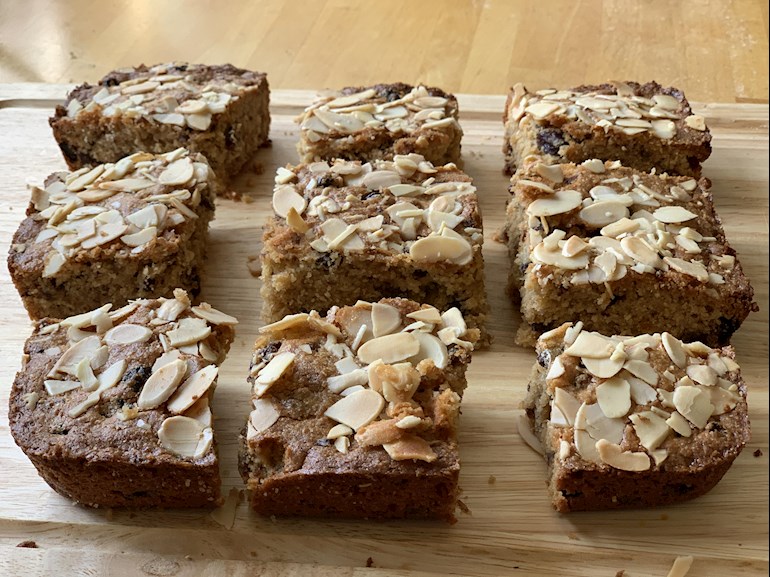 There's no success like failure and these are supposed to be biscuits LOL the good news is they taste real good.

I ground sesame seeds and quinoa in my coffee grinder, there was 75g and added that to 150g S/R gluten free flour 150g butter 150g currants 120g soft brown sugar 2 med eggs and 1/2 tea spoon of mixed spice. whizzed it all up in my food processor and spread in a baking tray with flaked almonds on top and baked for about 40mins on 150C.

I should really have made 2 trays of them but these things happen, they're perfect with a cuppa and especially in the garden. As you can see by the photo they don't exactly look like biscuits...but I can live with that. 😊

Enjoy your afternoon folks and life is what we make it so stay safe and well and enjoy the sunshine if you can.

They would go very well with Alpro cream, custard or of course swedish glace

Hey thanks Debs and you're a genius, what a lovely thought...😁

Ooh they do look good! 😋

Never mind that these don't necessarily look like conventional biscuits... The biscuit vs cake debate is far from over (are you listening, McVities?

These look so tempting that I've even written down the recipe - and I barely ever venture into the kitchen (MrDrivenSnow being largely responsible for our eats - and rightly so! 🍜🍝🍲🍱🥘🥙🥗🍛🍗🍔🍞🌮)

Hey thanks TheDrivenSnow and aren't you lucky. 😁

They look really good Jerry, it doesn't matter what they look like, it's what they taste like, as they say 'the proof of the pudding is in the eating'.

Hey thanks Alicia and I agree with that and I'm keen on puddings too....😁

Well who's not keen on a pudding, a melt in the middle gooey chocolate one😉😋

They look good Jerry! Just because the recipe said they are biscuits doesn’t mean that’s what they have to be! 😁

CallendersgalGuest in reply to Jerry

Haha, been there and done that! 😀

Awe thanks Zest and it's nice to see you about 😁

Thanks Hidden I'm enjoying them... 👍

Thank you for this recipe. I will try a version with teff and maple syrup as well as flaxseeds instead of eggs and report back to you. Happy Easter. Vx

Hey thanks TheMoaningViolet thats sounds a good swap and gram flour is a great egg replacer so lots of options. 😀

I think they look perfect Jerry I definitely would have one (or two!) Of those with a cuppa 😁

Awe thanks Northlondongirl thats appreciated and I do like my cakes...😁

Easter biscuits as the ones I made for Easter were more like cakes so to day I used ground almonds...

and whizzed it up in my food processor.

I spread it in a baking tray brushed milk on top and baked...

with some flaked almonds to top.

Whiz it up in a food processor and spread in a baking tray these...

up in a food processor spread dough into a baking tray top with flaked almonds and bake in a hot...

Healthy(?)Food for our Picnic Basket

Saturday Lunch/Brunch by the Pool😋❤️🌺