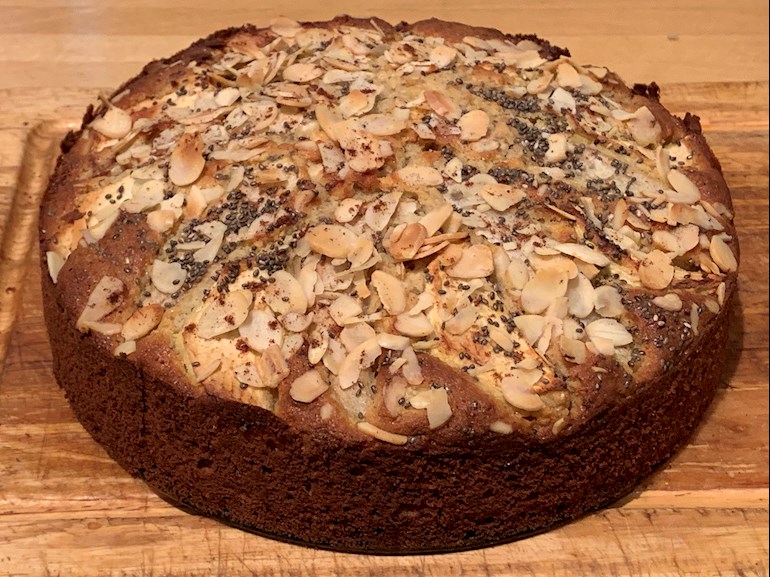 Here's the recipe I used except I added pears today:

I hope you're enjoying the weekend and take care if you have snow. ❄️ ☃️

Looks delicious Jerry. I’m having to avoid apples and pears at the moment, but think this might work with blueberries. 😊

in reply to Penel

Thanks Penny, I'm sure that it would be really good with blueberries I used sultanas last time and I think pineapple would be good too...

I look forward to hearing how you get on with a blueberry cake. 😊

in reply to Penel

Wow, this is lovely - I bet it is gorgeous with pear, but I also like Penel's suggestion of blueberries - maybe even both!

I am also very impressed by your 39 Plants eaten last week - that is brilliant, and I love seeing the different ones - believe it or not, I've started categorising mine via the alphabet - as Misslovely mentioned an Alphabet Plant challenge, and that made me wonder how many letters I could cover - I will therefore be listing mine that way - when I report back early next week - I think my week is going from Tuesday to Tuesday - I can't remember - but it's fun to do it.

I look forward to reading your list Zest. It's an intersting idea... l may join in the fun starting in Febuarary... too much going on to think of it right now. Granni B

Great, just join in whenever you want to, Granni B. In the meantime, you can enjoy reading the lists of the people participating - I have found doing this challenge is making me think of extra veggies or fruits that I might not have considered before - for example this week I bought a Mango - so I'm looking forward to having some of that. I have had mango before, but only rarely - and I just fancied some for a change.

Funny thing Zest, mangos are my grandson's favorite... he puts them in smoothies... and l have never eaten one... but now l will give it a try.

Misslovely's list is pinned in the Pinned posts - so easy to find as well.

Mango will be on next week's list, as I only bought it today - but it looks so delicious - I have 2 mangos infact - and looking forward to using them. Great that your Grandson enjoys them - and that they are his favourites. I can understand why - a very sweet taste - maybe you could try some to see what you think?

MisslovelyVolunteer in reply to Zest

Im finding that too Zest ! Id never have tried Artichoke nor celeriac but ive opened my eyes to iffere t veg other than my ‘go to safe’ choices! 💚

Zest in reply to Misslovely

Absolutely, it's a great Challenge.

Thank you Zest, It was Penny who told me about buckwheat fruit cakes and me being me thought I want some of that...The pears with apples are a great combo as I've tested it, it has a relatively low sugar level which I like.

I listed my plants in a slightly chaotic manner and was impressed that Misslovely is doing and alphabet challenge, as its such a great idea and the incentive to try something different which this whole 30 plants+ has already done that for me, so I think I will also have a go at the alphabet challenge.

I believe that you have eaten the most plants at 51 which's a great accomplishment. So very well done you. 😊

Your cake looks scrumptious and you have a very interesting list of plants today.

Celebrate your weekend & remember this Sunday is the Blood Moon. Granni B

Thank you Granni B and good morning to you, thanks for telling me about the blood moon I love things like that hopefully the skies will be clear here. 😊

Blimey that looks good! I do love pear 🍐

Let us know how good it tastes 🥰

Thank you Misslovely, it went down a treat...😀

Thank you Ali, I'd recommend baking a cake with pears and interesting it's based on a N Italian recipe apple/plum/pear almond and buckwheat cake Trentino Alto Adige which's the region it is a delicacy...And you just happen to be in Northern Italy. 😀

icing. I bought some dried pears and made a cake with them and almonds and it turned out a treat....
•
17 Replies

Cruelty to fruit and vegetables?

Dessert for the week.