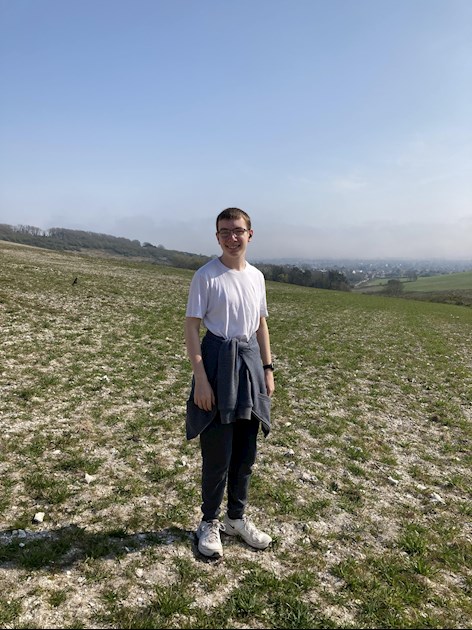 I’m a little surprised with myself but Ido want to encourage my grandson to get out in the fresh air as teenage boys will stay inside every day if they didn’t have annoying nannies dragging them out.

After work I messaged him to say I’d be half hour, changed into running shoes and leggings and went to pick the boy up

Apparently there had been a lot of huffing and sighing before i got there, so, I offered him the choice, beach, roads or downs, he plumped for the Downs, I knew he would, hills and stones on my poor little tired legs

We set off to NRC first run, grandson seemed to be enjoying himself, it was very slow for him because his legs are at least twice as king as mine, but he kept going, When coach asked the question “why did you want to run today?” my grandson piped up “I didn’t” 😂

Ten minutes in we turned around, quick stop to take a photo and blow me it looked like miles of uphill track to go back, but the air was warm, mist denied us the view of the sea but we both agreed it’s the best place to be

Slow and steady, he only stopped to play with a poodle, but he caught me up and run over we walked the last bit back to the car .

I am thankful every day I can walk let alone run, and today was beautiful, been long and busy at work, that short run worked it’s magic

Oh wow! So well done! (Not only the run, but much more impressive is getting a teenager out and on a run... that’s superpower strong!🦸‍♀️💪👏👍🏽) 🤣🤣

WillowandSolaGraduate10 in reply to CBDB

Thank you, he has been heard to say “nannie is so athletic that’s where i get it from”

He’s been doing c25k but not exactly following it just run a bit walk a bit, and he took a short walk break,

That's a lovely photo of your grandson. It's great you are encouraging him to get out and be active. I think he must be very proud of his nannie

For some reason he is! he took his mum fir a bike ride the other day and she wasn’t sure she’d ever walk again they went miles

That’s so lovely you went out with your grandson, how precious is that! It sounds like a fabulous run. Great photo of him, too! 👏👏👏🏃‍♂️🏃‍♀️👍

It was very slow and tough up hills but fun to go together, we’ve missed a lot of time together this year, he’s just too old to child mind now

Great phot of your grandson and well done getting out there again. Happy running to both of you 😀

WillowandSolaGraduate10 in reply to Doris8

How fab to run with your grandson! Ace photo too!

I may be running with one of mine in May...and my son and d-in-law!

Well done on another after work run, glad it worked it’s magic for you 🥰

Works ridiculous at the moment so short runs give me peace, Oh you will enjoy running with yours too

Oh, there’s nothing quite like a run that works its magic. Well done Sola and grandson! 😊

Thanks, it was good to be there although harder than round the roads on the flat but will make us stronger

Fantastic Sola! What a brilliant run and with your grandson too - hopefully he’ll want to repeat it! My nephews both run but I haven’t run with them yet - they’re half my age, much fitter and both have very long legs! But they’re proud of their aged Aunty’s efforts and who knows, when parkrun starts again maybe I can go and do a tourist run at their local event!

That would be wonderful for you, Richard is almost 6ft now and was running really slowly with me and kept going Let’s hope we can get more back to normal over the next few months, it will be bliss the day we don’t have to change when we get to work and leave, and for some seeing friends and family will be joyful

Ah, love this. What a fabulous nannie you are and as someone with 2 of the teen boy variety I can tell he clearly loves you very much if he agreed to run with you. Grandparent goals!

Thank you I think he’s just very like me and a bit nuts but the weather has been glorious so it’s easy to want to be outside and once out you might as well run eh? 😀

Well done for having the energy let alone the inclination ! So lucky to have three choices for a run too. A run you both enjoyed and one you will both remember - memories are made of this !

WillowandSolaGraduate10 in reply to 59er

When they were little we used to run across the park and as they got bigger suddenly I wasn’t going slow so none of them were last I was going as fast as i could to keep up, wind forward a dozen years and he’s the youngest and still loves to come out with me,

He will treasure happy memories of running with you which will also keep him healthy!

What a good opportunity to spend time with your grandson. I do hope he goes out with you again - even if he doesn't take it seriously now, he might think about it later in life. And a nice place to run even though it's stony and hard on the feet.

Thank you, we always love being on the Downs, you can see for miles on a clear day, he does cycle with his dad so some running and chatting is great, don’t think he will be up early enough this morning though fir a quick run before work

Haha, no, boys and early mornings don't often go together. Hopefully he'll come out with you on another occasion though.

Oh Sola what an amazing thing to do, I really can’t think of a more pleasurable thing to achieve. I’m still at the stage of running across the park with my grandson who’s only 7😀. That’s really something to look forward to. Great to see and read, let’s hope he has a new found sport to enjoy.👏

He comes out every so often, lockdown limited us but we can still be at a reasonable social distance

That's lovely, he wouldn'tbe a teenager if he didn't complain a little bit but he came and he ran so that's a definite win...I bet he's pretty impressed with his Nannie really 😊

WillowandSolaGraduate10 in reply to Run46

I’m always surprised but he is, he tells his mum how athletic I am and that’s why he is, and he didn’t even hint he didn’t want to come with me to me

What a lovely relationship you have 😊

WillowandSolaGraduate10 in reply to Run46

Sounds like you and your grandson had a lovely time. I think you should have a medal for encouraging a teenage boy out. All the teenage boys I know don’t seem to leave their bedrooms and gaming stations! 🤣

WillowandSolaGraduate10 in reply to Dups

Apart from dog walks, cycle rides and the odd run he doesn’t often leave his lol

How lovely to run with your grandson ! 😃 great to get them out into the fresh air .Hopefully I will see a little more of mine after 26/4 and I will suggest a ‘grannie run’ , m not sure they believe I can 🏃🏻‍♀️🏃🏻‍♀️🏃🏻‍♀️

These short runs sound good , I go back 3/5 and wonder when I’ll fit everything in again 😂

It’s hard work fitting everything in around work, I’m so lucky that mine are teenagers and live locally so although not seen as much of them as before we have managed to meet up outside for socially distanced dog walks and the odd run

I didn’t need to argue with myself about going for a run this morning! A glorious morning. I...

there and run. Well, it was actually 32 minutes as I chose a Nike Run Club guided run ‘Running on...

I know it’s good to mix up your runs, so today was my Zone 3 run. I thought 45 minutes would be good

determined to run. I was thinking 10K would be good, so looked at the Nike Run Club guided runs and...

for a run comes into your head you feel guilty if you don’t go ! 😬

It started with a run 😀