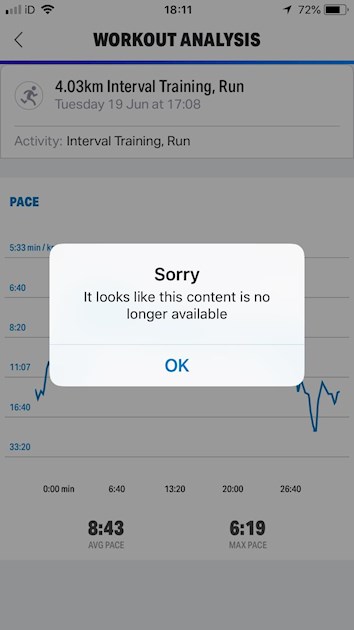 Feeling very frustrated right now as it appears MapMyFitness just ate this afternoon’s run! It went from showing me this message to showing me nothing at all for today 😠

For the record, I ran by the river, and including a short warm up, 25 minutes running, and a 5 minute cool down I covered 4K. And because it was by the river, it was flat and the pace looked pretty even (for me) although it did slow towards the end.

It was a bit warm out there, but I did find some shade for the first half, which I was very grateful for.

Currently very hot and sweaty and really looking forward to being able to actually have a shower as I haven’t been able to get my scraped elbow wet for the last 8 days. Apparently my ‘graze’ was more like a friction burn and I’d taken a good layer of skin off 🙄

Oh, bum, that's so disappointing! It really is worth getting a good running watch. It's often possible to pick them up very reasonably on eBay when someone gets doesn't stick at running. Mind you, I still managed to leave my Garmin on swim in the early days of c25k, and another time forgot to change it from treadmill, and in both instances had a record of the time and nothing else! Anyway, you had a fab run for all that x

I do own a Garmin Forerunner 110, but the charger has broken - the clip snapped - so I’m trying to use it as little as possible.

FlickM3Graduate10 in reply to Maddee_6333

what a pain. I think it's worth contacting Garmin. Some people say they have helpful customer service, and they may provide a solution or a replacement, even if the watch is old. Worth a try: nothing ventured and all that

It’s on my list of things to do. Currently I make do by holding it in place 😆

How annoying, but you did it, well done

It's good to see your progress. It's frustrating when tech fails I know. It makes me feel like I've been robbed of vital evidence, but then I realise the only evidence I really need is the effect it has on my wellbeing/fitness and the knowledge that I did it. So we'll done! 😀👏👏👏

I particularly like that one as the brief glimpse I got of it showed I’d run at a fairly consistent pace - probably because of being dogless 😀.

But yes, knowing that I did it is usually enough for me 👍

How annoying! Well done on the run 😀

It really was. Thanks!

How you getting on?

Not back to running properly yet 😡. I wrote a post yesterday but the app gobbled it up! Will go and write one now before next guests arrive.

but I soon warmed up once I got going. It was a pleasant run, I felt strong and feel very ready to...

I must admit I did shed a tear after completing it 😢😢 Although I won’t be able to run the...

Well as this was a day of firsts I wore my new running...

light was able to run on the Common. I knew I was limited for time so wasn’t going to be able to...

amazing ladies. I have Just been out for my second run of week one. It felt good and I am so glad I...