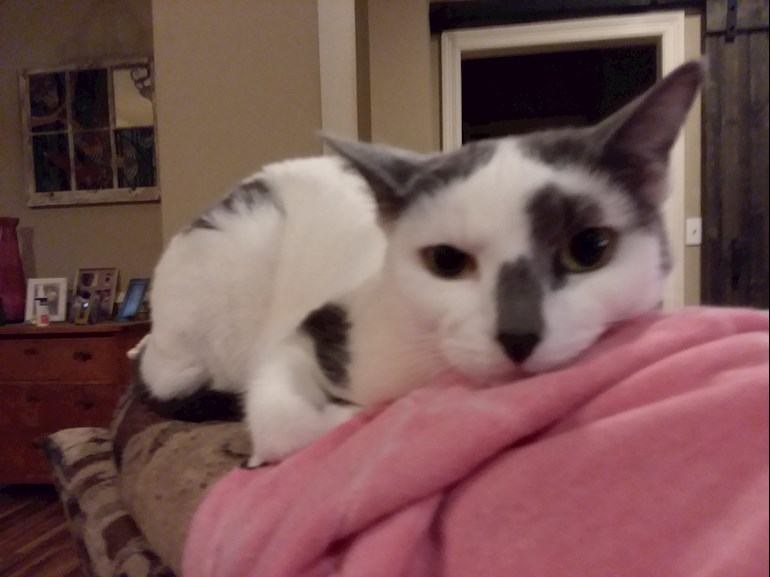 <4 hrs sleep again, I have to put off what i had planned today (it takes brain power I just dont have today).

My attitude is i get it done tomorrow so what. And this is my Gia, i call her GiGi. She is my super special companion and gets me through days like this. She's a crazy one so dont let that innocent face fool ya. She has Minnie Mouse ears.

Wishing you a wonderful day. 💕😊

Our resident fur ball is 'Betty the Bold'....she runs the house, she is also bonkers at times. She gets really excited when she here's the car come in the driveway and runs up and down the hall at light speed, slides on the hall carpet to a dead stop up against the wall. She growls at anyone who comes to the door she doesn’t know like a watch dog. Then when she wants something...she lets you know verbally at first, and if that doesn't work she very slightly takes one claw and lets you know...she's gentle but gets her point across, pun intended. She snores when sleeping and coos when being pet along with purring, it's very soothing.

Betty the bold. love it. 💜 I'll call mine Ms Princess cause she thinks she's entitled. its all in the attitude. Your sounds pretty crazy too.

Does she eat toilet paper, mine does. I'll never get that one. 🤣🤣

yes....they are entitled....we are only there to serve.... and when Betty was a kid...yes...she would unroll the entire roll of toilet paper and then drag it all over the house attacking it as she went....great fun, but what a mess.

All bags I bring into the house she has her fill with. Plastic, paper it doesn’t matter. Spray some cat nip in it and it’s all she wrote. Endless laughs and enjoyment watching her have fun.

Did you know that spider plants are cats version of pot plants? I kid you not, you have to read up on this one. Even though we bring grass in for Betty, we would still find her munching on the spider plants...then she would get really happy all over the place...we asked the vet if the plant was toxic as we don't have any plants around that would hurt her, we didn’t' think spider plants were a problem. The vet said they act like a drug on her, but won't hurt her. We try and keep them away from her....I don't think it's good to be letting our cat get high....we don't, why should she have all the fun....I mean really....this was a new one for me.

Here's an article about it from a garden site:

Spider Plant Toxicity You may have heard about the so-called hallucinogenic properties found in spider plants. Maybe not. But, according to some resources, studies have found that this plant does, indeed, give off a mild hallucinogenic effect to felines, though this is said to be harmless. In fact, the spider plant is listed as non toxic to cats and other pets on the ASPCA (American Society for the Prevention of Cruelty to Animals.) website along with many other educational sites. Nonetheless, it is still advised that cats eating spider plant leaves may pose a potential risk. Spider plants contain chemical compounds that are said to be related to opium. While considered non toxic, these compounds can still result in an upset stomach, vomiting and diarrhea. For this reason, it is recommended that you keep cats away from the plants to avoid any spider plant toxicity, regardless of its mild effects. Like people, all cats are different and what affects one mildly may affect another quite differently.

Read more at Gardening Know How: Spider Plants And Cats: Why Are Cats Eating Spider Plant Leaves And Can It Be Harmful? gardeningknowhow.com/housep...

This is interesting. She eats grass and I thought that was bad, or is it? She usually just throws it up.

I’ll have to read into this. My GiGi high would be something to see for sure. She’s already high on Cat Life. 😄😄😄😄

my dog eats grass regular as far as the vet told me its not a problem feeding cats n dogs different foods can give them an upset tummy so its like them clearing the system.

I heard that too. I had never seen a cat do it. My two labs do it, well one of mind eats everything, and I mean everything. 😁😁😁

The grass is like an herbal for their tummy, and helps them to throw up whatever is making them feel sick, so that's normal. Just make sure there are no snail pellets, fertilizer, or weed killer on the grass they eat and they are doing what they would normally do to make them feel better.

She hangs around the door and doesn’t venture too far from the unfertilized patch of grass she likes to roll around in. She got spooked last year and hated outside, this year she’s getting better about wanting to go outside again.

Same here....we let Betty out occasionally when it's warm and she does the same, rolls around and then just goes back in. She's not interested in being an outside cat ... she too is a princess.

Don't know what I would do without my lovable and funny Fur Baby. He has been with me 11 years and brings me so many smiles and comfort. Cats eating grass is natural as is the vomit that often follows. **ALSO of note. If a cat is hungry and anticipating eating and it does not happen within 20-30 minutes they will also vomit a kind of bile from their stomach that was expecting food.

That's good to know, I didn't know they did that...Betty thinks she is entitled to eat on demand.

My cats a Grazers. They get wet food and also I leave out crunchy/dry food all day and night. Both my cats are lean, wish I could eat like that and stay that way. 💜🌺

I had 3 cats, 2 geratric that have passed over the rainbow bridge after long lives but my current 14 year old flame point blue eyed Siamese contracted full blown diabetes from eating too much Costco's Kirkland kibble and it took a year of Glucose testing and insulin shots feeding only wet cat food only to bring him into full remission.Now he only gets kibble as a treat!

That’s amazing how that brand/kind of food could do that. I’m so sorry you had to go through that. I’m so happy and relieved your cat is in remission.

My cats get wet food in the morning and again in the evening. They snack on the dry food. I’ve tried once a day feeding, they never eat all the wet food for example in the morning. actually no matter the number of times I feed, probably why the graze they way do.

So glad your baby is healthy. 🌺

Roxie, It is much preferred for them to eat several meals a day as it helps regulate their pancreas for insulin. I feed him 3 times daily wet food. When a cat does not eat it is much more dangerous than for us missing a meal. Glad there is no shortage of Friskies Pate!

Oh, I just found your email and all the other lovely posts. I learnt from them too.

I feed my two cats wet food in am, again in evening, I always have snacks out, for them. I buy grass in a container at Walmart, one grows it ones self, my cats love it, I also understand it is good for pushing fur thru their systems so they can poop it out. When the weather picks up they will go outside and eat my un- polluted grass, I believe the chlorophyll in the grass is also good for them. I have had cats for almost 50 years now, all so interesting and individual in temperament. I have a 14 year old, born feral in my back garden in Calif. Had a stray that showed up and adopted me, he was so funny and loving, had a massive stroke when he was about 7, had to part with him, I still miss him. I have a 5 year old who showed up as a kitten on my deck. I call her Sprinkle as it was sprinkling with rain the day she came and I needed a name for her. The old ones name is Zebra, I called her that as she has a lot of stripes. Neither one are lap cats, but they do keep me good company, and sleep with me at night. They are what helped keep me going thru the last Clinical Depression I went thru, it was hell for 3 years, now on the right med's and with a wonderful therapist, I am alive again, enjoying life and very happy everyday....I send You All Peace, whole health, love and big hugs.....Sprinkle 1.....xxx

but I can usually get past them in a short amount of time. But recently, I can't get rid of this...

A Picture of my Cat to Help You Smile!

Marnie. She thinks she is a Princess because she IS. She expects to get pet 24/7 because she DOES....

good job its winter. Its getting to the point again where its more than once a day and I've been...

Help what I do with my cat?

Hello i tell you

A few days ago my family and I adopted a cat, my family is not characterized by...

eaten for at least a day, and he eats 2-3 times a day usually.