Help with results: Hi All, Looking for some help... - Thyroid UK 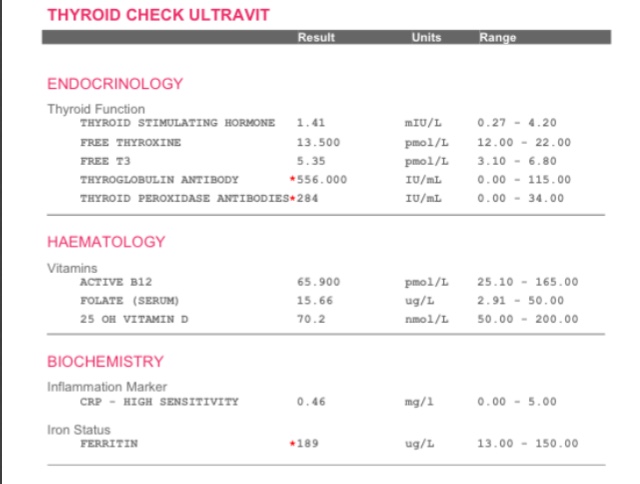 Looking for some help with some results, so in April after 9 months or trying everything to lose weight and it not budging I spoke to the doctor. Without asking any questions he laughed and told me not to eat so much! So after researching I found thyroid and realised I had quite a few symptoms, brain fog, forgetfulness, feeling the cold more, lack of weight loss and on and off my throat feels like it is swollen. I got my own medi checks done in May -

So I started Gluten free, dropped milk and started taking supplements. I'm currently on 10,000mg turmeric, 200mg selenium and a probiotic. I have just done the full Vit plus as I hadn't checked this initially. Results attached, doesn't seem that much has changed, I'm disappointed that the antibodies have increased albeit not massively.

My questions are - is there any advice on my results? Should I be taking any vitamins?

Medichecks said my iron is too high and thought I was on a supplement - I'm not. I do eat a lot of mince for my dinners but I don't think that would add to it? I'm not sure why this would be?

Gluten - I first read that it reduced antibodies now I've started reading that it doesn't reduce antibodies but it alleviates symptoms, which is the case? I'm considering trying to introduce gluten to see if it does impact symptoms and if it does I'll know to stay off it but if it doesn't then I wouldn't have the intention to go gluten mad but it would be nice to have a curry now and again!

The main symptoms I have is brain fog and the weight issue, the fog really cleared up on holiday and I'm wondering if I need Vit D?

Any help is much appreciated 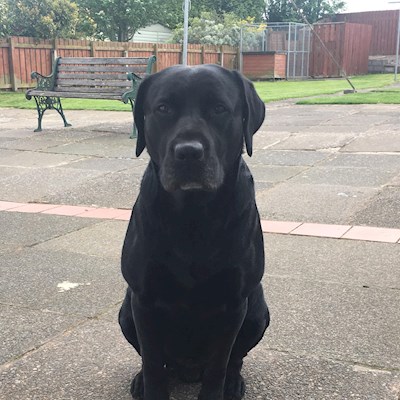 Joanne82
To view profiles and participate in discussions please or .
Read more about...
9 Replies
•

Well, you definitely have Hashi's, and the antibodies will continue to attack your thyroid and gradually destroy it. The advise is always to try gluten free, many members have found that over time it reduces the antibodies, and the selenium should help too.

Your FT4 is low in range but unfortunately your results currently wont get you a diagnosis of hypothyroidism.

As for your vitamins and minerals

ActiveB12 is on the low side, according to this article, anything below 70 indicates the need to test for B12 deficiency viapath.co.uk/our-tests/act...

You can check for signs of B12 deficiency here b12deficiency.info/signs-an...

Folate is a bit low, recommended is at least half way through range so that would be 26.5 with that range. You could supplement with a good B Complex (eg Thorne Basic B or Igennus Super B) but if you have any signs of B12 deficiency then delay starting the B Complex until after further testing, folic acid/folate masks signs of B12 defidiency.

D3 aids absorption of calcium from food and K2-MK7 directs the calcium to bones and teeth where it is needed and away from arteries and soft tissues where it can be deposited and cause problems such as hardening of the arteries, kidney stones, etc.

D3 and K2 are fat soluble so should be taken with the fattiest meal of the day. Magnesium helps D3 to work. We need Magnesium so that the body utilises D3, it's required to convert Vit D into it's active form. So it's important we ensure we take magnesium when supplementing with D3.

Magnesium comes in different forms, check to see which would suit you best and as it's calming it's best taken in the evening

Check out the other cofactors too.

Thanks, I don’t know how you guys retain all of this information, it’s so overwhelming! Just a quick question, what’s the difference between testing for B12 deficiency and the test I’ve just had done? Can this be done privately as my dr is not the best!

SeasideSusieAdministrator in reply to Joanne82

The test you've had done tells you that your blood is showing Active B12 is low. It doesn't tell you that you have B12 deficiency or Pernicious Anaemia, those are different tests.

If you look at the link I gave you there are further tests for B12 deficiency suggested if Active B12 is below 70. They suggest testing MMA (Methylmalonic acid) and I believe homocysteine should be tested for too. That link is for Viapath and they do testing at St Thomas' hospital in London I think (look at the link for information), Medichecks also do it. But GPs should go by symptoms initially, so did you check the link for symptoms, do you have any? If so then list them for your GP and ask for him to do the test for B12 deficiency, why should you have to pay?

I did and I don’t really bar the forgetfulness and I would say it’s more in line with the brain fog. However my mum just got her tests and her B12 is lower than mine and she has multiple symptoms. She has just had a brain scan that was clear for a lot of her symptoms but they haven’t tested B12, I’ll encourage her to go back to the dr and get a test. With regards myself if I don’t have the symptoms is it safe for me to supplement with a complex?

SeasideSusieAdministrator in reply to Joanne82

Out of the two I mentioned, I would go for the Igennus Super B Complex as at the recommended dose - 2 tablets a day - that gives 900mcg methylcobalamin (B12).

You are a star thank you! I’ll order some now 😀

Your vit D is a bit low, yes. But, the main problem - apart from your antibodies, meaning you have Hashi's - is that your vit B12 is very low. I think you ought to get checked for Pernicious Anemia.

Does gluten-free reduce antibodies? Is there any advantage to reducing antibodies, anyway? There's a lot of misconception about antibodies. People think that it's the TPO/Tg antibodies that attack the thyroid. But it isn't. These antibodies come along after an attack to clean up the TPO and Tg that has leaked into the blood during the attack. That's why they're highest after an attack. Then, they go low again. And, the become less abundant as more and more thyroid is destroyed, and there's less to attack, finally disappearing when the thyroid is completely destroyed. So, how do you prove that gluten-free has lowered them? You'd have to test them everyday and keep a record.

What is certain is that a lot of Hashi's people are gluten-sensitive and feel better when they remove gluten from their diet. So, it would be worth persevering if it makes you feel better.

Your doctor was asking for a slap round the kisser! How dare he laugh at you and assume that you're over-eating? I think I would complain about him, if I were you. Most unprofessional!

Joanne82 in reply to greygoose

Thank you for replying and yes the Dr was ridiculous! I was going to a PT at the time who spent 2 months convincing me something wasn’t right and I should go to the dr so after getting the courage up to get that lecture made me at the age of 35 sit in the car and cry! I’ve switched drs now, still not up to spend on thyroid issues but she’s much more sympathetic and not dismissive!

greygoose in reply to Joanne82

Well, that's good! Trouble is, they know nothing about nutrition etc. But think that because they're doctors they know everything there is to know, and their word is law! Unpleasant people!

attached the recent results from BH. I am on 100 levo plus taking supplements and gluten free. I...

blood results were ok. However about a year ago I started to feel much worse especially brain fog...