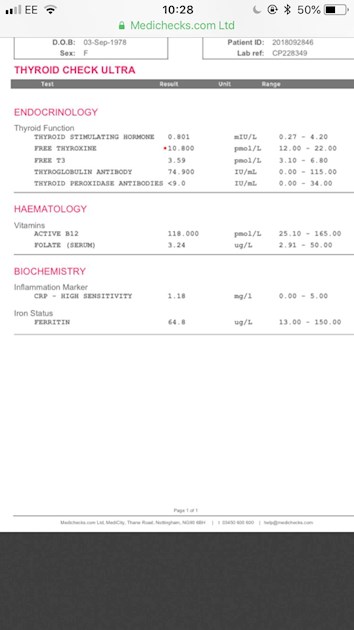 I’ve just received my medichecks results & need help from you lovely wise people please!!! I feel like I’m starting to loose my mind. I’ll try to keep this short, but things have got complicated with my private endo.

I’ve been chronically ill for over 2 & a half years now, with so many symptoms but pain, exhaustion & brain fog being the most debilitating.

I have been seeing a private endo, who I don’t have full confidence in but according to the list on TUK he supports NDT. At the last appointment I had my head set to argue for full bloods & an ultrasound, but he suggested I get some T3 & he would support me trialing it. If it didn’t work then he would do more tests, &/or look at low level steroid treatment (as I had a normal results short synacthen/ACTH test done, but felt GREAT after the steroid injection & had my first pain free days in over 2 years!!) which he said could indicate my adrenals are struggling, although the test was done late afternoon & is supposed to be done early morning!! I got saliva tests today though & will do them tomorrow!

Sooooo I have T3 on the way (hopefully! It hasn’t arrived yet from Turkey) but after doing so much research, it looks like it’s more normal that T3 alone treatment is usually a last resort. I’m worried because my endo said to take 10mg once a day & he would monitor with bloods. But that isn’t making much sense with what I’m reading, plus I’m worried that it will mean my body stops making T4?

When I questioned jumping right to T3 & not NDT he waved his hands & dismissed the idea. I wish I had pushed him on it, but was having a very bad brain fog day & he flummoxed me with jumping right to treatment without a diagnosis!

Would I be better self sourcing NDT? Or trying to get him to write me a prescription?

Also, which supplements are good to get my other levels up higher? Is that B12 level enough?

All help very much appreciated, as I’m feeling very conflicted about following my endos advice with the T3 or self medicating with NDT......esp as I don’t have an official diagnosis but feel sooooooo ill, but all my results are mild or ‘normal’! 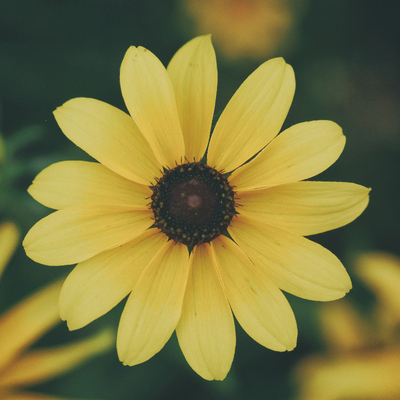 Rainbownut
To view profiles and participate in discussions please or .
Read more about...
5 Replies
•

Has Central Hypo been mentioned? This is where the problem lies with the pituitary (Secondary Hypothyroidism) or the hypothalamus (Tertiary Hypothyroidism). This should be considered when TSH is low/normal/slightly elevated and FT4 low. It would seem to fit with your current TSH and FT4.

BMJ article, you can read a small part of it (click on Read More) and your doctor should have access to the full article

This one has no restrictions

I wouldn't rule out Hashi's. Your Thyroglobulin antibodies, although in range, are rather high. I am not Hashi's, have had both antibodies tested several times over the years, neither of them have ever been higher than 12, mostly a lot less.

From a quick look, then central hypothyroid makes sense & fits my symptoms. I’ll do yet more research......with my poor struggling foggy brain!! 🤪

Would it still be an endo I would need to get it diagnosed & treated then? I’m wondering if my endo suspected it, but it seemed that he was thinking that rather than wasting time with more tests, let’s just go to trying treatment & go from there?!?! He was reluctant to write a prescription as his advice was not NHS advice, but said he would if I needed it. I’m only guessing that is why he maybe didn’t want to try NDT first, as he would have had to commit more by signing a prescription. SIGH at the mess of it all!!

He absolutely needs to 'waste time' with more tests if he suspects Central hypo! What sort of an endo is he? Doesn't he know that the pituitary makes more than just TSH, and all those other hormones are likely to be low, too, causing all sorts of problems? They need to be tested. If it's Central, you need to know.

The treatment for thyroid would, of course, be the same as with Primary hypo : thyroid hormone replacement. Bad idea to jump straight into T3 only - although I don't think that would change the amount of T4 your thyroid is making, because it's hardly making any, anyway. But, it's still a good idea to start with levo, and see how you go on it. Then if you need T3, add it in - it will make your life considerably easier in the future if you do well on levo, because you won't have to fight with ignorant doctors for the rest of your life! And, besides, starting on 10 mcg T3 a day is not recommended. 5 mcg to start with, increasing by 5 mcg every two weeks, is more normal. So, I don't think I would have much faith in him, either.

NDT would be a better option than T3 only to start with, but even then it would make your life more complicated. So, it really is a good idea to try levo before anything else, from a practical point of view, whatever the cause of your hypo.

Like greygoose I don't see why you wouldn't start on just Levothyroxine. Initially at 50mcg. Retesting in 6-8 weeks. Increasing in 25mcg dose increase until FT4 is towards top of range.

If FT3 remains low, then look at adding in small dose of T3

Your folate is low. You might benefit from adding a daily good quality vitamin B complex

If you are taking vitamin B complex, or any supplements containing biotin, remember to stop these 3-5 days before any blood tests, as biotin can falsely affect test results

If so, do you also include magnesium and vitamin K2 Mk7 as well

because I have headaches cant sleep and have had a cough for about a year I still feel tired with...

my T3 results which my endo insisted on as labs refused to take them as I self medicate so endo...

please help! pregnant on NDT and CONFUSED by blood results

what do my antibody results tell you? i got these tests done via bluehorizon privately and just...

unknown as they don't test it there (will have it checked in a weeks time with a private lab)....
•
18 Replies

Trying to work out which to treat first? (Subclinical hypo a...