Done. W9R3 completed and I am elated. Was told by the physio that I'd never run for fitness since diagnosis of knee osteoarthritis grade 4. Told by the surgeon there was nothing I could do but keep slim and book in for a partial knee replacement. So I stopped moving, got depressed and put on a stone and a half. After a lot of reading up on running and OA I started C25K, still thinking it would be a triumph if I manage to run/walk a bit. Nine weeks later I'm a runner - no knee supports, no painkillers. The programme was sufficiently gradual to accommodate my knee but, as we all know, it pushes you too! It's been great to read about everyone else's progress and I can't wait to join the consolidation club. 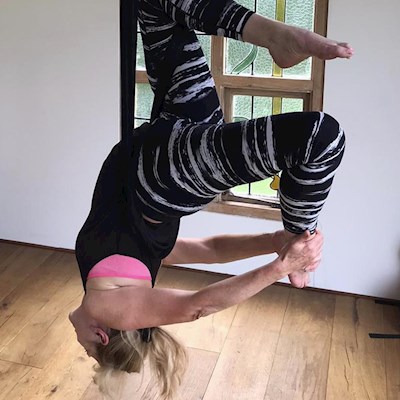 Aerialgazelle
Graduate
To view profiles and participate in discussions please or .
Read more about...
43 Replies
•

Thanks Poppdog - yes I think it will be happy (even though they still feel like hard work at the time!).

A very inspiring post from you, congratulations on completing run 3 of week 9 and graduating from C25K, well done, to get your graduation badge and the word GRADUATE 🎓 next to your username leave a message in the pinned posts on the right side of the healthunlocked September graduation C25K home page and tell the administrators that you have ran W9R3 of C25K and graduated 🎓 🏃🏾 👍

Thank you so much - yes will do

Congratulations on your graduation 🎉🎉🎉Very inspiring , I hope your knee stays strong for you

AerialgazelleGraduate in reply to Instructor57

Thanks - I shall claim my award with pride!!

Many congratulations on your graduation, fellow runner.

This guide to post C25k running may be helpful healthunlocked.com/couchto5...

To get your Graduate Badge leave a message at this month’s Graduation Badge Post, which you can find in the Pinned Posts here healthunlocked.com/couchto5...

Woo - fellow runner - I like that! Thanks for the link - and all the further links in the article. I love reading up about running - keeps me focussed and enthusiastic.

Wow! That's a massive achievement, especially given the opinion of the medics! Congratulations! 🏃‍♀️🏃‍♀️🏃‍♀️🏃‍♀️🎉🎉🎉🎉🥳🥳🥳👍

Thank you. But you do ultramarathons?!? That's just off the scale and way beyond my imagination...

Yeah, it has changed my perspective on things like a 10k or half marathon. I did a lot of it by just doing a couple of 5k runs and one gradually increasing long run each week. Mind you, for maintaining health, I’ve heard that 5k three times a week is all that’s needed.

I still think you’ve done a great job getting to 5k. Do you have any plans for what to do after your consolidation? I’ve no idea if longer runs would be good or bad for your knees.

I think my plans are simple for now. If I think about, say, the 5 to 10k and I find it's too much, I'll get disheartened. Just did my first consolidation of 30 mins and Fitbit told me I did 4.98km - which I don't believe. I don't think it has taken into account my smaller strides. I did one run a couple of weeks ago on a treadmill (in a baking hot gym) and was a bit upset to find I had to set the machine at 8km/h. So, I'm going to try to bring in a few more treadmill runs (though that last one rather put me off) and edge that speed up a bit without compromising the new stride pattern. In a couple of weeks, I'll do a Parkrun - just researching which are the least hilly in my area!

Love the way you say you gradually increased from 5k - that's a long haul up to marathon and beyond....!

That seems a good plan to me. Parkrun is a great way of adding in some variety and running with others. As for Fitbit showing your distance as just under 5k, I’ve started a habit of running 30m to 40m past my target distance so that, if it gets rounded down, I’ve still recorded a full 5k etc. Incidentally, are you aware that most people don’t achieve 5k in 30 minutes at the end of C25k? You’re doing really well to have achieved that already!

The treadmill is a great way of setting an exact pace but it seems that intervals are the recommended way to speed up. To start off with, you could try something like adding in 100m at an increased pace in the middle of your run. Something like the Nike Run Club is free and that includes audio guided runs which seem to be a good way of working on your running. Maybe best to do some more consolidation first though!

As for gradually increasing, I basically followed the 10% rule (i.e. restricting increases in my long run and my total weekly distance to no more than 10% a week and having a cutback / consolidation week about once a month). That way, I was able to double my distance every couple of months. So, at least in theory, it’s possible to increase from 5k to HM in about 4 months. I think it’s good practice to listen to your body and to avoid pushing too much too quickly.

That's full of really good info and advice - thanks so much. Yes, I'll consolidate for a bit then look to progress as you suggest plus take a look at the Nike app.

How fantastic! 👍😀👏 Congratulations are in order….and well deserved.

How kind of you - thank you. I might try running with my dog now, if he's up for it!

Well done! Medical opinion changes over time. Sadly many professionals don't (or don't get chance to) keep up to date with new developments.

Yes it does. I've done lots of reading and listening to podcasts. My favourite slogan is 'motion is lotion' and the knee always feels better after about 10 minutes of running.

So good to hear, and yes! You are the biggest expert on your body! And so we’ll done to have the courage to start on your own health journey!

Wishing you and your knees strength, running and happiness!

AerialgazelleGraduate in reply to CBDB

Ahh thanks so much. Yes, that's a brilliant point - we do know our own bodies best. I should say too that I've taken advice on strengthening the muscles but we have to do the activities that enthuse us.

Very inspiring! Pleased for you. Enjoy your future runs ahead.

Thanks Cazrun. I really do think I will enjoy this running lark!

Congratulations. 👏. Like you I also have arthritis in my knee and always used it as an excuse not to run but again like you I found this program and completed it knee pain free which was very surprising.

That's brilliant to hear. I read your post about the treadmill the other day. After that, I did one treadmill run of 25 mins (all other runs done outside) and it nearly freaked me out! Realised I was going much slower than I thought! But I want to get into treadmill too for rainy days.

Woo hoo well done! Great story. I too have had a knee problem for 8 years, operation did not fully sort it out and there was a constant ache and occasional pain. But running did sort it out. Counter-intuitive I know. But if I stop running for a few days, I feel it start to come back - now there’s an incentive to keep going!

Woohoooo!!!! Very well done on your achievement 🙌 and well done also for not just accepting what you were told about limitations.

I have had major spinal surgery and was told I would be limited even in walking distances, let alone running - which I was told would be "impossible" both by surgeons and physios. I graduated at the end of August, nowhere near 5k but running 30 minutes, and I look forward to seeing your progress in the consolidation club.......I could be there a while!!!!

Goodness! What a story you have! I find it so helpful to hear about other people - before C25K I felt a bit alone with a vague longing to exercise in a way that I found motivating. I plan to consolidate for a while too. I mean, 30 mins or 5k 3x a week - that's pretty darn good isn't it?!!

Absolutely! I'm finding each run a little bit easier, but am in no hurry to crank things up as I don't want to end up injured - I know how tough it is to recover and don't want to jinx myself!!!!!

Well, finding it a bit easier each time is proof of improvement - so result!

Absolutely. And I'm more than happy to be the tortoise rather than the hare

Dear tortoises take life slowly but perhaps that's why they are so very long-lived! I'm no gazelle at running by the way - only called myself that cos I just found aerial yoga.

Wow! Your experience is really interesting. My partner is due a knee op soon - he seems to think it will sort it - as many people do. Been trying to convince him that the exercise side of things is of paramount importance in pain management and knee care.

AerialgazelleGraduate in reply to 00marks

Congratulations! Like you, an arthritic knee stopped me from running until this year. I was quite worried about injuring my knee when I started c25k but to my amazement things have improved. To be able to run for 30+ minutes is such an achievement, to feel strong is even better!Well done 😁

It's incredible what we can do eh? Your name makes me laugh as I feel just the same!! I'm still at the stage of crossing my fingers about the knee rather than trusting it 100%. Like, one day, it'll all go horribly wrong and people will say - there, you were told you shouldn't pound the pavement, you were told not to dance...now go away and be an old person. So, reading that there are others out there with the same condition and enjoying the exercise they want to do is fab-u-lous!

My knee has behaved so well I’m considering changing my name 😂🤞🏻🤞🏻🤞🏻🤞🏻🤞🏻now I’m tempting fate! When I injured my knee at 23 I was worried at the problems ahead when I ‘got old’ so have always been very careful. At 50ish arthritis was diagnosed and I was told I’d probably need a knee replacement at some point. At 62 I decided I was probably old by now. I’d rather wear out than rust and so much new research suggests running is good for arthritic knees.Who knows what the future holds? Replacement knee or marathons? Right now I’m just going for it and having fun!

Haha that's brilliant. You have a great story to tell. I'll be a mere 62 next week too so here's to bouncingtrustyknees x

for one of my lunch time runs and I'm running out of path to pound I had to run down a little side...

Dancing by the end of W6R1

I've been choosing tracks to run to- everything from

doing circuits of it on my runs. Started the programme in the autumn and have run as the leaves...

inner ego, Enid, needed little encouragement when reading that tonight is the Summer Solstice and...

happened twice on run 6 and run 9...both in a headwind!

And on run/walk 8 my chest started to...