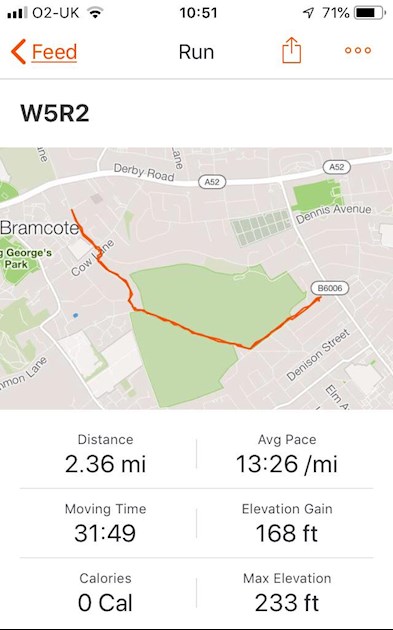 Can’t believe after a month I can now run for 8 minutes!! 😁 A bit daunted about the huge leap to run 3 though, 20 minutes! 😱 I will maybe will have to think of a flatter route. Even a gentle uphill is still a bit of a struggle, love downhill though... 😂

Well done you. All the runs you've done up until now have prepared you for the next run just go slow and make sure you're well hydrated 7 days a week 😊😊

Sonia52Graduate in reply to Buddy34

Yes I am drinking quite a lot of water during the week now which really does help. And definitely slower than when I first started.. 😂 Its more strength with going up hill. Wonder if any other tips.

Buddy34Graduate in reply to Sonia52

Yes, that was what I did this morning. Sat on the toilet with Footpath and mapped out a 3km route with no hills. Still totally knackered at the end though. 😂

Sonia52Graduate in reply to Hidden

Today was about 3.7k. Good thing about the same hilly route is knowing if i can make it to the top of the slope there is a easy run down... 😂 Not really hills on my route, just slight gradients that make it more interesting... But yes when the distance starts gets further i need to plan a better one. Today i had to start later due to the cut through the private golf course is also a school route.

Well done, and don’t be worried! Everything so far has prepared you for where you are now, so you can do it. I must admit I avoid hills like the plague 🙈😳😂

Theres a charity 5k park run 3 October which a runner friend thinks I should do. Good thing it is totally flat 😂

JazzyrunnerGraduate in reply to Sonia52

It is all explained in here healthunlocked.com/couchto5...

You can do this.

True. It will actually be 1 minute less on my next one 😊

your first 8 minute run done 🤣 after that the rest was fine! Not sure about R3 though but I’ll see...

walk to running for two lots of 8 minutes tonight! Weirdly looking forward to the 20 minute run on...

would be able to 'run' eight minutes not once but twice i would have not believed them. straight up.

....I just did it I ran for 8 minutes twice without stopping

2 months ago when I originally started

apprehensive about the next one and running for 20 minutes! It seems such a huge jump from 2 x 8...

What is too fast?