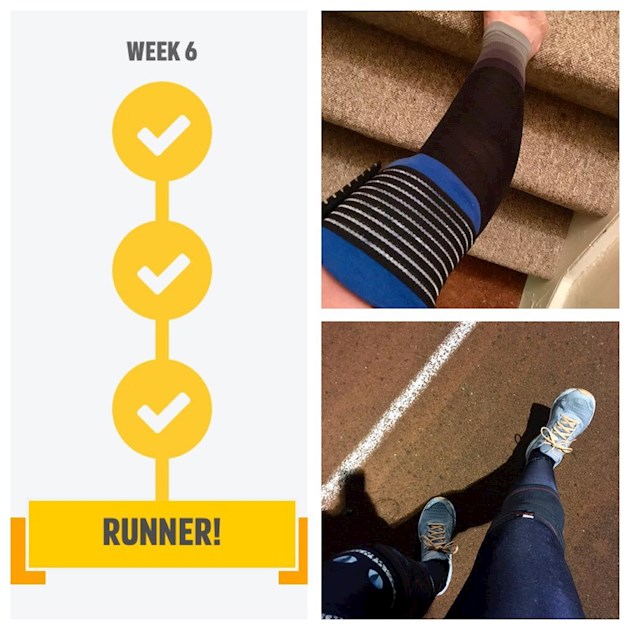 Thanks C25k! I have been a bit down after the high of 5:3. It was such a great feeling to nail 20 minutes and then to struggle so much with the shorter intervals was hard. I try to run slower but it doesn’t feel easier, weirdly. I think the breathing is slightly better but it’s offset by a feeling of not running naturally. I am hoping as the weeks and months pass I will find my pace.

I think I am finally getting to grips with the ‘threshold of uncomfortableness’ that running takes me (everyone?) to. I think I imagined that those runners making it look effortless weren’t feeling much effort... but maybe it’s a combination of not only better fitness but also a greater tolerance for/acceptance of being uncomfortable! 😝

My son was at athletics club tonight so I had an hour to spare with a 400m track (453m in lane 8!). I think I’m going to change my routine so I can run on the track once a week - I really, really enjoyed it tonight and last time I did it. It’s strange as I love the natural and wild outdoors, but there is something very relaxing, almost hypnotic, about a smooth, flat track stretching ahead of you, with no cattle grids/gates/sheep to navigate.

It wasn’t easy, but it wasn’t as hard as the last two runs, either. The toughest moments were again towards the end of that toxic 10. I was expecting Michael to chip in with a ‘you have been running for 10 minutes’ but he waited until the halfway point of 12.5 minutes to say hello. Michael!!!

It’s such a magical feeling when you know you are ok, you are going to make it. I didn’t have enough in my legs for a sprint finish, but it didn’t stop my grin when Michael told me I was runner. 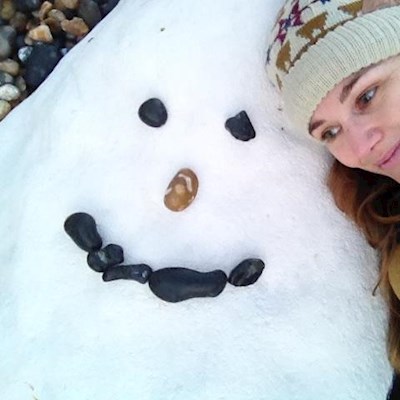 ktsok
To view profiles and participate in discussions please or .
31 Replies
•

Ah so well done you!! I did the W5R3 today when I really shouldn't have done - the running was easy but walking now is hellish - I have been limping ever since and now I will really have to rest it. silly me - I was trying to catch you up!! so pleased you are doing so well

Argh! Mafee! I’m here cheering you on, will stick with this forum until my buddies have crossed the finishing line! I’m not running until Friday now and think I’m going to slow it down, do 3 a week rather than every other day if that helps?!

Amazing that your running felt easy and it’s the walking that’s troublesome. Have you been stretching before and after? The photo top right is my post-run compression sock and ice pack on the knee. That’s after a hot salt bath... tomorrow I will use a roller and ball to get into the tight areas. It sounds labour intensive but it’s rather nice, looking after yourself! Make sure you do the same. We don’t want to find ourselves on the IC 😬

3 a week would at least give me a fighting chance of keeping up. I am going to do nothing tomorrow - adult ballet on Thursday and then see how it is on friday - but if I need to rest it, I will

There isn’t any keeping up needed, my lovely. We are all swimming in the same direction and I don’t see a finishing line. I kind of realised today/yesterday that the graduation is less important to me than it was. I just want to keep running 🙃

Well done! Hopefully I will be joining you in the next few days but first I need to do R2.

Thanks strollguy. It was great, you are going to love it 🙃🤪

You ARE a runner! And 4K is amazing - I've just done my 9th post-grad consolidation run and in 30 minutes hit 4K for the first time, so you are going great guns! Well done and looking forward to hearing how you cruise to graduation!

Thanks Amerynthe. You have done so well. Just to keep going, at any pace, is such an achievement. We ARE runners! I am just starting to believe that might be true. It’s a great feeling 😊

ktsok in reply to Fabulous450

Thanks Fabulous, it really is amazing. I was so full of doubts after 6:1 and 6:2, although managed to approach today’s run in a calm, neutral headspace. It’s been such a yo-yo journey so far (note to self - remember that the next time it isn’t so great!).

I just saw your post - congratulations on your 11k! It’s so good to read about the achievements of those who have kept on running beyond graduation, thank you 🙏

Thank you so much! And just so you know, W6 was my most challenging too! 🥴 I knew exactly what you were saying, as I have been there! Its in the bag and youre a runner!😁😁 This is the home stretch now!😉 So happy for you !🤩❤️

ktsok in reply to Fabulous450

Thank you Fabulous! Look at us go. Yippeeeee! 🤩

Wow... I love 'll these stories of what to me, at the moment, are impossible distances and speeds. I love it because I'm heading in that direction, however slowly. You are an inspiration!

ktsok in reply to Pianism

Aw thanks Pianism. It’s crazy how much difference a few weeks can make. I remember looking at week 5/6/7ers like I was in first year and they were sixth formers 🤣 I also remember how difficult 60 seconds was... just 6 weeks ago. It’s alchemy. Enjoy the journey 🙂

That's EXACTLY how I feel - a first year amongst 6th formers. Lol!

Great job runner. A track is great, I’d run on one weekly if I had access to one, and post plan if/when you start to run by distance you have a good idea how long is left without looking at watches or phones. When I do run on a track I count laps as though I was in lane one... it’s nice when it ends early 😂

Thanks UNM, fellow runner! 😀 Yes, it feels a real privilege having access to a track in a stadium like this. Counting laps is quite relaxing, isn’t it?! I was doing bad maths in my head for a part of the run, multiplying 450, guessing where the km fell on the track... found myself at one point thinking, ok, just do one more lap - that’s nearly 1/2 km, which is a big leap from thinking, ok, just run to that tree/cattle grid 30 metres away! Thanks for all your support, it means a lot, I wouldn’t have got this far without it. 😘

Well done you! Proud of you

Thanks Ethelbert. It was a good ‘un. You will enjoy it, I’m sure

I actually did. Almost. Thanks for the encouragement, it contributed towards getting my mindset right

Still smiling here... 😊 have a feeling it will last until about 5 minutes into week 7 run 1 🤣

Congratulations ktsok on your new status!

I can relate to everything you say about how week 6 feels. I'm resting well to prepare myself for the third run in week 6. Trying to get my head sorted before I attempt it.....

Thanks nazz. It feels great. Well done for resting body and mind - I really had slumped after 5:2 and it sounds like you have a bit too. Only one (great) person responded to my post after 6:2 - I don’t think I communicated my struggle very well - and I truly felt like giving up. Silly really. E27 gave me a lift and I pulled myself together. Went into this one with a kind of neutral ‘what will be, will be’ headspace. No pressure or angst, and let go the expectations. Well, what happened? Without intending to I set PB’s for 3 out of 4 of the kms (it did help I was on a track!) and feel like I have finally seen the light! It’s such a head game, this running malarkey. Best of luck/legs with 6:3 - it’s a good one 😊

Well done you. So proud of you (even though you were naughty and sneaked this one in early...... rest now!) I’m actually really looking forward to doing this one later today, although I’m pretty sure I won’t be doing 4k!

Shhhhhh!!! It just... happened. I wasn’t sure until I got there that I was going to do it and felt very neutral about it and prepared to bail out. But it was really... good?! As yours will be, I am sure. I’ll look out for your post

I don’t blame you at all given that you had the track just there, asking you to run on it. I would have done the same. I’m just leaving work now so hope to get out about 3 ish

I will be driving on the school run, will be thinking of you and willing you on! Go E!

So I was very close to not going running today; I had a horrific day at work and ended up in the...

am an official runner. I even increased the running speed during the last 5 minutes !

W6R3 done - I am officially a runner!

manage to keep my feet going in running stylee for the whole 25 minutes. Having the congratulations...

I am officially a runner :)

25mn block running and I was jumping of joy when Laura said I am now a real runner!

Finished week 6! Apparently I am a Runner now 😀

managed to fit my runs in and just finished the final run of week 6 today. 25 minutes! Wow! Was...