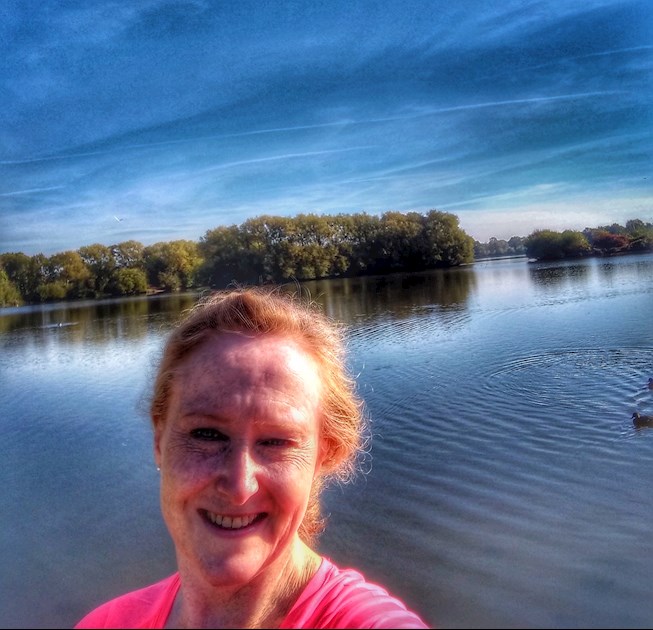 First Park Run and second 5k wasn't sure if I would enjoy this running with people lark, I might run with the crowd and tire early, be disheartened being last or just too many people about.

Well I wasn't last and Strava says I kept to a steady 7.30-7.37 pace with a wickedly fast 5.26 for the last km. The cheers from the markers definitely helped as did the 400 then 200m signs at the end (didn't have an audio cue for km done which I think worked).

I had a big smile all the way around, beautiful venue and the sun shone.

I guess I'm a lone wolf who likes to socialise occasionally and I will be back now I know how it works!! 😊👍🏃‍♀️🏃‍♀️Happy weekend folks xx

I have always run alone too and also did my first park run today and loved it. Will definitely be back for more

Congratulations on your first Park Run! Yup, i was pleasantly surprised 😊😊😊

GingernutterGraduate in reply to Karen376

Thanks karen376 congrats on your 3rd PR! once I started C25K a Park Run became my goal and now I've achieved that.. gobsmacked 😂😂

Well done and welcome to parkrun... I’m the same in that I prefer running alone, but I’m looking forward to swapping my high viz for a running top at parkrun soon! Great last kilometre there, that’s quick.

Thank you unfitnomore, I think it will be good to pop along now and then but it's the same course every week and I know how fickle I am, so I won't be there every week 😊🏃‍♀️🏃‍♀️

Excellent, I have one a bit further a field which I will give a go too 😊

If you like variety your local parkrun’s web page will tell you if there are other parkruns within 20 miles. I like the familiarity of my local one (though it does have a lot going for it) but I do plan to do some parkrun tourism in due course.

Ahh..is that what tourists are? People who run at events other than their closest? 🤔 Cheers

Yep. Parkrun tourism is a thing. It has websites and Facebook pages and everything. There’s a set of videos on YouTube by two guys trying to do every parkrun in Scotland in 2018 - complicated by the fact that the number has risen from 33 to 42 since the start of the year! Then there are alphabet tourists who collect a parkrun for each letter of the alphabet (though there are only 24 letters available in the UK). Me, no plans to get in to all that but I do want to try some different ones - maybe not in winter though.

Wow!! Park Run..its a whole new world!! It's as great concept..by the people, for the people 😊😊

A HOUND ON HOUND TOR

I ventured out onto Hound Tor on Dartmoor late last week for a bit of a jaunt with me dog after...

without transport and public transport that doesn't run much.

Hounded on our run

dog and me and we grabbed the last parking space.

It was a cracking run with the moor looking...

glad to be walking rather than running in the heat! We sometimes have people at our course who walk...

I really want to do this!