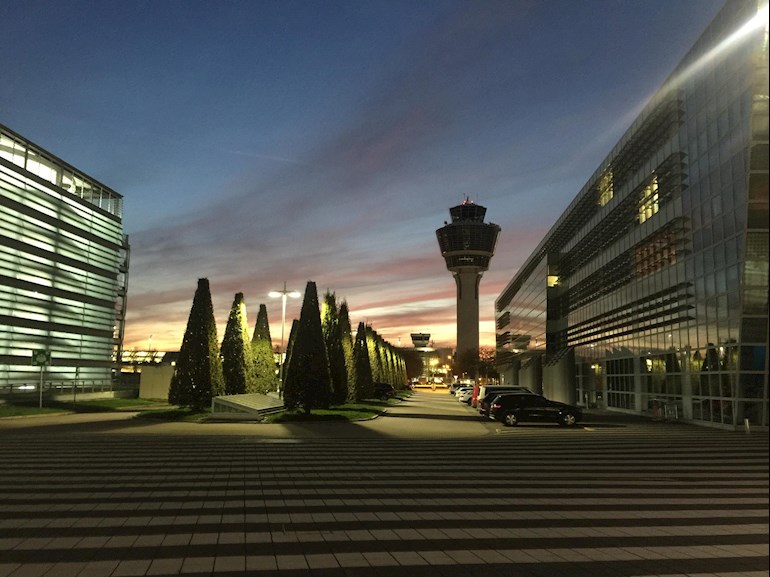 Early flight to Munich and then an hours drive to a meeting.

3 hour meeting and then back to the airport and into the hotel ready for a stupid o’clock wake up to drive 3 hours into Austria for tomorrow’s death by PowerPoint meeting.

The difference is, rather than straight into the hotel bar I was straight upstairs and changed and out so that I could get my 5km in on my ‘run day’.

Other usual traveling stuff is now left out of the case to make way. for the Ghosts, the leggings and shorts and the Dayglo Go Faster minion jacket.

Thing is, I’m used to running out in the countryside and woods and airports don’t have a great deal of running areas.

So I set off determined to find one.

And I did. And there was not much traffic which was a surprise.

Plodded along and got into my rhythmic Minion Express mode huffing and puffing along.

Wasn’t out for speed on this one. Just a comfy 5km. Ran around all over the place taking in the sights of the airport.

It was only after a short while that I realised that there really was not a lot of traffic except ones with flashing orange lights on the roof and all of the other people were also wearing hi viz yellow but we’re not runners.

Thankfully Endomondo told me I had done 3km so time to head back sharpish to the hotel.

Some chap pulled up alongside me in one of those little carts and started jabbering on and doing some form of YMCA dance as his arms were everywhere.

A quick “Sorry....sprachen Sie English?” mixed with a shrug of the shoulders and I found he spoke very good English.

Most of them four letter words but he pointed me back in the direction of the hotel.

Shower and a beer I think and wait for the police to aid my room at 3am.

Yikes, hope there's no fall-out! Well done for getting a run in though, true commitment!

Kudos to you. Another good run from a committed runner. Or should that be a runner who should be committed? 😂

Probably the latter in all fairness

You know that long stretch of paved road, seems to go for miles? Well, actually it’s a runway, not a running track and that noise overhead wasn’t a strange kind of indigenous bird - well, you get the drift!

So it was you that delayed my flight back from Berlin yesterday evening!

Seriously, looks like an interesting place to run and well done for getting out there. The weather was good anyway!

Weather was great. Didn’t quite make it to the big wife running track.

They’ve let me through airport security today so obviously ok.

Onwards to Zurich to see what mayhem I cause there.

Hope they didn't wake you during the raid 😂

impending rain) and set off on my run.

Of course you can never rely on the English weather and...

Mad dogs and English(wo)men go running in the midday sun!!!

work at 12 today I got changed at work and went straight out. It was so hot, even in the shade!...

about donig a run in this heat. So I had penty to drink before setting out and decided to run...

I wish i could get back out running :(

and today I had meetings then a flight down to London.