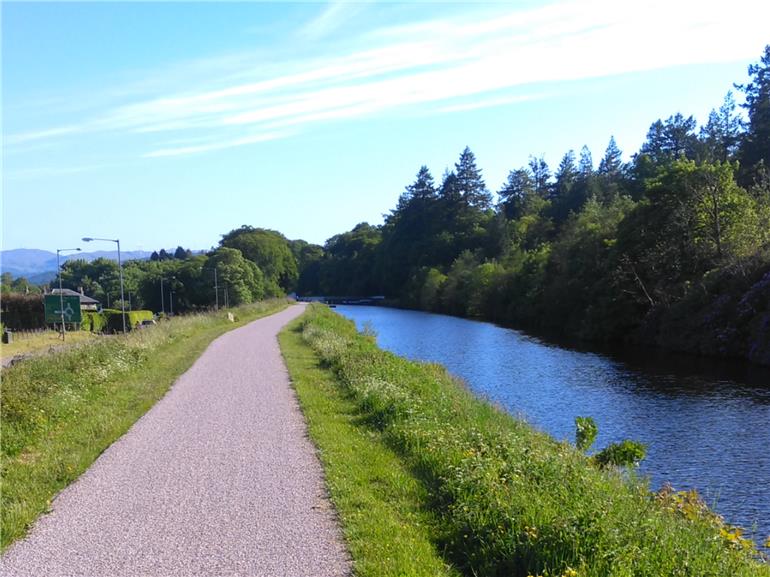 Well that's week 1 done on Friday did W2r1 tonight. I'm a bit worried about myself, woke up Friday morning thinking, yes run 3 to finish week 1 tonight and was actually looking forward to it a bit 😱😱 was in Glasgow yesterday and got my gait done so right shoes too, well they're ordered didn't have my size ( one size larger than normal) only a couple of hours sleep last night and 23 degrees here at 6 o'clock tonight so wasn't sure whether to give it a go but decided stick to the program so did w2r1. It was not too bad until about 15 seconds before stopping on the last run but just kept going praying for Laura to say stop running so far I've managed all the "run" sections on the podcast 😄 So that's me on to w2r2 on Tuesday. Maybe give the bike a miss tomorrow night. This is where I have the pleasure of doing this along The Crinan Canal in Argyll which is 90 seconds walk from my front door 😄😄

Lochie68 in reply to Sammully

That looks lovely. Well done for completing your run x

That looks so lovely Lochie

Yes, I agree about the salt and sweat in your eyes, it stings like a divvil doesn't it ? I wore my baseball cap today thinking it might help stop it, it did, but then you could've fried an egg on my head . Ha ha

Beautiful scenery- hang on - bad pun coming up- it's a Bute! (sorry..)

Great to see that you've already got the bug- looking forward to the next run, gait analysis. Fair play to you

We need to see a picture of your shoes, when you get them. It's the law.

Lochie68 in reply to 90ldfinch

90ldfinch bad pun appreciated at this end almost everyone else will be shaking their heads wondering what it is.

😂😂😂😂 re gait analysis, up untill last week I had NO idea what that was, had never heard of it but I asked for advice on here about shoes and was advised a couple of times to get it done so went into a specialised running shop and told them I needed advice. First thing the guy said was can you take your socks and shoes off and jump onto the treadmill and run as you'd normally do. I said you're not going to see much if I'm standing still I don't run really 😂anyway he spent a fair bit of time sorting me out. My gait is neutral cushioned, still not really sure what it is but ordereda nice pair of Asics Cumulus (I think)

Well it sounds like you'll be spending a fair amount of time running in the future, so it's great that you've ordered some shoes that make it as comfortable as possible.

Oh wow! beautiful, beautiful!!!! Lovley run, but I know what you mean when you talk about the sweat in your eyes..ouchie!!!

Zev1963 hilarious😂 the sort of thing I'd do and may possibly still do.

Yeah it is lovely. You don't appreciate it as much when you see it every day

Zev1963Graduate in reply to Lochie68

You are so right about not appreciating the things on our doorstep. I think maybe when you take up running you appreciate your surroundings that bit more though

I grew up in a village in northamptonshire which had a dead open cast iron quarry and a country park both within 10mins walk. I never really appreciated them as much as I should have, as I gew up with them there. But they were great for playing as a child

I lived in Rugby between 1998 and 2004. Draycote Water is just on the doorstep. I didnt take full advantage of that until I took up running. Now I run around it every time I visit

When I lived near Chantilly north of Paris, I did cycle around the forests there a lot, as I'd got into cycling. It would be great for running too, but I havnt tried there yet. Something for the future

I've lived near Blois on the north bank of the Loire since march 2008. I really appreciate being able to run along the levee. It's only 10mins walk from my front door

Running does really help you to appreciate your environment

Well done. That looks like a brilliant place to be running, and such a lovely day.

Looks a really lovely place to live and run. I am right behind you starting wk2 tomorrow thanks for testing it out for me

Lochie68 in reply to Hidden

Hidden no problem let me know how you find it 👍

being able to run each of the runs however extremely slowly. The problem is after my second run I...

Started W2R1 with an outdoor run (NEVER thought I'd run in public!) which was wonderful. Then W2R2...

Happy to have managed this one - trying not to look too far ahead at what is required in the coming...

Completed week 1 and about to start week 2 - feeling nervous!

joing my daughter on a 2.5k fun run only to realise how hard running has become for me. I do try to...

completed the second run of week 4 tonight. It was brutal, but not as bad as the first run of week...

Why can't I just stick with it

This is May’s consolidation club with me MummyCav...