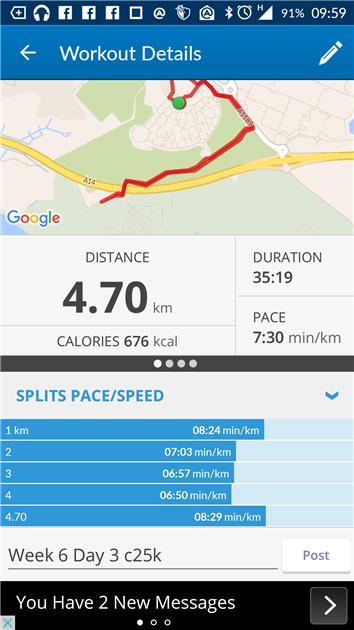 Just got back from my 25 minute run on a new route, I didn't want any reminder markers letting me know how far I had to go.

I'm not going to lie, that was tough and several times I thought of stopping, thankfully Laura didn't pipe up until I had reached half way 12.5mins, I think if she'd notified me at 10 minutes I may have stopped and repeated day 2, then I thought omg Laura when have I got 5 minutes left? Surely any second you are going to tell me...... "well done 60 seconds left" what? Oh thank you thank you.... I didn't have much left in the tank. That was all cardiovascular, the legs were fine. And check out the split times, I actually got faster. 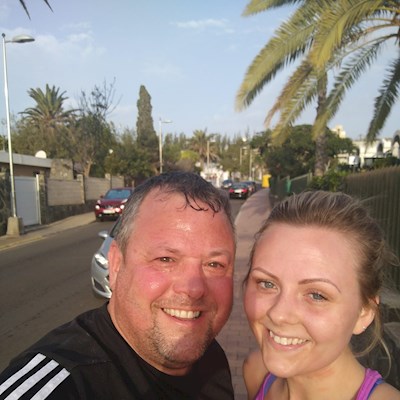 Paul46-ipswich
Graduate
To view profiles and participate in discussions please or .
8 Replies
•

Well done Paul, I need to cut down on my vape stick to get more air in too. Keep it up.

Mitch, my son is a serious Vaper, I'd rather he did that than smoke so can't complain but I do wonder what's going on in his lungs at times, sometimes our house is like an opium den and you can't see more than 10ft. He's is on week 5 and I've heard him say to his mum he thinks he may have asthma, well he hasn't as I've lots of friends who have. I'm sure it's the Vape, I'd be interested in your opinion.

I hope your running is going well.

I'll butt in. I stopped smoking 2 years ago come April, and have been vaping ever since. Previously smoked for about 30 years (crikey that makes me feel old).

Not really enough evidence yet on vaping I suppose, but they reckon it's 95% better than smoking.

The typical main components in vaping liquids are

Nicotine - on it's own not generally harmful. hence nicorette etc products.

PG (Propylene glycol) - used in asthma inhalers since 1950's and other atomizing medicines. Usually around 80% of a typical vape liquid.

Edit. Oh, and well done on your runs !

The end of week 6 is a brilliant feeling. The last 3 weeks are just more of the same and you know you can do it now. I like your idea of running a new route to prevent those mind games beating you.

If you got faster, that means you could do MORE. Ha ha bet you don't fancy it right now though.

You're kidding right? Believe me even a nude Cheryl Cole beckoning me on couldn't have made me do another minute lol

Hen pen that's panic for ya! I just wanted to get to the end!

excuses, although it was very warm! Got there and got started. Laura started by saying that if i...

Well, everyone warned me that week 6 might be tough after the elation of the 20min run in week 5 -...

different route for Day 3 and kept running until Sanjeev whispered delicately into my ears to stop...

getting into any kind of rhythm in runs 2 and 3, Laura cut in and slowed me down... I'm looking...