My first running bling! : A friend encouraged... - Bridge to 10K 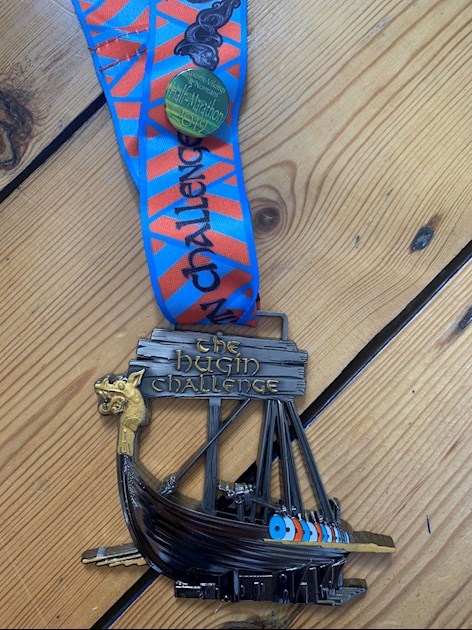 A friend encouraged me to try an evening run with her. I have to say, it was a brilliant event. It was a 5K track which was open for six hours from late afternoon into the night. This meant that anybody from 5K runners to ultra marathon runners could participate. As somebody who has only ever run on my own around my local area with my earphones in, this was a bit of a leap! I was incredibly nervous especially as I saw the elite runners arriving but with the support of my friend I gave it my best shot. I was aiming to do a 10 K run which I did… But I also jog/strolled another 10 K to complete half marathon distance 😀

The experience has really given me confidence. I would also wholeheartedly recommend this style of running event as it gives you options around times and distances. I’m certain I would not have put myself forward for a half marathon distance ordinarily. To anybody out there who ever doubts themselves or thinks that running is not for them… Have faith in yourself and go for it!

JoOnTheRun
Graduate10
To view profiles and participate in discussions please or .
14 Replies
•

JoOnTheRunGraduate10 in reply to backintime3 years ago

Wow! Great achievement - what an amazing thing to do on your first event! Well done!👍🙂🏅

JoOnTheRunGraduate10 in reply to Sandraj393 years ago

Thank you! I surprised myself! My thighs and toes are feeling less perky but I’m on cloud 9! 😀

Amazing! Well done you. Such a positive post too. And that medal is gorgeous!!

Thank you for your kind words. I wasn’t expecting to receive a medal at all so I was really thrilled! 😀

It is a nice one

Wow...well done you doing 10k then another 10! Great stuff and medal well earned.

JoOnTheRunGraduate10 in reply to Franglaise3 years ago

Thank you for your kind words. I completely amazed myself too! As there were no time pressures (6 hours to do as many laps as you like), we felt good after our 10k so we just kept going! We didn’t run the whole thing though. We were spurred on by our head torches 😂My friend had bought the torches but we’d completed the 10k before they were needed so we wanted to keep going so we could get a bit of use out of those and had a bit of a giggle in the process!

Sounds like you both had a great time....what a fantastic idea having no pressure to complete your own distance.

Wow. Well done. 🎉👏🏼🎉 Congratulations and what a great medal. I didn’t know about this style of event and will really look out for one. The flexibility on the day sounds wonderful and might even get me to have a go! 😄

Thank you for your kind words. I’d never heard of this type of event either until my fiend told me. Here is the link to the group that organised it... they have some fun events too 😀

Thank you and Congratulations J. :):)

Thanks for your kind words 😀

My first ever bling has arrived!!!

in the post!!! Woohoo! My first ever medal!!!🎖 Not for running, though. Rather for indoor rowing

I just ran round the garden for my first bling!

dreading it! My first real ‘race’. I’m generally a runner who likes to keep hidden off the beaten...

Need IT genius for (hopefully) the next "Virtual" ultra-rela...