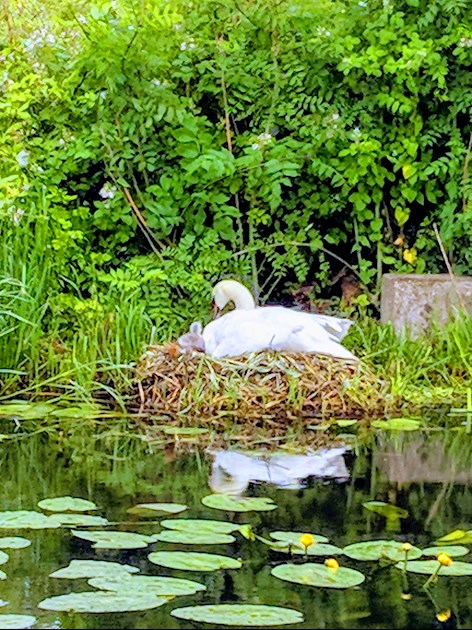 So the last two weeks has seen me trying to maintain my running alongside other commitments a dodgy knee and this week Hector!

Both weeks were 2 run weeks which is not what I want and I need to work harder at fitting them in. After the “bit of a knee niggle” I have been slowing up to keep things nice and safe and make sure I don’t cause myself more problems.

On Tuesday this week I had a nice gentle run going out on an almost familiar route. Outbound was along the canal towpath I have used a few times but on the way back I decided to try a different twist. It was lovely, running through a field, no wheat just horses. As I passed them they hardly took any notice of me. Probably familiar with runners taking such detours through their patch!

Then over a style onto a narrow path beside a B road. The path was greeted either side by brambles and nettles so it was a tricky job to maneuver my way through them until the path widened out.

After about 10 mins I filtered back onto the canal towpath again and headed for home.

Come Thursday morning the alarm woke me at 6 and I was greeted by “you’re not seriously going out in that are you?” - taking a peek outside at Hector blowing its way down the street I decided “No I am not” and snuggled down for another hour of shut eye before hoiking myself into the day for real.

This then left me with a dilemma - I really wanted to do my 3 runs this week but if I ran Friday then that would mean a run on Sunday (aka Father’s day) and I did not know what the family had in store for the day. So the decision was made . A 2 run week!!

Come the Saturday morning run I set out a bit later than anticipated and headed off on a bit of a detour start before getting to the canal. A 2K lead before getting there allowed me to realise that the niggly knee was feeling safe strapped up in knee supports as it was. So off I went in pursuit of happiness with a mental marker of the distance I had reached before joining the canal. My plan was hatched, I wanted, if my knee would let me, to push my distance up a bit to test myself and how my legs responded. If I set out and get to 8k then that would be a turn around with 6k back making 14k in total - I knew my maths would help me one day!!

The main problem with this plan was that if my knee started to misbehave it was a long walk back and I did not have any money or bus pass on me! Hey ho … the best laid plans …!!

Fortunately I am pleased to report that I did not have to trudge slowly back and was able to complete the route with knee performing admirably with its support giving a great performance too.

The route out started well but the rain clouds opened just before my turn around marker and I sought shelter under a tree for a couple of minutes to take a drink and don a waterproof. Suitably quenched and protected slightly more from the elements I set off again this time in the direction of home.

The last time I did this route I tried to kick up my speed and that's when the knee complained, this time no chances! I stopped en route back again as I spotted a swan with its signet in its nest. So took a quick pic and continued on.

Finally hitting 12k I knew that I could keep going - I stopped at 14k as that was my outbound target but for once I felt like I could keep running. My legs were in fact glad that I didn't.

Finally back home after about 2.5hrs out of the house (yes I really am that fast 😉) I could feel my calves moaning so gave them a good talking to and a good going over with a massage thing that I found. Hopefully no cramp wailing in the middle of the night!!

Happy running everyone, I know mine was.

Can’t keep a good man down.

When the going gets tough the tough get going.

For me, well I will have to see.

Hope your knee sorts itself out.

PS. Read your post before going out this morning, must say it gave me the stuff required to grind it out today.

Happy to help although remember to be careful out there! My calf muscles are still yelling at me! I think a couple of weeks reigning it back a bit are required for me.

Tbae in reply to Richard7

Interesting when JuJu advised , think about reduced weekly mileage, on a monthly basis.

Of course we all know the elites have that and indeed many weeks of complete breaks.

Yes it did help, thanks,and yes cautious approach only way to go.

Not going to end it before it starts.

What a beautiful run, Richard! And so pleased your knee held up fine, you must be very relieved. 😁👍 Have a good rest and happy Father’s Day! x

Thanks Sadie .. just been given a great Father's day gift by one of my daughter's "Running up that hill" by Vassos Alexander. Only worry is its talking about Ultras!! Looks like a good read

slushy leafy path so decided to walk through this path. But I think 5 k is on the cards next week....

Any distance flat out, sprinting, that is balls out.🤔.This is 10.

way up before needing to walk. My plan is to try and run further up each hill every time I run the...

running for a time, then turning and running back. The run back is better than the run out. I just...

Fear, excitement or a bit of both?

night before the longer runs, I don’t know if it’s a bit of fear or excitement. The run went really...