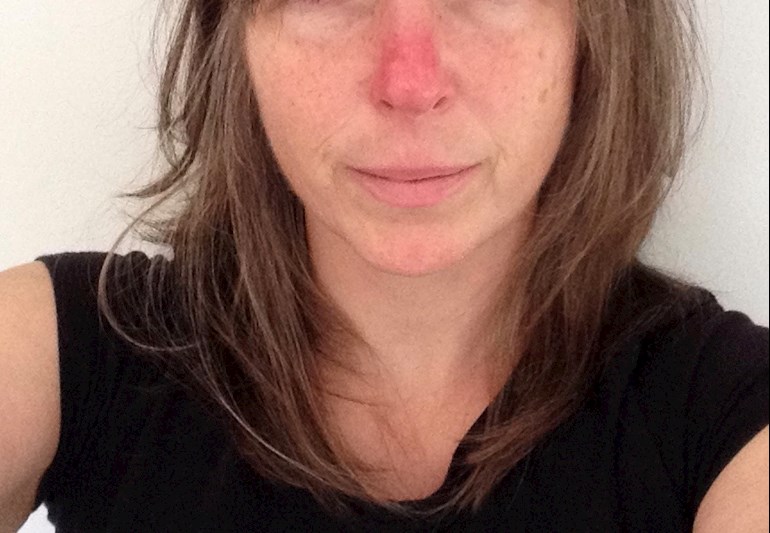 This keeps happening and I'm wondering if anyone else experiences it? It feels like a cross between buzzing and that sensation just before you sneeze. It is now going on for hours and hours at a time. I can cover with make-up, but not long after, I just glow right on through. I can't put my finger on the trigger because it happens anywhere anytime. In fact, it's happening right now while in bed... Panda x

Yes I get this often! As you know I have Sjögren’s rather than Lupus. Red nose and buzzy is often me. X

panda2 in reply to Hidden

Thanks for your input. Knowing you've been going through so much with your nerves and that you have vasculitis makes me think it could be caused by one of those categories then. The Mycophenolate, which is helping already at 6 weeks with some areas, does not seem to be touching this reaction, particularly as it's getting worse. Did you find a difference with your red nose/buzzing reactions while on Myco? x

Hi, while I am not an expert, it seems to be rosacea (I have the same problem). Have you checked this with your GP? It tends to flare up especially when it is sunny. If it is rosacea, then it can be treated with creams, sun cream and some omega 3 oil. Good luck.

panda2 in reply to Popoff

Thanks for that Popoff. I have such a huge list every time I go to my GP that this red buzzing nose thing always gets left out. I had understood Rosacea to include the papules, but after looking it up again, I see it can be different at different stages. Plus, I certainly note red blotchy flushing including my chin when I eat spicy food -- which I LOVE -- that lasts for an hour or so (so I eat it anyway). And I've been having an extreme pink/red stripe face reaction, including forehead and chin, after going into the sea (and also the swimming pool and also a hot bath), where there is obvious temperature change. My confusion is that it happened so suddenly last summer. I never had this issue before and I am a very common visitor to the sea, perhaps 2-3 times per week. Suddenly I was dealing with this weird facial change, which on 2 occasions triggered 8 hour excruciating burning nerve issues. Once I had to call 111 because I thought I was going to spontaneously combust. I've managed it over this past year by limiting the time in the sea and going on cloudy days. And oddly, I noted the pink stripe didn't happen the last time I was in the sea a week ago. So, I was thinking perhaps the Mycophenolate was starting to work. But if this is actually rosacea, I'm assuming immunosuppressants shouldn't make a difference?

I think you might be right that there is rosacea here. I'm wondering that it might also be overlapping with the ctd, which could be what is triggering the nerves. God, this is all so complicated! Thanks for your comments! x

panda2 in reply to panda2

I showed my Rheumatologist pictures of this Rudolf nose. She tried not to chuckle. Said it was all part of the bigger autoimmune picture. Didn't think Rosacea.

Hi! Did you ever get any answers from this? I'm having the same exact problem.

Wish I could say I did. I guess some things they don't really know answers to and when they are not life-changing or painful things on our great list of symptoms, they stay unknown sadly. What I can say is that it has not seemed to progress, so I can put up with it. Thankfully it's not all the time. Px

Has anyone experience this ?

My rash has progressively gotten worse and a new development seems to...

I've just come back from beach holiday and while I was there staying in the shade on our deck,...

Anyone experience extremely cold sensations when laying down?

down my arms . It doesn’t hurt just feels so cold and only happens when I lay down. I’ve learnt...

Hi all, I have a very strange sensation. A cold feeling down the right side of my head, almost like...

Reasons to be cheerful 🙂

The difference between my local rheumy and the centre of exc...