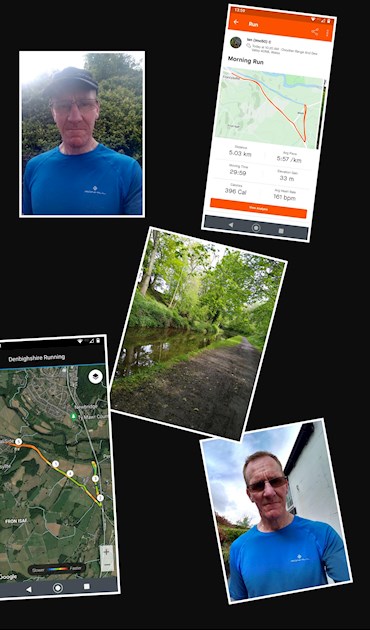 Twas warm out there this morning 🥵,

Minimal faffing today, quite literally I was out and running, just an hour after waking.

Breakfasted, stretched and hydrated ( more so as it's looking warm outside)

I wanted to run this morning, firstly because I needed to and I'd been toying with the old klms or miles, so after a Garmin twiddle out of curiosity I was plumbed into miles let's see......

My normal pre-run gaff time is about 2 hours, so running an hour after leaving the land and duvet was errr well, the legs felt clunky 🤨.

I knew the pacing I was aiming for a steady 9.30 per mile, easy enough!!! BUT I definitely don't like it, across the last 24 months or so I'm intune with klms this mileage lark is odd, I know it's a split audience but I'm switching back asap...

The running with the exception of a very busy towpath and walkers who definitely weren't for making space, was just the wake up tonic I needed, energized and ready for nightshift number 7....

Enjoy those Sunday runs you lot, be you graduates, current couch participants on your various weeks.

Our towpath is also a cycle path...cyclists are the *worst* ...bikes don’t seem to have bells any more 🤷🏻‍♀️

We were meant to have rain today here, so I went out at 9am in a mere drizzle, which stopped!

When I was just walking, I had Map My Walk set to miles...but embraced the metric once started C25k!

Cheers LottieMW the cyclists are pretty good I find, and most will call out, or sound their cycles bell, but walkers especially the touristy ones ( aqueduct visitors definitely) will not share the towpath 🧐 I'll always try to make my own space

LottieMWGraduate in reply to Imc50

Mostly regular walkers here...both with and without dogs. They usually step to one side for me...😊

Don't blame all the cyclists LottieMW, I have been cycling for what seems forever, I always ring my bike bell for walkers or runners, now that I also run I lookout for any cyclists behind me.

Over the weekend I have done all three disciplines, yesterday morning I RAN 🏃‍♂️5K, this morning I WALKED 🚶‍♀️ 8k and early this afternoon I had a short BIKE 🚴ride and yes I rang my bike bell to warn several walkers that I was going to pass, all the runners I saw this afternoon were running in the opposite direction.

You are a very considerate cyclist...if only all could be like you 🚴🏻‍♂️🚴🏻‍♀️

It's a tricky line the bell thing. I hate using my bell... it smacks of "get out of my way" when that's not what I'm trying to say so will try for a cheery "morning!" or "afternoon!" first. Sadly some "walkers" will not respond to anything, in fact have been known to make efforts to block trails even worse. Some runners using music can be oblivious to all forms of communication too. 🤷‍♀️

As a runner I often get accused of "sneaking up" on walkers and told I should have a bell... 🙄 I sometimes sing out loud to alert them to my presence or click my fingers like a pacing metronome as I approach, but again, many are lost in conversation and completely in their own bubble...

Yea... but NO! 🤣🤣🤣 I get annoyed enough if I can hear something moving in my pack... that would drive me insane!!!

Nooooo!!!!!😱That would drive me totally nuts🤪

I had a squeaky trainer once on a run through the woods. I thought it was an angry squirrel 🐿️ following me until I realized what it was! 😂

I tend to scuff my feet coming up behind walkers...

I do that too, or make a point of rustling my arms in my jacket. Usually for nothing as they pay zero attention.

The best way I find is to simply join in their conversations! 🤣

The problem with many psyclepaths is that their bells no longer sound like bicycle bells. Some are electronic and sound just like an alert notification on your phone. Some just do the tiniest "ting" and assume you've realised what it is and how far off it is. A "brrring" would be much more obvious.

It was warm wasn’t it! Well done Imc50 . Bless you with the night shifts! 😞

Warm was definitely the word Sarah 🥵, the breeze was barely a whisper it was so still.How's that revisiting the couch progressing easier second time around?

Indielass00Graduate in reply to Imc50

I wanted to jump in the sea this morning after my run! 😂It’s going well thanks. Loads easier thanks Ian. Started Week 4 this morning and saw Osteopath yesterday and she’s really pleased with all I’ve been doing 😇

Ohhhhhh a sea to jump in 👍, my canal isn't that inviting 🐸🤣

Good stuff, and welcome back to Team KMs 😊♥️

Oh definitely Abi, not the greatest idea by yours truly 🙄, everything felt totally out of sync

Love the way you do your photos. Really nice memory file of each run 👍

tmbtrainGraduate in reply to Imc50

Thanks for the link. I've download and will have a look at it later. Cheers!

I'm toying between kms and miles too, interesting to hear it's a 'thing'! Will have a look around on the communities here for what people think... currently using kms but not sure I like it 😏

Oh it's definitely a "thing" D25K I guess it's an individual thing, there's definitely more klms In a marathon than miles, but those klms they roll by quicker 🤓

But the miles make more sense! 👍🏻🤣 I cannot cope with kms... which my hubby laughs at, as he points out, my truck is in kms...🙄

It's so weird, I never do that (and get very annoyed if someone else does!) It's just a completely different thing, but miles on foot makes so much more sense. I was delighted looking at my satnav that over Xmas I ran the same distance as it takes to get from Chichester to one of my usual RDCs in Sittingbourne.... 🤣🤣🤣 so maybe I should measure in RDCs 🤣

Well done Imc50 don’t know how you manage it being on nights omg night 7 I struggle with 3 night shifts!! Happy Running 🏃‍♂️💪🏅🏃‍♂️💪⭐️

Ahh but I guess my nights are probably perhaps easier than nursing nightshifts Rebecca ? I'm just sitting down pressing pedals and spinning the steering wheel thingy 😋.........

May even summon up enuff energy for a run 🤞

9weeks2RunGraduate in reply to Imc50

Night 8 🙃🙃🙃 madness!! Hope your shift goes well and you enjoy your run 🏃‍♂️

Thanks Rebecca 🤓 so far so good

Imc50Moderator in reply to Frenc

Wake up Beast from the East within you!

muscles started to get warm, I broke the sweat. I knew I am ready for a longer run, but as a snart...

'Determination is the wake up call to the human will' Anthony Robbins.

thankful that I can run.

Then, before lunch I've enjoyed one and a half hours gardening,...

'bad' run. I thought I had covered 3.30 miles but I'd misread my watch and, having checked my run...

Running Up That Hill - No Problem

Ventured out for a Stamina run last night having had a few days off, and to run a route that I used...