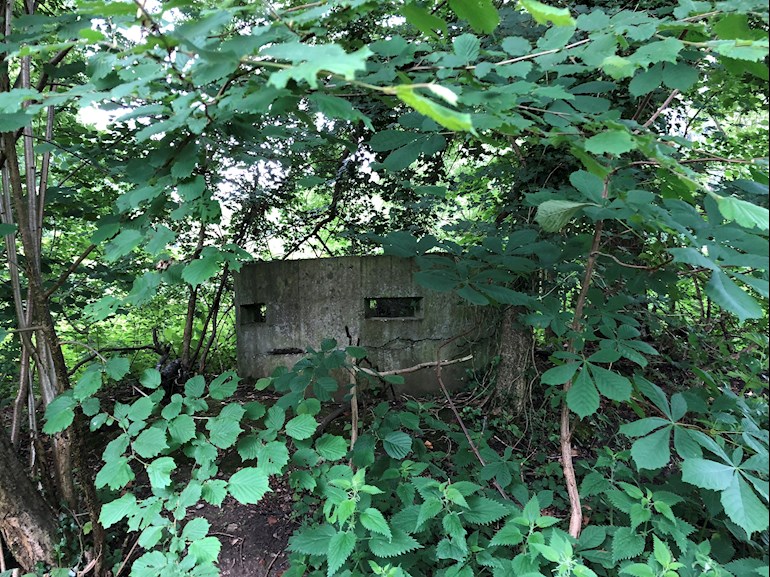 W9R2 falls on a Saturday, and I was out with the girls last night, so I leave a LOT later than my usual weekday 6.30am. Luckily we are all Larry lightweights at the moment, since we’re recovering from various illnesses, so at least I’m not hung over, plus everyone wanted to get home in time for The Bridge (do we know how to party, or what?).

I don’t know what the attraction is with the Brutal Hill. It seems to have a strange allure for me. When I don’t have another route in mind, my feet end up pointing in that direction, despite the inevitable pain and suffering. Perhaps I am a masochist. (Pause to look up the gradient: average of 5%, with sections of 12.5%. I am *definitely* a masochist.)

I don’t mess about this morning, but head straight for the Brutal Hill. Running up it is still hideous, but at least the nauseous adrenaline backwash seems to kick in later each time I do it. I go over the top and immediately downhill again, which always seems unfair, since I’ll have to go back up again. For the first time, I leave the paved road and take the muddy woodland paths. I often walk this way, but have never run it before. It’s nice, running in the woods - calming and quiet. Much better than the street. I meet some other runners and their dog, who is delighted to make a new friend and frolics around me. Everyone is friendly and we exchange “I acknowledge you as a runner” smiles and nods as we pass each other.

Sarah chips in and tells me I’m halfway, so I turn back towards the road. Just as I get there, I see an old concrete pillbox in the undergrowth. There was a training camp here during WW2, although it’s now completely overgrown, but I’ve not seen this before - I must not have taken this path before. I pause to take a photo. Apparently Sarah does NOT approve of this unscheduled stop, as she immediately crashes the app. I do some creative swearing, then restart the run on the app. I suspect Sarah’s trying to push me out of the C25K nest, like a mother bird with an clingy overgrown fledgling.

I am now back to the uphill bit before the final downhill. I start up it, but I feel absolutely ruddy awful, and realise I need to change approach. Thanks to @AnnieW55 for introducing me to the back-stitch method - without it I would not have made it back up the hill. It really does work. I back-stitch up, which takes about three times as long, but at least it doesn’t make me feel like I’m going to die in a ditch at the side of the hill.

As Sarah tells me I’m halfway, I am actually done, but I feel bad about the unauthorised photography break, so I carry on for another few minutes. When I finally do stop, Runkeeper tells me I’ve done 4.47km in 33 mins - that’s a surprising improvement on Thursday’s run!

Seems really weird that I only have one run to go. All being well, I’ll graduate next week. It’s great to be so close, but I’ll miss the achievement I’ve felt at completing each step

Brilliant! Well done 👍 May I ask what the back stitch method is? I may need that living on a hill!

sallensonGraduate in reply to Saartjie

I'm keeping "Heartbreak Hill" training for after W9. I am beset by hills on all sides. All steep, ugly and scary

thegirlfrommarzGraduate in reply to Saartjie

It really, really helped today when I was *this close* to stopping. Hopefully this link should take you to the explanation:

Hmm, well, THAT didn’t work. It’s basically as @sallenson says below - you run up to a marker, then back down to something halfway between where you started and where you finished. Then rinse and repeat until you reach the top of the hill. It gives you a bit of time to recover so it’s not all horrible climbing.

thegirlfrommarzGraduate in reply to Saartjie

Sorry about that - I could only tell the link was broken after I posted it! I have posted how it works above - but it’s pretty straightforward. I ended up going mostly across rather than back down, but it was enough of a respite that I didn’t have to stop.

Kate, you continue to be superb!! "Nauseous Adrenaline Backwash" (NAB) could easily turn into a "thing".

If that pillbox were smaller it could be a BobDylan-esque hat. Only without the leopardskin

Ha, if only I’d known the pillbox was there, I’d have put that on the playlist!

P.S. Don’t you think the pillbox looks weirdly judgey? I only noticed it when I got home.

It's the slightly stern-looking "mouth" on the LHS. It could be an Admin grown-up

And The Bridge was good.

I can’t help it! I live on the only hill in an otherwise flat city! 😂

I’ve done it! My penultimate run of the programme and it’s a good one. So proud that I’m...

trundling past them. I’m sure they say to each other how they wish they had the ability to run like...

music but I wanted to try a run with my own music for a change. I chose Sarah Millican as my...

Back to the standard 30mins for my next run on...