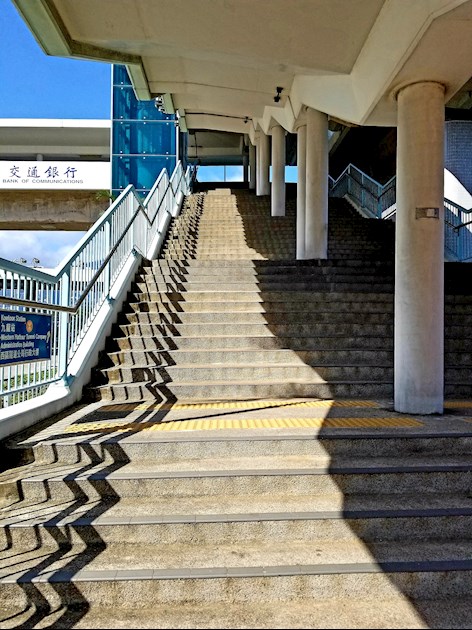 This was the last thing I wanted to see at end of 25 minute run. For the first time I took the lift up 😬

Run 2: There's a promise of a strong easterly so I head to the park. The first few minutes seem an eternity, then I find my pace. Hint: Very slow. An older, white guy dressed in casual, black clothes and sunglasses runs towards me. On his feet are a pair of black Birkenstocks. He holds his arms out either side of him, like kids do when they're pretending to be an aeroplane. He lifts his knees high as he runs. He is magnificent. I wonder if he has come directly from a night out in the infamous Lan Kwai Fong nightclub area and is still high as a kite. He's almost flying like one. The next time we pass each other, he is holding his hands out in front of him, as though checking for rain. The third time, he is running normally-ish, but the high knees running and shoe choice still make for an extraordinary sight. I wonder about his life, not least of which is that I cannot fathom why anyone would be out running in this heat dressed as he is.

The promised easterly wind does indeed exist, just not in the sheltered park where I'm running. I labour through the run and joyfully realise I have somehow timed the finish of 25 minutes to being near the vending machine mercifully selling Pocari Sweat, an aptly named sports drink. I will miss the park and the people in it; they absolutely make my runs.

Run 3: Still not prepared to brave the beast treadmill, I take the option of route 2 around the local buildings. I pop my running-in-the-rain cherry as the typhoon headed for Hainan brings feral conditions locally. Mick Jagger sings Paint it Black in my ear. I think of Vietnam, of the young grunts humping through the jungle in the most horrendous of conditions. Ha, and I think this is challenging? The first troops sent over were issued leather boots, old kit leftover from the Korean War. It took the powers-that-be a couple of years to realise the men needed canvas boots to match the climate, and changed the footwear and uniform materials accordingly. Cold Chisel's Khe Sanh begins. [I'm sensing a theme.] I visited the Khe Sanh battlefield last year... Now a beautiful, peaceful place, it does not bear the markings of the exercise in futility that was the war of attrition. War... what is it good for? My musings of doom are halted as I try to jog down a set of stairs. With jelly legs and feeling faint, I finish the run and week 7 wishing I had started this in January. But I didn't. I'm doing it now and that's all that matters.

Great post Dee, a treadmill run just won’t cut it now, your outside way more interesting and exotic, not sure about ninja warriors in Birkenstocks though! Wow! I’d feel invincible running to your playlist, Edwin Starr can still do it for me with that song, bought the Tour of Duty cassette tape, vintage. Ooh! Should suggest that for Sallenson’s play list.

DeeRunningGraduate in reply to lexi6

I've seen some pretty random things in the park but the Birkenstock ninja warrior is up there for the wacky. I still ponder what was going on. And blisters dude!

The treadmill is going to be Dullsville in comparison 😢

Been watching Tour of Duty again this year! Still love it.

Meant to say I bought the cassette tape years ago, when I used to be able to run up the 103 steps to my flat Cheap rent! Technology can be great after all.

Well done my love!! Pocari Sweat brought back a memory!

Are you sure that the Ninja Warrior wasn't just IannodaTruffe travelling incognito? He has been strangely quiet recently. He may be doing his own Tour of Duty.

Top marks for inserting almost too many song allusions to count. Top marks for finishing W7 and even topper marks for being an outstanding human being. Bonus point for having Paint It Black on your playlist.

Rock on W8! Dee's coming atcha. Be warned and be scared!!

Intriguing... may i ask what is your Pocari Sweat memory??

That would be totally awesome if the Ninja runner was Mr Truffe. He was an interesting apparition, that's for sure.

Thank you for your continued encouragement. W8... on the beast

My first experience of that awesome wholesome can of loveliness in the company of my eldest many years ago in Tokyo. Nothing dramatic nor ribald I'm afraid. Just an "awwww" moment.

Aww that's sweet. It's a remarkably good drink, despite the off-putting name

1) That sounds hot and sticky, well done for getting out there.

2) Now I want to watch Tour of Duty again!

Oh my, yes, watch it again. And China Beach!

American series, Dana Delaney, set in Da Nang. I'm not far into yet, pretty dated (made late '80s) but worth a crack if you're into that era

My era also, my friend. I was 18 when the series started, but got into all the re-runs in my 20s. Lol, now 48 and still watching re-runs. Need to get a new interest other than the war

Well done for taking on the elements like that, unfortunate that the breeze did not arrive.

It is interesting to hear about people's thoughts as they run. Who just concentrated on the run? Who enters a meditative state and ponder things while jogging along?

I admit, it still varies with me.

Thanks, Rob! I find it depends how I've decided to run... with music, the music will direct my thoughts somewhat. Without music, which is my preference, I can try to zen out a little more and just 'be'. Or just run. Without all the chatter. Each run is different though, isn't it, which makes it such an interesting activity. Can't predict what will happen next

Lovely report. Paint it Black is my favourite Stones track and that’s because of Tour of Duty. Somewhere I’d love to visit, along with many neighbouring lands, to see the Buddhist temples.

Thank you! It's my favourite track as well because of Tour of Duty lol. I even went to a Stones concert many years ago because I wanted to hear it live, but it wasn't on their playlist for that tour. Very disappointing

Great plan to visit, it's such an interesting part of the world. Hope you make it out there sometime soon

That would sound about right... I think I was early 20s? I saw them in Melbourne. Did you see them in UK for same tour i wonder?

Total tour fail though re leaving that song off list lol

I actually meant the programme, not the tour, sorry...

Many years ago I went to a wedding in Monte Carlo (as you do) where one guest provided the actual Rolling Stones as the band for the night as a wedding present. That was pretty f*in cool.

Fabulous 👏 what amazing experiences to remember. I love Birkenstock guy... That's me sometimes at work in my work boots "flying" back to my truck 🤣🤣🤣🤣 honest! (But only when I think no one is there!)

GoGo_JoJo I think I just fell in love with you a little bit. That is so cool you fly back to your truck. In work boots! 👍 Birkenstock guy seriously made my day. That run was on Sunday and I've been thinking of him ever since. Don't hide your joy from the world, let em see ... I promise you will make someone's day.

Or end up infamous on an online forum 😀

Absolutely! I also take no shame from my "Weeeeeeeeeee" as I complete sharp turns either, many of which are before reversing manoeuvres and witnessed by many a dour faced bloke. Most think I'm funny... some think I'm crazy. I just think it's fun and we have to hold onto all the fun we find along the way... life can have way too much non-fun when you're pretending to be an adult 👍😉

You are awesome. And correct, adulting can be tiresome and boring. Life should be more about the fun stuff! 🏃‍♀️💃🏊‍♀️🚴‍♀️🤸‍♀️🧘‍♀️

Aaaaw! Thanks to our earlier discussion and Jay66 I’ve just spent the last hour with headphones on listening to Tour of Duty tracks on Spotify. My night is now complete, my new porcelain throne awaits, alas no seat yet, (wonder if the Prince of Wales has any spares?) or has he got them all packed away? but I have a bucket of water and the heater has been on, drying out the plaster on the walls, so warm in there, actually will leave it there otherwise tmi. 🚽 👑

he will do the 5k Park run with me so I aiming to do that on 5th May. He is running the marathon so...

straight minutes and it was a breeze. I thoroughly enjoyed this run, more so than the 20 minute run...

Week 7 run 2 complete :) and I finished the time trial.

last minute in case I spoil my rhythm and don't complete the run, so I just add a faster minute or...

in the dark after work and just doing it. Also running in 3c isn't as bad as first thought. Base...