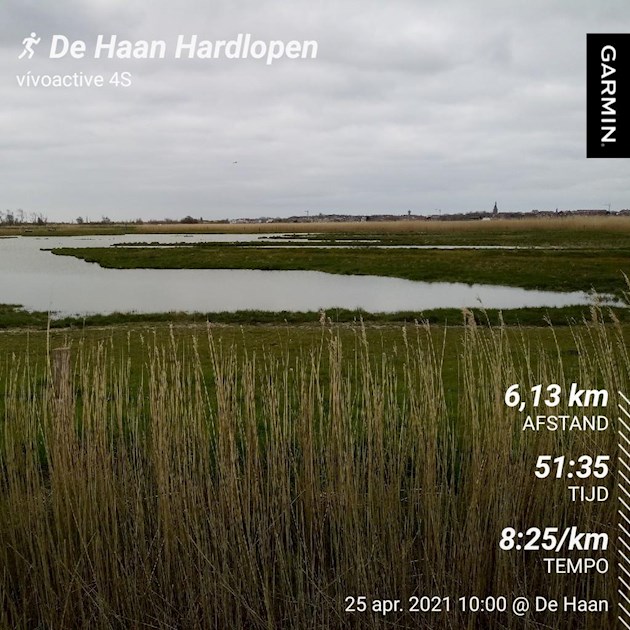 I had entered myself into the virtual version of the Antwerp Ten Miles Short Run of 6 km which you could run yesterday or today at certain times. You do this with an app and they mentioned you would hear what you would normally see when running in the real race and at which place you were and such. I thought, why not. You also receive a shirt and running belt after the race, so extra goodies. Only not a real medal.

Unfortuntaly they also played music at the same time as they were speaking and I could not understand a word of what was being said. Also my body was not in the mood, because I had done some garden work yestetday and my whole body felt sore. Luckily it did not intervene with the run. Did some warming up to get the most stiffness out of the muscles and that helped.

Anyhow, I was at my starting spot well before start time, using it for some stretches and warming up. The countdown started and off I went, turning on my watch too.

This weekend we are for the first time this year at our chalet at the coast, so I had the privilege of running in the middle of fields, sheep and cows, my favorite place to run.

That is excluding the wind and LOADS of cyclists. Several times I had to watch out for groups of cyclists, 1 time a group of 30 or so who refused to make room for me because of which I had to jump on the little spot of grass between the road and the creek.

Besides them asocial cyclists, all went well. I do think I started a tad too fast and was also running a bit faster than normal. But at about 2 km I turned at the cemetary and got 2 to 3 km of very strong wind to battle against. At some moments I felt as if I was standing still!

Luckily somewhere between 4 and 5 km the wind slowed down a bit and running was fun again.

My watch suddenly said I passed the 6 km, but the app was still at 5,8 km. When the app said I had finished the 6 km, my Garmin showed 6,13 km. Who is right and who is wrong?

Anyhow, I finished 39 of 46 people who chose the same starting time, so I was not the last one!

Now I take 2 days rest. Between the garden work yesterday and the run today, I think I will have to crawl around tomorrow...

Wow. 👏🏻👏🏻👏🏻Well done for being so determined in spite of the wind 💨and tiresome cyclists etc!! Enjoy your well- earned test in the chalet at the coast (which sounds sublime!!).

Well done 👏 on your change of scenery run sounds beautiful. Is it flat or hilly there like Holland ? A few cyclists here on the same route as I run just a path come right up behind you and your usually just about knocked over. Never ring bells maybe don’t have anymore. I was out this morning as well first time after vaccine took it easy 5 km , hip and groin started nagging at 4 km but kept on going . Time 41.04 . Hope your groin is better now. Have a good rest tomorrow and enjoy your break at your chalet 😊

BlackScorpionGraduate10 in reply to Doris8

Flat, very flat here. Both at my home as here at the coast. And yeah, 1 cyclist nearly touched me, so close that he rode next to me. It is here very popular with cyclists. They come here in groups to train. But they forget they are not the only ones using the road. There are also cars once in a while and then you also have to go aside the road (very small road). But it is nice to walk and run here between the fields.

We arrived yesterday morning and are going home again in an hour or so. We come here already from before my birth. My parents bought the previous caravan when they were expecting me. That caravan got trashed in a storm in Januari 2007 and then we replaced it with an upgrade, a chalet type. We used to cone nearly every weekend from April till November. But ever since we have Lily (our black cat - she is with us since October 2019) we only come when it is good weather. Sierra (our nakey cat does not mind car rides. But Lily yodels and cries the whole road. So we don't put her and ourselves under the stress of riding if they promise bad weather.

Doris8 in reply to BlackScorpion

Sounds good to me especially with all what’s been happening with Covid . A nice relaxing weekend apart from your run. Enjoy what left of your weekend🙂

Woohoo 🥳 🎉 🙌 Well run! Sounds like it was a bit of a different and exciting adventurous run, despite music/voice over and bicycle issues.

Fabulous stuff! Are you getting a medal?

BlackScorpionGraduate10 in reply to CBDB

No unfortunately there are no real medals with this race, too bad. I should get a t-shirt and a running belt though. Nevertheless I would have liked a medal, haha.

CBDB in reply to BlackScorpion

Ohhhh, running belt sounds great, but I know what you mean with bling! 🤣

Well done on completing the run. I did the 10 mile version and thought it was great fun. I thought that the app that was used was really good and although there wasn't an English commentary I managed OK with the French version. Its great to see other people on the forum taking part in the same event.

BlackScorpionGraduate10 in reply to 00marks

Ah, you did the Antwerp Ten Miles? Nice! Maybe I had some setting wrong, but I could not hear a single thing that they were saying, due to the music being played too loud over the speaking 😔

So glad you got to your chalet! It sounds lovely. I did some garden work recently, was amazed I could run the next day! All the best 😊👏🏼👍🏃‍♀️.

virtual race they also offered for those not in the area. A friend of mine and her daughter also...

Second 10 Mile Run In The Dark For Some Bling

medium tee shirts left but hey ho. Having done this I had a 10 mile run hanging over me, which had...

It was only ten miles not eleven but I did it

steep hills and main roads to cross. Got a park run tomorrow, hope my legs will be up to it.

Plus, no one warns you that once you start running for over an hour and a half you want to eat...

in a VW camper and not a tent 😂 I had intended to do a virtual run, but sat on bed with a cup of...