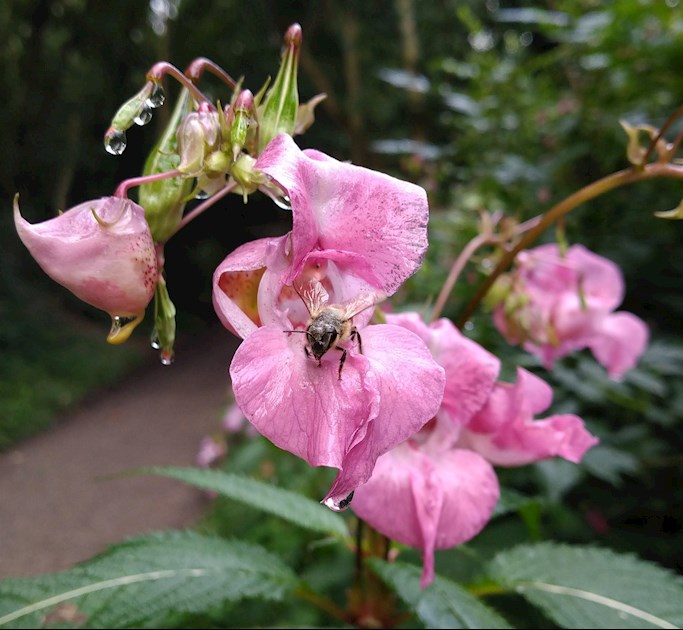 A late start (for me) not getting out till 8am already 16.5° and feeling very humid. You can hear the excuses already can't you 😂

Set off in the opposite direction along my 5k route meaning its uphill to start then a long gradual incline. I was doing OK but really wasn't feeling like it and what I really wanted to do was stop and look at the view! So I did, just for a minute or so, set off again but having stopped once then why not again? In total I think I stopped 3 times, one stop involved walking along a very overgrown footpath that looks down onto the old rail track but also has lovely views. Sad to see it so overgrown but it did mean there were more blackberries for me to eat 😋 Plus I got the lovely picture of the bee coming out of the Himalayan Balsam, which I know it's so invasive but bees love it. 🐝

I did remember to pause and restart my watch so I did end up running for 30 rather interrupted minutes! 😁

Not quite the run I intended but I enjoyed it so that's what really matters.

Happy running, or stopping and starting

If you enjoyed your run dijep, then it was the right run for you 😊. It sounds like a lovely run to me.

I'm home from my hols and my running schedule has been interrupted by the recent weather. I should be out today running and I'm hoping to squeeze a run in between the heavy downpours that are forecast all day and the thunderstorms due later on.

I thought of you and scrumpingrunning as I snaffled the blackberries 😊. I want enjoyable running so at the moment if I want to stop I'm not going to beat myself up about it. Though next week I'll probably have changed my mind!

You do what feels good for you, whether that's scrumping blackberries, pausing for photos or to look at the view. I'm up for letting the runs unfold too. It sounds a good philosophy 😊.

Hidden in reply to Delly-dot

How have you been, all ok?

Delly-dotGraduate10 in reply to Hidden

Hi. All good, thank you! And you? Have you been rained off like the so many of us? 😊

Hidden in reply to Delly-dot

I love the rain and it's hammering down now so I'm going to do my 5 mile run in a moment 😃 good luck on your next outing.

Delly-dotGraduate10 in reply to Hidden

Sounds like an absolutely beautiful run or run-stop-run aka your own version of fartleks 😄 I think we get too hung up on just running (I know I do!) I'm all for a more relaxed and flexible approach, makes things more interesting and enjoyable 🌷🐝🌻 plus you get to eat blackberries! 😋

I'm just going to start running from one blackberry patch to the next!

Fab! Your very own interval training plan, I'm in! 🤣💪😋

It's like a cake really, how you run and what you do along the way are all ingredients. So do what you like and run with freedom. The 30 minutes were done and the cake is ready!!

dijepGraduate10 in reply to Hidden

It sounds a lovely run dijep!! Why frantically run at the cost of enjoyment. 5k in the bag whichever way you look at it !! Well done 👍

Thats how to enjoy a run dijep. I don't stop and take photos as nearly all my runs are on the pavement and the only photos I could post would be cars🤣

I take far too many photos when walking already! Sometimes I get a bit fed up with the rail track but then I realise I'm reality I'm so lucky to have it, I could be in the middle of a city with only roads to run along.

Another lovely photo and a run to match! There's a lot of joy beaming out of your post - great stuff!!!

Yes I enjoyed it, especially the blackberries 😋

time on continuing my runs (I’m running 10K now thanks to Juju plan) and will start strengthening...

heart told me I had to run. Besides, the current Mr Slinky had promised to run slowly with me...

Set off to do 45 minutes as part of the Magic Plan. Had to stop after 38 minutes - so still a decent