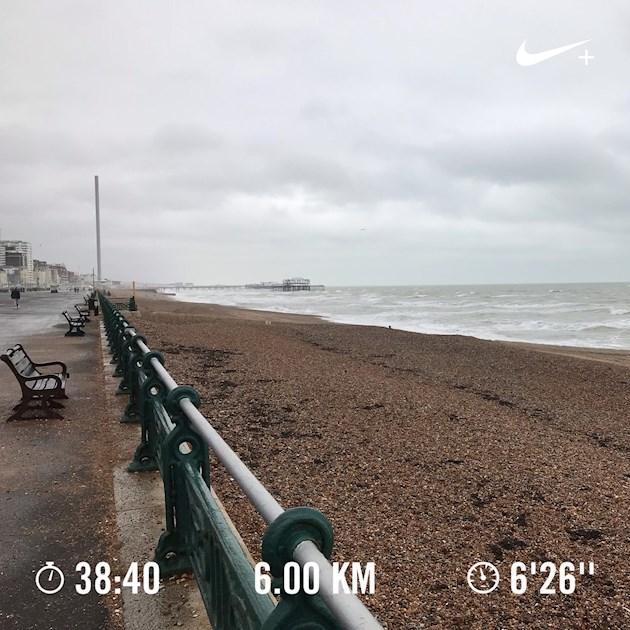 I don’t know what has happened to me where I look out my window on a cold, grey, windy day like this and think “I really want to go for a run.”

The thing is, because of the way my runs got bunched up at the start of the week, I had a space to run today though I had done all of week 1 of B210k. So I went out and did the 6k run from week 2. This could mean I have started week 2 already but I think I might repeat this 6k next week so I am back in sync with ju-ju-‘s updates. But I’ll see how I get on.

I found the 6k quite hard but I’m not sure if it was due to the extra distance or the weather as I always seemed to be running into the wind, both ways along the beach. I suppose it was coming off the sea and was sort of sideways-on.

I’m pleased to have done the run but even more pleased to be back inside in the warm!

jimmersGraduate10 in reply to Bridget007

Well done jimmers, your week can be anything from 6 days onwards, so I would count it as first run of week 2. You may want to add an extra rest day later so that would give you one in hand. I’m a week ahead of ju-ju as I started early.

jimmersGraduate10 in reply to Dexy5

Looks a lovely place to run

jimmersGraduate10 in reply to Deals1

I’m sure you’ll smash this plan!

Looks a great place to run! 🙌

I think it makes such a mental as well as physical difference having the opportunity to run by the sea and breathe in fresh, healthy air. If I’m tired, I just think how lucky I am not to live in the middle of a polluted city and can watch the waves while I jog.

jimmersGraduate10 in reply to Rosy230973

Yeah! I’ve alway lived by the sea. Before I started running, I’d go for walks along the Prom. I don’t how I’d cope with living inland!

morning and I had already done a 6k run when 3 and half months ago I couldn't run for a min,...

Possibly the longest run of my life

the run. I was gutted when I realised I’d only done 15 mins! My head definitely dominated this......

steadily into the Spring with shorter runs and 5ks, between 1 & 3 a week dependent on injury, work...

for the program without which I don’t think I would have done it. 😉🏃‍♂️💪

Some of you may know I've been running to podrunner.com fixed-tempo running music. I hate the...