Piggies Galore!: Yesterday I completed my... - Bridge to 10K 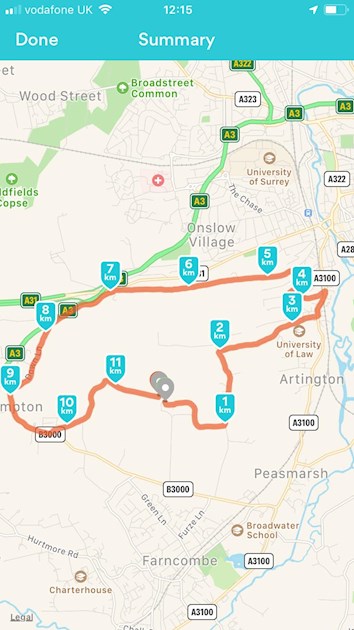 Yesterday I completed my longest race/event to date, the 11.4km Hogsback Road Race, notorious locally for its very hilly terrain. It started at Loosely House and the course soon climbed up onto a ridge known locally as the Hogsback. Piggy #1

My aim was just to complete the course in one piece, my 10k time on the flat is usually 75-80 mins, so was really chuffed to clock a sub 90 min time. The medal is in the shape of a piggy #2.

Three ladies had dressed up as pigs, in pink outfits complete with piggy ears. Piggies #3-5

The route maps out the shape of a pig (how cute is that?). Piggy #6

A friend on FB commented that his back legs are misshapen, he is an arthritic piggy and I thought that was a very good description of me struggling up the hills. Lucky piggy #7

Teri73
Graduate10
To view profiles and participate in discussions please or .
18 Replies
•

Yes the route on the map kind of resembles a pig🐷🐖, well done on completing the course 😊.

Well done Teri73, that is a brilliant time for that hilly area. I’m not sure I would have got further than the ice cream shop at Loseley House and ended up looking very much like a 🐷.

Teri73Graduate10 in reply to Dexy5

Haha, too true Dexy, their icecream is rather nice

Fantastic run Teri...not far from me, and the hogsback is indeed a big hill!

Hi Teri73, Well done to you! Congratulations!😊🐖🐖🍾🥂🎉🐖🐖🏅👏🏻👍🐖🐖☀️🏃🏻🤸‍♂️🏃🏻🤸‍♂️🏃🏻🤸‍♂️🐖 I wonder how well you legs have recovered? Because some of my routes are hilly, I am always interested to hear about other folk on their hilly runs. Does your running app give elevation gain, I wonder? Even elevation gain isn't the whole story as long and gentle is so, so different to short and steep! Well done to you!😊

Ooh 61+, if you had a snazzy sports watch, you'd be amazed by all the wonderful graphs it produces on your PC for elevation, pace and heartrate. you can overlay them too. It can keep UpTheStanley occupied for hours.

over61andstilltryingGraduate10 in reply to Dexy5

Lol! Rumour has it Mr 61, alias Father Christmas, ordered one on Black Friday! I'll have to keep running another year to justify the expense! I'll probably need serious help knowing what to do with it!

Ooh exciting. Plenty of people to help you on here. It’s easier than I thought it would be. 🎅🏻

Love all the piggy icons 61, they're brilliant!

Runkeeper says the Hogsback race involved 191m of climbing, but that also means 191m of descent too, now that was fun!

I even managed to overtake a few people on the long downhill section from the Hogsback to Watts gallery.

I too struggle with hilly runs (especially hill sprint sessions) they make my left hip seize up for several days, my muscles were a little stiff yesterday but mostly fine today. I think the extra few mins spent stretching after the race did their job. How do hills affect your legs?

over61andstilltryingGraduate10 in reply to Teri73

I have run my very local hilly routes quite a lot. So mainly my legs are just used to it, but there is no doubt that hills take more out of me than flat. I have been using an app called Run the Map on my phone. It does give elevation increase, but I know it is not very accurate. On my journey to 10k my 9.62km run gave elevation increase of 272m, but my 10km rote, the same out and back route but obviously I went further before turning around, only gave 243 m. They can't both be right. Some of the very steepest parts are currently too muddy and I have just discovered a much less hilly route mainly on pavements which still has some good views. I am very, very slow on the steeper parts. I'm not particularly speedy running down hill either! Happy running to you! 🐖🐖🐖🏃🏻🏃🏻🏃🏻😊

Nothing wrong with being slow on the uphills, I found that I could overtake some people who were doggedly (pig-headedly?) try to jog up the hills while I was speed walking up them. Talking to my physio about this a few weeks ago she was strongly in favour of conserving energy for the down-hill sections.

Thank you IP, it was a good'un, I'm definitely up for entering it again next year, see if I can shave a few minutes off my time with a year of training in between.

Well done Teri - having gone to school in Guildford, this is near my old stamping ground. We used to do cross-country running and I hated it! How things change!

Teri73Graduate10 in reply to JonathanP

Thank you JP, its funny I hated XC running at school too, but in a strange way, C25K was my way of shutting up that nasty little gremlin who sits on my shoulder singing, "haha, you can't run, you can't run". Maybe you should come back to your old stomping ground next December....?

JonathanPGraduate10 in reply to Teri73

Thanks Teri, I will certainly give it some thought!

No medal bling yet, but plenty of postcards to keep my motivation up. Added a 2k row yesterday to my

to complete 10K, the first one since leaving the IC... I got lost twice, met some helpful locals, in

there 15 mins before, is that enough time to register etc?

between the 10 mins warm up and cool down, the run in my plan was 4 miles.

Look what Willow got!