Realfoodieclub does her Half marathon. - Active 10

Firstly I am sorry this has taken me so long to put up. I have been a little under the weather since but it will all make sense as I explain.

I had been worried all week that it would be cancelled because of the beast from the east but on Saturday morning we got the confirmation that it was going to go ahead. Saturday night I ate my pasta and tried to get an early night. I cannot sleep well the night before events as I get so excited.

I was up at 6 am and got out the door for 6.30am . I got to Tower Hill with lots of time to spare, I was lucky that one of the forum members for the running forum was there as well so we just nattered and had a good old gossip for over an hour before we started. It was great fun and I was really relaxed. My training had not gone to plan this year. I started this year with full on flu. three day with a temp over 102 and low grade temp for a whole week so I had to give my body time to recover from that, then just I started getting back into training my lovely Dad took a tumble and I shot up north to look after him, another three weeks out of training so I wasn't quite where I wanted to be for the event but I thought if I take it easy I would be fine. I had done an 18.2km in training so I wasn't totally unprepared. A half marathon is an event you have to give respect to, I have heard so many people in the start of a HM saying they are totally unprepared saying I will just walk it, it is still a beast of a walk if you have no baseline fitness.

the first 5 km were brilliant. I was beaming from ear to ear and having the time of my life. then between 5-7 km I started to get a blister and my glutes were hurting a little. then around half way I started to struggle beyond belief. I finished but I t took everything I had inside me to push to the end. From 17km onwards I was just counting down each 0.5km.

I was a mess at the end, but yesterday I found out what contributed to my event taking such a downward turn. I am intolerant to sweeteners and around the half way mark they give you a Lucozade sport drink to boost your energy levels. I have since found out this is now got sweeteners in it, so I basically did the last half dealing with something that my body felt was a poison.

Yesterday I had a terrible morning I couldn't keep my breakfast down and I felt like I had the mother of all hangovers. It took me to the afternoon to piece together what had happened and as I did it all started to make sense. I took an antihistamine and the effects started to wear off. Today I feel fine. I have a blister on the whole ball of my left foot which is normal for me for these long events. But I will take things easy for recovery for a couple of weeks then get back to it, ready to do it again on the 20th May.

The points I will take from this are. Try to fit in all your training, don't injest anything that you haven't had before during an event and if anyone has any ideas on how to stop blister please share. At least this time I only had blisters on one foot rather than both. This time I used memory foam insoles, talcum powder and tight pop socks.

happy walking to you all. 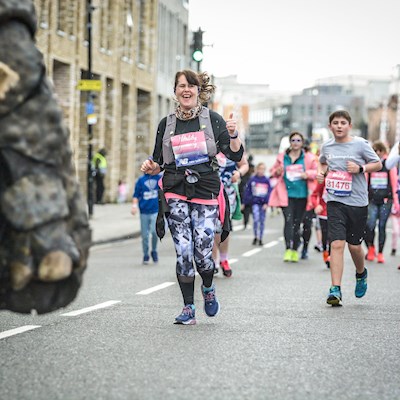 Realfoodieclub
To view profiles and participate in discussions please or .
Read more about...
13 Replies
•

Oh RFC! That's an amazing effort! You really have to be happy with that, despite the hiccups along the way. What a fantastic way to celebrate your year of recovery and hard efforts. I can only imagine the difficulty with each step after 17 km. Congratulations - I hope you are putting your feet up for a few days.

As for blisters, my trick from when I go hiking is to wear nylon footies under my socks, I always have a pair when I travel, and you could slip them in a pocket during an event, they don't take up any space at all. I also used moleskin once, but that was after I had already gotten a blister.

Thank you. Feeling so much better today than yesterday, I still am finding it amazing how much my intolerance to sweeteners affected me. I have been resting up. I have a catering do tomorrow night so I will be on my feet all night. I have ordered some moleskin on Amazon prime so hopefully that will help. I have never heard of it before but if it works it might be just the sort of thing I was looking for. Thanks for that.

Rfc - almost a year to the day you were in hospital having a very major operation. Just look what you've achieved! You are one awesome lady - so positive, determined and strong!?! Everything seemed against you with this half marathon, but your strong will (stubbornness, if you like!) got you through to the end! So very many congratulations!?!

Thank you Kay. It has been a long year but I am so pleased I completed the HM. My Mum used to say I was stubborn and I’ve always worn the badge with pride 😀. The next one will go better.

That it will - but you've already earned your spurs!

Wow well done to you Realfoodieclub that's an amazing achievement with the problems you have had to endure leading up to it. I have done the Moonwalk in London 4 times and the last time I did it my IBS kicked in and I struggled to make it to the end but I did but I really did suffer afterwards. I totally agree with you re the training you really do have to put the training in but you had so much to endure before your half marathon so you have done amazingly well.

Re blisters, I find the best thing for blisters is Compeed blister plasters, here is the link for them - compeed.co.uk/compeed-footc.... You can buy them in many places.

Also, all the very best for your next event.

Thank you, I will look into compeed. Well done on the moonwalk’s such a great achievement. How long did they take you? I am interested in that one but I really like my bed at night and dont know how I would cope with the staying up. 😀😴.

You are welcome and I have used them lots of times, they are so good but you have to make sure it's the Compeed ones you buy and not the stores own version as they don't work very well. The Moonwalk too me 6 hours and it was hard going but so so worth it, I didn't actually miss my sleep at all as for the first 3 years I did it both my hubby and I booked a hotel room and stayed in London for a mini break. I walked back to the hotel room the first year I did it as it was only down Oxford Street, the second and third year I got a taxi back to the hotel. When I got back to the hotels I had a shower, went down for a lovely breakfast, that's the best bit

and then we went out sightseeing for the day walking around London. Having the shower makes all the difference. The fourth year I did it I struggled more even though I still did in in 6 hours, the problem was my IBS was playing up. I am determined to do it again though as it's a fantastic feeling.

Once again, well done to you, you are an inspirations.

I have IBS as well and sometimes it can put such a wrench in my walking, hiking and running. Lucky for us one of the race series that I do is small enough that the director has given me his personal phone number in case I need to bail en route, so they don't send out the search parties.

Oh no, that's not good. IBS can get in the way that's for sure as you never know when it's going to strike next. I am keeping a diet sheet now and am under a Dietician and am feeling better that's for sure and I think it's because I have to record everything I put in my mouth. So pleased you have back up, that's always a relief and makes you feel better and less anxious as well.

Congratulations and well done for completing the half marathon under such circumstances. I'm sure some would have fallen by the wayside. You must have been very driven and motivated. So glad you are feeling better as the days go on. (Here's to the next one 😉)

Realfoodieclub in reply to Mazzy00

Thank you, as soon as this blister heals a bit more, I will be ready to start again, what a difference 24 hours make.

It was fantastic meeting you. For blisters, I recommend double socks: there are two different socks in one, so the rubbing happens between the two pieces of fabric rather than between your skin and your sock. You can find them online and at Decathlon. I hope you're feeling better now. That Lucozade stuff was disgusting.

Central London ready to start my Half Marathon at 9am.

I will be having my pasta for tea tonight...

A training session and a half tonight.

Tonight at my race walking session it was event simulation for the start of my Half Marathon a...

better all the time. My pace has been stuck for a few weeks but I have a half marathon two weeks...

This mornings walk by the lake in the forest.