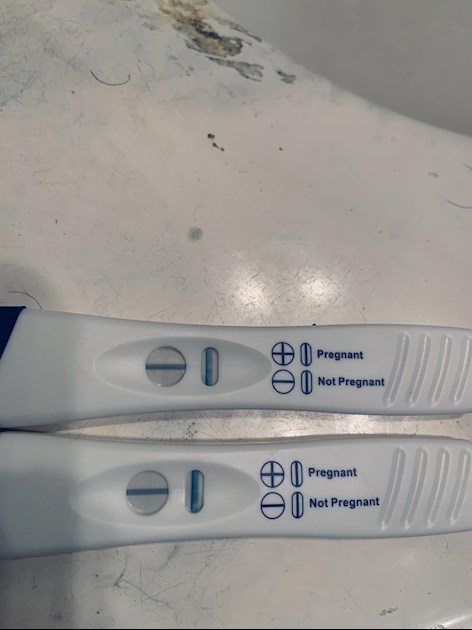 Looks negative to me

I'd say not pregnant, but be careful if you don't want to get pregnant!

Looks negative to me, but just to be sure I would purchase the kind of pregnancy test that actually says “pregnant” if positive. You won’t have to worry about lines.

I know "hidden" means the person has left the forum, but in case they check back...

36 hours is too soon to do a pregnancy test. Most won't tell you any sooner than 2 weeks.

You can take the morning after pill up to 72 hours after unprotected sex, so that can be an option for next time.

Pull out method is not a reliable form of birth control. There is still a risk of pregnancy, even if he remembers to pull out, as sperm can leach out during sex.

Blossoming19 in reply to Cooper27

Read by post below, I agree, if this test is positive she would have been pregnant prior to the scare. With the pulling out method this wouldn't shock me.

I disagree with everyone in the comments, I can on both pregnancy tests see two faint lines. (the clear blue pregnancy test is the one which creates a cross rather than two lines) However, blue dye tests are not usually advised as the ink can run, also a clear blue test detects pregnancy at 25/mul which is as standard as a normal shop bought cheap pregnancy test by for more than half the price! When pregnancy testing anything below 5mul is considered negative but anything between 5-25 is a grey area whilst over 25mul (mul is the pregnancy hormone measurement) is positive. I would recommend getting a first responce early detection pregnancy test.

I don't want to be patronising but.

a) The pull out method is not an effective method of pregnancy prevention. If you don't want to fall pregnant you should use protection.

b) I hate to say it, if this test is positive and you are pregnant, you were pregnant before the incident your partner didn't pull out. A matter of days would not be enough time as usually unless it is a blood test a positive urine test will be positive at least 8 days post ovulation. You can only conceive within your fertile window.

You are most likely to get a false negative then a false positive, even if the positive is very very faint, you are quite likely pregnant.

find this procedure intolerably painful, and many faint, vomit or have to abandon the procedure....

boyfriend on the last day of my period and took combination pills the day after since we don’t have...

listening to me. I try my best to deal with it and be positive, but it is now more than 24 years of...

of ribs on Saturday night as well. Now i also have one swollen tonsil, ear pain and a very sore...

hello, this is my first post, please bear with me, thank you

or outings. My quality of life has become very negative. I am depressed and now I turn to food. I