Cutie in a different place.: Hello everyone Its ppp... - LUPUS UK 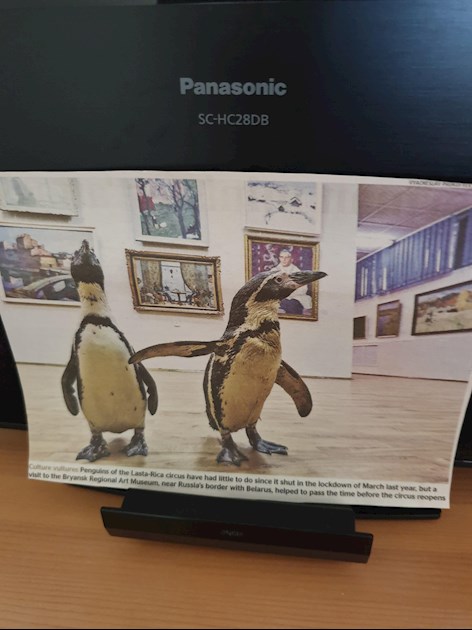 Its ppp pick up a penguin time because this week's pic is of two circus penguins who got very bored of lockdown in Russia. So They decided a trip to the local art gallery would be much more stimulating and as you can see they're enjoying the paintings.

Hope this gives you a smile on this rainy sunday and your all as well as can be. Dare we hope about the ⚽️!. 🤞

misty14
To view profiles and participate in discussions please or .
35 Replies
•

Those guys have the museum to themselves. What a lockdown treat!

misty14 in reply to KayHimm2 years ago

Glad you liked it kay. Aren't they lucky?. Hope your having a happy sunday. Xx🐧❤🐧

stillsdisease in reply to KayHimm2 years ago

Night at the museum! 🎥

They are adorable! Look like they are really admiring the artwork! Been having a quiet day today. Long soak in a warm bath this morning and just relaxing this afternoon. Sunday is my ‘do very little’ day! Hope you are well. Xx 🛀 📕 🎶

misty14 in reply to GloomyEeyore2 years ago

Hi ge, glad you liked the pic. Hope you and your mum enjoyed your birthdays. No wonder your relaxing after a busy week. I try to have Sundays off too. Its important for us to have 'me time' so good for you ge. Im learning to look after myself better, not always easy!.

I hope you've enjoyed it. Do you watch the tennis?.

Im off to podiatry on fri hopefully will get more help for this painful foot.

GloomyEeyore in reply to misty142 years ago

Glad to hear you are all well. We are all well in my house. My uncle unfortunately caught Covid. He has an atomimmune illness and blames himself. Went to London to see the Scotland v England game at Wembley. Thought he would be ok as he is double vaccinated. Thankfully he is fine now and didn’t need hospital treatment

I really enjoyed my birthday. Quiet and spent with family. Went out for my Mums on the day and will go out for mine later, possibly this week. Twice two days apart is too much.

I don’t watch the tennis and don’t even mention the football!

misty14 in reply to GloomyEeyore2 years ago

That must have been such a worry ge but proves if we're vaccinated we get a milder illness!. I still dont want to put it to the test and im sure you don't either.

There will be many having covid now after these big gatherings. Im glad your uncle is recovered. Which auto-immune illness does he have?.

I do hope you enjoy your birthdsy celebration ge. Glad your mum enjoyed hers and your all keeping well. Keep safe. 🐧❤🐧Xx

GloomyEeyore in reply to misty142 years ago

He has psoriatic arthritis. Didn’t tell any but his immediate family, (wife, obviously, and adult children), that he had Covid until he had recovered! Xx 🌈

Painful to walk thanks stills for asking. Im seeing podiatry on fri and hope for help. How are you doing?. Xx

Flare from jab starting to fade I think, so that’s 7 weeks since the second. I’ll be glad to get off the codeine and cut down on the prunes 😂

Thats a long time stills so good your improving at last!. I have to take movicol as prunes don't always work. 😀Xx

misty14 in reply to svfarmer2 years ago

They do don't they svfarmer. Wonder which they'd choose. ?. Ha!. Hope your coping. Keep safe. Xx🐧❤🐧

You mean you wonder which painting they’d PPppppick 😂

So glad you liked it cecily. Im in a lot of pain thru still waiting for leg injections and foot hurts to walk. Luckily ive got podiatry appt on fri. Thanks for asking.I do hope your Rheumy appt went well today. 🤞❤🤞

What happened cecily. Im so so sorry. Xx

That's really tough ,tricky and rude cecily. That's the trouble with the phone you have no idea if he wrote down for next appt. Do you get your clinic letters?. They should put it on their!. I understand how you feel re colchicine as you've already tried it twice . I've been so lucky not to be affected like you and take it with no problems.

What about Hydroxy?. Why don't you want to re-try this?. It can be problematic side effects wise but I take mine every other day!. I have found that consultants do change if your not willing to try their suggestions and trouble is their treatment options are limited more so probably for Behcet's!.

Thank you. Today I am ok, no worse off than I was before if no better. I took 400 mg Hydroxychloroquine for nine years. Then my Rheumy left and I met Mr Arrogant who increased my dose to 600 mg. I developed Macular Odema and have not taken it since. In my last Opticians appointment I still have fluid behind both eyes, plus the start of a cataract. The Optician advised strongly against taking it again. Twice I have had hospital scans and both times the Opthamologists declined to see me because the fluid levels were insufficient to treat. Despite the Optician writing twice for clarification on the Hydroxy the Ophthalmologist declined to respond . Therefore I have refused it until someone who knows more can advise me. He wasn’t happy but it is my sight xxx

Oh cecily that was a ridiculously high dose of hydroxy to increase it to and for such a long time. Criminal really!. What was he playing at?. No wonder you developed macular oedema. I don't wonder you've lost confidence in the drug and the clinicians who when asked for advic e re your eye scan results couldn't be bothered to respond. I wouldnt want to take it either.Ive got first signs of cataracts too , thats the steroids not hcq.

Its a shame as they've brought out a 300mg tablet now of hcq which is much easier to take.

It sounds like your rheumy appt really is just going over old ground without offering other different treatment options. You could do with another change maybe?. Im really sorry cecily and hope you have better help with your knee. Keep safe. Xx

I was only on the 600 mg for about 8 weeks before my vision started bothering me. One look at the Ansler Grid and it was dancing about. I rang my surgery for advice…we don’t deal with eyes 🙄 so went to Specsavers where I found I had little peripheral vision caused by the fluid. I was sent to the Macular Unit but of course in Wales this is Specsavers so I never saw an Opthalmologist in person. Six months later at the next eye check I was sent there yet again and still never saw an Opthalmologist. So the Rheumy wishing me to start it again can whistle frankly. He made such promises initially. I had my hopes raised and waited patiently, he had said as soon as the clinics open I will have you in and we will start from scratch. Well obviously 18 months in my area has made him weary already sadly. He was disinterested . Never mind. I haven’t lost anything . I am sorry that you have the start of cataracts too Misty xxx

No wonder cecily that dose affected your eyesight so quickly. It's way too high for long term. I just don't understand how a Rheumy dr could get it so wrong. Also shocking that you didn't see an Opthalmologist twice. It's good you went to Specsavers as they are the only optician to offer the special OCT test before HQC . The others here don't and NHS was supposed to be offering the routine check but before they introduced it covid struck and it hasn't happened yet. I'm about to go to Specsavers for my eye test and the special test I never had. A story like yours makes me think!. It's very sad what has happened to your Rheumy as I remember how he appeared to be and you must feel so let down and betrayed!.

I wonder cecily if he's also seen quite a lot of covid patients and it's also worn him down never mind the backlog waiting lists!. By comparison we Lupies have it easy compared to covid and long covid ,these doctor's could be thinking, but there are aspects that are very similar!.

Just a thought but I don't know where it leaves you?. Hope you get the clinic letter soon.

I'm off to podiatry tomorrow so must do my notes. Keep safe and I'll do an update soon. Xx

All hopes ⚽️ now transferred to the world cup! After all, it is only next year!! 🤪

It will flyby stills. Hope they get a lot of penalty practice in for then!. ⚽️🤞⚽️

Thanks for the cute pic. Will be thinking of you at your appointment on Friday.

Thats very kind of you pumpkin to even remember!. I will do an update with next week's pic hopefully with better news. Have a good week yourself and keep safe. Xx🐧❤🐼

misty14 in reply to honeybug2 years ago

special moment that i hope goes well for you all. Keep warm, well and safe. MistyX

program as they're so under threat in the wild. Lovely seeing Mum holding him tightly!. Hope...

How about this little cutie

exercises!. Ha!. 😊 Hope your all keeping as well and safe as possible TAKE CARE MistyX

thought i would post this lovely pic of two cuties that give us hope that Spring is coming. The lad...

Anyone want to contribute?

Not sure what to do …