I am not a negative Nancy…

I appreciate c25k means running for 30minutes by the end and not focusing on the 5k but just thought I’d be covering a bit more ground ya know.

Can people share their experiences at this level pleeease x 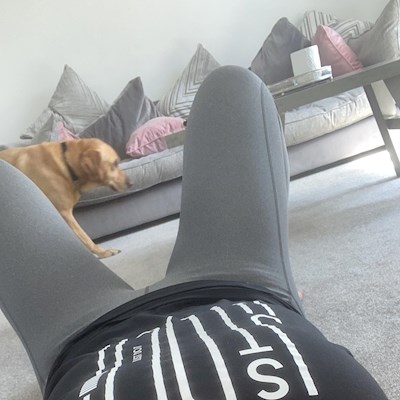 Leledange
Graduate
To view profiles and participate in discussions please or .
31 Replies
•

Pace is irrelevant !It's time running that will build your strength and stamina .

Don't worry about it , your doing fine !

Have a look here: healthunlocked.com/couchto5....

I've no doubt that as you get onto the home straight of Weeks 7, 8 and 9, that you gain even more fitness and actually speed up a bit and therefore cover more ground.

How far could you run in 25 minutes 8 weeks ago?

First we build endurance and fitness and then speed comes… if we want it to.

Nike’s global head coach does a few timed guided runs, in one of them he points out that no matter how hard you run, the finish won’t come sooner… so relax and run easy. He’s my favourite coach, he pushes me hard sometimes too of course.

Your run looks identical to mine. I ran 25 minutes too. We are awesome.

I get the concern, but I think worrying about it at this stage is counterproductive. If it depresses you, you'll be unlikely to be motivated to keep getting out there and then it'll never improve. I can't remember what I did on that run, but my week 9 runs were about 3.6-3.7 k. Now, with a couple more months of running under my belt, I can cover around 4k in 30 mins, even when running part of a longer distance - not exactly a speedy hare, but an improvement. It's also worth thinking about where you're running - off road, with uneven terrain, or a route with lots of hills will slow you down, so give yourself some leeway if that applies to you!

I felt like this too but your body is already doing so much work by increasing your stamina and endurance levels run on run. There’s a lot of work going on in the background that you can’t see but will physically reap the benefits from as you continue to run. I’m in week 8 and had nothing averaged over 3K so you’re doing great for this stage of the programme!

Don’t feel bad Leledange! I was probably at the same distance as you and by the end was only doing barely 3k in 30 mins. In truth I’m not much faster now but I can run for longer! And don’t forget you’re running, actually running- and I bet you never thought that was going to happen did you?! Go you!

It’s the running for 30 minutes I’m aiming for and when I graduate, because I will, I will then set myself distance goals. 25 minutes running is a fantastic achievement. Nice one

Very similar here. Did week 6 run 1 on Monday. Distance was ok but pace was awful. Suddenly found I’d run a lot slower! That being said, at this stage all I want to hear is the app telling me I’ve finished and I’m on my cool down walk. I guess it’s like running a marathon just to say you have. Completing it is the key. How far and how fast are what pushes us forward once we can. Try to save that for when each run is 30 minutes plus. Use the distance and pace to keep driving you forward! You got this. 👍🏻

Thanku so much David u r right x

Only a small proportion of graduates from this forum who responded to a poll, managed 5k in 30 minutes by graduation healthunlocked.com/couchto5....

Graduation requirements are that you complete three thirty minute runs, regardless of distance.

Yea this is interesting Thanku, I’ll get there! Signed up to a 5k October 3rd so that is something I wanted to run non stop:. Never know!!

I agree , I felt a bit deflated and I was hoping to burn more calories. But as others have said its increasing your stamina and running for 25 minutes is an achievement!

LeledangeGraduate in reply to Apprentice1932

You are so right, I think it’s def important to remember I could t run for a minute without massive effort a few weeks back, 25 mins is frickin amazing!! Thanku so much for ur words x

Don’t give up. I started c25k in approx April last year and found it really hard going. It takes time to build up your pace. I was by no means a natural runner.

Last month I did my first half marathon at the age of 50. Stick with it!

LeledangeGraduate in reply to COVID2019

Oh wow that is the stuff dreams are made of!! Half marathon 🙈🤪 well done u that is amazing!!! Thanku so much x

Looks fine to me ! As you get fitter and stronger pace will improve though without really trying especially at your age. Most importantly thus running thing becomes a habit!

LeledangeGraduate in reply to johnm12

Try not to let it bother you. I know it bothered me too. I graduated in early June and did in about 3.8km on my final run. I’ve since made it to 5km but it still takes me about 39mins. I’m not sure if I’ve I’ll ever get faster or if I’ll just learn to run for longer! I intend to join Parkrun soon and maybe this may help my pace. Best of luck for the rest of the program 👍🏻

That’s so good!!! Motivated me for sure 🥰 we’ll done keep up the good work, I’ll let you know once I catch up with you 🙌🏾😜

Please do! You can do it for sure!

I concur with the others. Did not look at my distance before wk 8 and having failed c25k before because I ran too fast and injured myself I have learned to go for time and not focus on distance or on how many people sprint past me in the park. This is about yourself and nobody else. As others have said concentrate on the process on pacing yourself on keeping good form and on running the allotted time. You are teaching your body a new skill and you will take as long as you will take

Three years later, and I'm running 5k at an average time of 32 mins.

I'd say you're on a decent track.

I've only managed 5k under 30mins about three times, but tell myself I'm running so keeping fit and that's the important part.

LeledangeGraduate in reply to Crolla

Pleased but a bit deflated too 🤔

decided to run my usual route with just my gasps of breath and thoughts. I thought you can do this...

the end, but fingers crossed I can maintain the snail's pace for run 3 and make it through without...

Anticipating the final run was fun, doing it was fine and I even kept going for a few extra minutes.

A bit deflated,my runs are not what I thought they were :(

Doing 5K in under 30 minutes and increasing distance bit by bit. Into the groove now !

country running vest I let you know if I can get into it ? and take a photo ! Be warned !