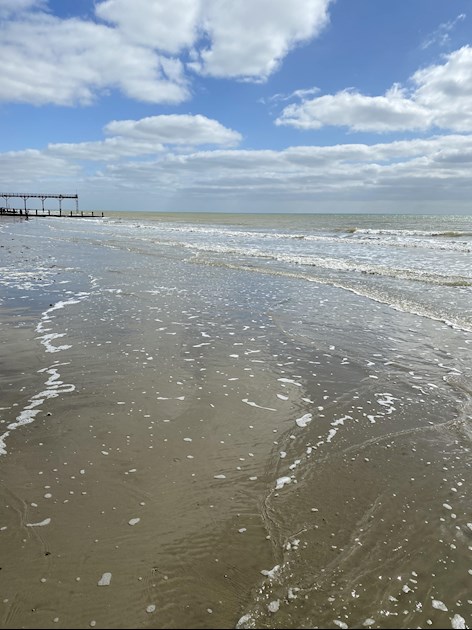 I just completed week five, run three. I ACTUALLY CAN’T BELIEVE IT! I know there’s still a long way to go; however this felt like SUCH a personal victory because I’ve been super nervous about this one since the beginning and never actually saw myself doing it. And considering I struggled with the one minute runs at the beginning I am SO HAPPY I am now doing twenty! And I actually felt like I could have gone on a bit longer too which felt amazing.

I know the programme works so well as I see everyone’s brilliant successes on here which is so inspiring! But I think today though is the first time I’ve properly FELT how great it’s working!

Thank you to everyone who gave me confidence to attempt it on here! SO excited for week six now, finally getting over any mental blocks I had about running!!

P.S a pic from my run along the beach - such beautiful weather, very lucky!

Just be mindful of week 6 runs 1 and 2 as they catch people out with going back to intervals !

Thank you so much! They absolutely did - I have now completed them but found them more difficult than expected. Particularly run two. Can’t believe I found it easier without the intervals! Pleased to have done them!

Excellent ! On to the non interval runs now 😁👍

Amazing news - well done.It’s only when you successfully complete that run you appreciate the progress you have made.

Go steady on runs 1&2 of week 6... sometimes they aren’t as friendly as they look.

Thank you so much! 💕YES! I found them so much harder than I was expecting! Took it slow and have now done week six, run one and two! Prefer without intervals now - never thought I’d say that!

I said exactly the same thing at that point too... I just realised I was ready to leave the intervals behind me and move on. Amazing how it works isn’t it?!

Congratulations Kate on completing run 3 of week 5, onwards and upwards to week 6 run 1 but be careful about that run as it catches out some people with the interval walks and runs after the non stop 20 minutes of W5R3 which you have just ran 🏃🏾

Thank you so much! I agree; found it much easier doing the 20 mins without intervals!

This is such a special run Katie - I think it’s when we really start to believe we can do this running thing!!🤣 Well done and good luck with week 6. I agree with the comments above that Week 6 catches a few out with its return to intervals - but take it steady and ignore any mental gremlins and you will be fine. You can do this! 🙂

Thank you so much! Definitely; so pleased! I love the positivity of this forum so much too. Have now completed week 6, run one and two - found them more difficult than I thought but so pleased to have done them 👏🏻

Brilliant - the rest of the runs from here on in are more straightforward and gradually build up that distance. Good luck!🙂

Well done Katie; that's your first real run under your belt. As others have commented, the walking breaks in W6R 1&2 catch a lot of us out and we really discover that it is easier to run non-stop than it is to re-start after a walking section.Don't worry too my about the 25 minute run; if you tackle it with the same mindset as W5R3 you shouldn't have any difficulty in doing it.

Meanwhile, feel pleased with yourself on today's achievement.

Thanks so much! I have just done run one and two of week six and absolutely agree! I can’t quite believe I prefer no intervals now! Harder than expected but pleased to have done them 👏🏻

Well done Katie. If you find W7 runs too much you can always go back and repeat W6R3 😊.Again well done. There no going back now.

That's the biggest mental (not physical) hurdle out of the way.

NOTHING else in the program should faze you now.

Thank you so much! These make for really interesting reads; thanks for sending them my way!

right leg, everything just worked out for me today. I thoroughly enjoyed the run, the audio...

I’ve purposely avoided reading too far on ahead

I did and I felt daunted, and it fair messed with my

best! and to those to come I hope you will be as inspired as I have been reading the comments and...

I’ve been struggling with my knees/ shin splints? 🤔 for a week now and been pushing through but...

morning I decided that I felt like I had healed and I was ready to try running again, so I got out...

This is May’s consolidation club with me MummyCav...