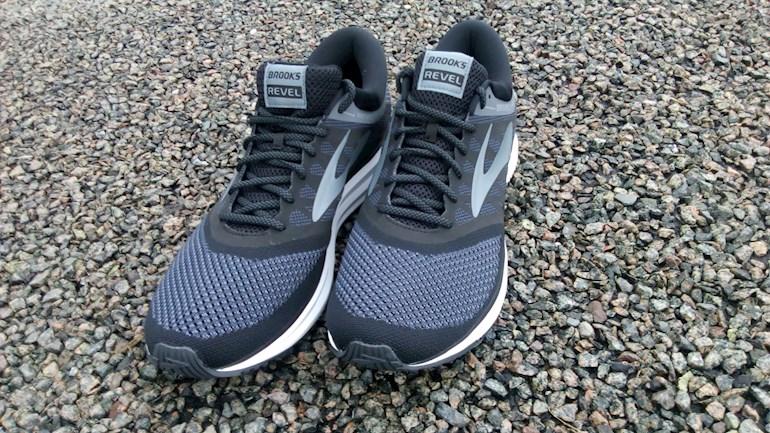 As you may be able to see from the photo, they're Brooks Revel (last year's model at a lower price). I got them mail-order from the Brooks website. Ordered Tuesday, arrived today (Thursday) from Germany. Skinflint that I am, I avoided paying £5 carriage charge by ordering an £8 three-pack of Brooks running socks to take me over the free carriage threshold. So in effect, I got three pairs of socks for £3. I'm happy.

I haven't enjoyed the recent hot weather one bit, so I'm glad it's a bit cooler now and I can get out and pound the tarmac again. Due to the heat, I only managed six runs in June and five in July. But now I'm back on my regular schedule of running every other day. I've done 22 k since 9 August, including one 8 k. I'm very slowly heading for 10 k, but not with any particular plan in mind - just as I feel able to push a bit further. The new shoes may spur me on a little! Don't ask about speed. I go slooooow. I began running and c25k last August and graduated, after a knee injury and a c25k restart, mid-December.

It was my one-year runniversary a week or so ago, so the shoes were my gift to myself and are really my first pair of proper good trainers. Why Brooks Revel? Well, I've long wanted a pair of Brooks - I've always liked the look of them. Soon after I started running I bought a copy of Runner's World magazine. In it is a shoe-buyers guide (it seems to be an annual thing that they do). You answer a few questions and it gives a range of shoes that should suit you. One of those, for me, is the Brooks Revel. Also, on the Brooks website is a similar thing that asks some questions (mostly different questions to the magazine) and comes up with the recommended Brooks shoe for you. When I did that, it recommended the Revel as well. Interestingly, it's not as if they are trying to sell the most expensive, as Revel is about the least expensive shoe that they make.

I'll be out there tomorrow, trying out the new shoes. Perhaps, when I've given them a good few k, I'll let you know how they are.

I'll be interested to find out what you think of them.

What I think about them - the report is below.

I did exactly the same as you. Went through the questions on the Brooks website and it recommended the Ghost for me. So I got last season's Ghost 10. 48 hours delivery from Germany and I get to try them out on my W3R3 tomorrow. The material at the top seems really thin though. I can almost poke my big toe through it!

Plenty of room at the front as I ordered a size bigger than normal but quite snug around the ankle which I presume is what you want - no slippage.

I would only do the gait analysis as a last resort as it's a rigmarole getting to the running shops from where I live.

Hi. Would love to know how you get on. I’m loving my Brooks glycerin 16 shoes. Will be off to get a second pair.

How I'm getting on with them - the report is below.

This is how I'm finding the Brooks Revel after using them for four runs. I've done 26 km in them ( 2 * 5 km, 1 * 7 km and 1 * 9 km). The shoes they replaced were much cheaper, they were not 'fashion style' trainers but were at least trying to be proper running shoes. I felt they were getting 'tired' and weren't supporting my feet as well as they used to and I had started getting the odd calf pain. The new Brooks, of course, immediately felt better in that they are comfortable and support the feet very well. But I suppose, when you really think about it, the mark of a good shoe is that they feel as unobtrusive as possible - they get out the way and just let you run with as much freedom as possible. In that, they certainly do the job. I haven't had any problems re. aches and pains, so hopefully they'll help keep me injury free. They seem to be made to a very high standard and give the impression that they will last a good time. I'm very happy with them and although they cost what to me is quite a lot of money, I'm confident they will give good service. Time will tell.

the box, and I put them on, and thought about them, and took them off, and put them back in the...

I've been holding off on buying a proper pair of running shoes until I was certain...

and felt ok by the end of the last run I would try to run a bit longer to a max of an extra 2 mins...