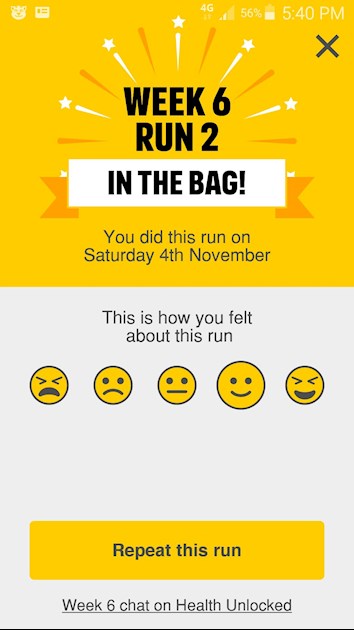 So even though I worked last night and have to work tonight too, I decided to get up this evening and head out for a run. Not that I was getting any sleep anyway from all the blowing and coughing I'm doing due to my sinuses.

Glad I went out any how. Run went well. Even managed to pick up the pace abit for the last 2 minutes.

My happiness was short lived though. I run around my local playing field. Alot of people do. Is also full of men playing football on a Saturday too. Now many people tend to take their jackets off while they run and return to it when they're finished. I myself do the same thing. A bunch of guys were playing football where I usually leave my jacket, so I left it not far away on a pole instead and off I went.

Upon my return after my 1st lap of the field, both the guys playing football and my jacket was gone.

I was soo upset I could've cried. I still had my 2nd 10 minute run to do at that point and so I did that and returned to the pole afterwards but still no jacket.

I'm not even upset about the cost of the jacket, it wasn't expensive. I was more upset because I now had to walk home a good 15 minuts walk in the cold in a sweaty top without another layer to keep me warm.

I have no doubt that one of those footballers took my jacket. It was getting dark and only the usual people over there who I recognised except for those few guys.

If they thought there was valuables in the pockets, my apologies. Only snotty tissues. So to the idiot that stole my coat, well you wouldn't like my response to your actions if I saw you face to face again.

On a positive note, another run done and dusted. Roll on Monday and the last run of week 6.

Sad about your jacket☹️ Some people are horrible. On a positive note maybe time to treat yourself to a super new one?

You're right. A proper running one that I won't have to take off. Good idea.☺

With reflective strips as go faster stripes for running on these dark winter evenings.

Really sorry to hear that about your jacket, how annoying. Sending you a sympathetic cyber hug ( & a grrr about the thief! ) Just a thought... sometimes people who steal clothes in the hope of there being valuables in the pockets quickly dump the garment over the nearest garden wall when they discover there is nothing of any value. It might be worth having a quick look nearby in case that has happened. (Not suggesting you jump over 6 foot garden fences - just thinking if there were nearby front gardens with low walls???)

Donna79 in reply to Elfe5

That area has a cluster of fields and wooded areas together. Edge of Epping forest. I did have a quick look around but darkness soon dawned upon me and I don't like being over there in the dark, so I had to accept defeat and head for home.

If the jacket was needed and they kept it, fair enough. Still not a happy bunny but I would rather it be put to good use as it was fairly new rather than being dumped.

Knowing me I'll be scanning the area in Monday during my next run but even if I found it then, not sure I would want it anymore.

You did brilliantly... and that thief will get his comeuppance!!! Take a look online for a lightweight jacket.. some good offers around.. I have a Ron Hill... always bargains if you surf the net

You are awesome.. you ran and you finished the run!

Donna79 in reply to Oldfloss

Thank you Oldfloss. You can't keep a good man down as they say. They probably gave me the extra boost that I had at the end of my run aswell. Won't complain too much as people lose much more than a jacket on a daily basis but it was just the fact that I would have to walk home cold for all to see my lumps and bumps. Lol. Will check out that link you sent. Thank you.

OldflossAdministrator in reply to Donna79

I am always looking out for bargains....and... Lidl and Aldi have some great warmer running gear for winter too !

Folk will take anything... when i taught.. somebody took a plant off my piano..whilst I was in a staff meeting.... It was in a plastic pot... I was so upset.. it was one I had had for years... my Dad grew it...he had died many years before... and the pot... tatty green plastic.. was the original one... Honestly!

Donna79 in reply to Oldfloss

It's sad what this world has turned in to. They could've simply asked you for small cut off of it if they liked it that much and then grown their own. Now these idiots this evening obviously saw me take my jacket off and then start running and so they know it wasn't a forgotten piece of clothing. Just sad.

my 8 minute run. I wasn't feeling too out of breathe and my legs weren't hurting.

again in 2 days time. I'm going to run either early morning or late evening as sun during day is...

first 25 minute run in a couple of days.

Anyway, off for a shower to get warm after my wet run....

believe I've just run for 25 mins and even managed to speed up a little for the last minute, as...

yesterday I played golf, had a good rest at home...and then got my running shorts on and went for...