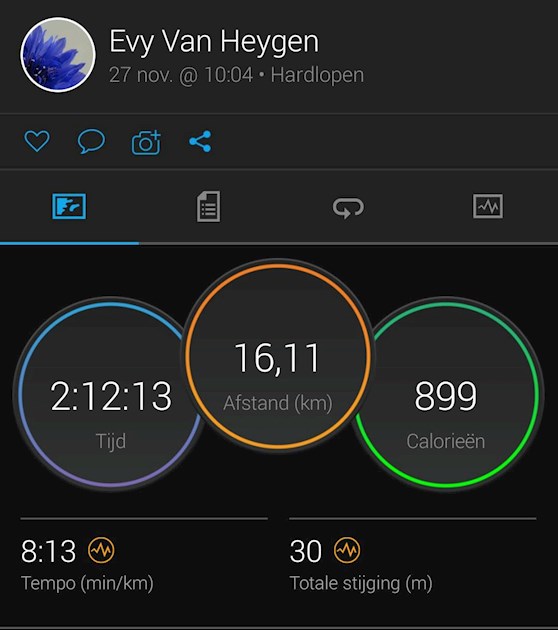 As I could not run the past week due to feeling bad (to much sugar, migraine, etc.), I thought my plan to reach 10 miles this weekend was over. But yesterday my migraine was gone, I hydrated well and I felt good. I had a good nights sleep and woke up this morning, knowing today I would try it.

It had frozen during the night, the grass was white, cars had frozen windows, etc. but the sun was shining! After what seems like weeks of perpetual grey sky, today there was sun! Was it a sign?

I waited 2 hours after breakfast, kitted up in my cold weather kit (I also have a freezing weather kit, but that is not needed yet), did some dynamic stretches and leg swings and set off.

As all my runs, this one was to be run at a Jeffing ratio of 4min30 / 0min30. I thought I started slow, but at the buzzer of 1 kilometer I saw I had started too fast. I tried slowing down, but while my normal starting pace is around 9:30, I never slipped into the 9 minutes during this run.

I planned to run first my usual 5K route, then the other 5K of my usual 10K route and then the first 5K route again with an added 1K at the end.

In general the run went good, better than my last 12K and 14K runs. Passed a rabbit, sheep, people, birds, ... . Had to watch out on a wooden bridge though, as it was very slippery. Luckily I just had a walking break there, so I could carefully scoot over it. On my second passing of the bridge the slippery layer had thawed.

I took a gel at 8K, though I have absolutely no idea if it helps or not.

At 13K I was starting to feel a tad tired in the legs and I felt myself slow. Gave myself a good kick in the brains and told myself it was only 3K more. Tried to speed up a bit again and kept going. At 15K though my ankles started to hurt badly. Not as in an injury, but just pain from overuse, an almost burning sensation.

Ate a proteïn bar on my walk back home and took a well deserved hot shower (which was definately needed - I STINK after a run). Now I am crawled up on the couch with a cat and some knitting. Taking 1 week of from running too, to let my ankles rest. Back to 10K now as my long distance. I might do another 10 miles some day, but not in the very near future I think... 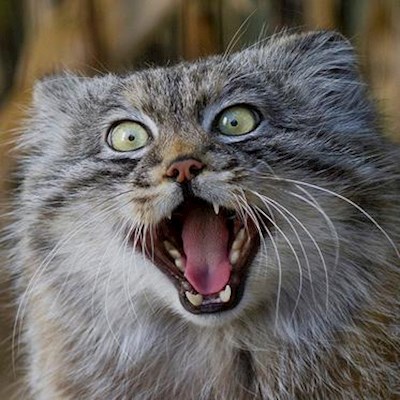 BlackScorpion
Graduate10
To view profiles and participate in discussions please or .
47 Replies
•

You just lie back and relax.

Thanks, I am definately taking a bit of relax-time!

Brilliant run for you, much quicker than my one and only ten miles in June.

BlackScorpionGraduate10 in reply to Mormor1

I am honestly also amazed at my time. I really thought I would need longer. But sometimes there are days when the stars aline and I think today was such a day...

Good to hear you are feeling better.Lovely write up and well done for keeping going to your goal distance. Wish I had your stamina! Nice bonus to smash your target time too! Congratulations.🌟

BlackScorpionGraduate10 in reply to Couchpotato101

Thanks 😸 definately enjoying my relax-time. Might even take a short nap!

Should I, should I not, can I, that run you have been telling us about for the last two weeks, finally you DID do it, a massive congratulations to you Evy on running your first 10 miles run today, well done, you should be very very proud of yourself, like you I am thinking that 10 miles is the longest distance I run, I have run 5 of them, for me also, 10K is long enough, treat yourself with something special, once again congratulations on running 10 miles 👍🏃🏾

Thanks! And yes, you are finally released of my whining about trying for 10 miles 😂.

Well done Evy !And congratulations on beating your expected time 😁

BlackScorpionGraduate10 in reply to Instructor57

Thanks and I will, feeling a bit wooden now when walking 😂

Awesome! I thought you might crack it soon. I'm very happy for you 🎉

Sounds such a beautiful day for it. Congratulations! That’s a major achievement l, which you’ve worked towards steadily and carefully. Enjoy your rest now! 💫🌟🙌

Thanks and am enjoying my rest already! ☺

Well done 👏👏👏. After midweek I thought that was you out for a wee while but you’ve came bouncing back in a great time as well, A very long way to run but pleased for you , not the snail anymore. Take a well earned rest . 👏👏⭐️⭐️

BlackScorpionGraduate10 in reply to Doris8

Thanks and I honestly thought I was done for too. But when the stars aline... Now no running until next week Sunday.

It means “you’re a star”

Well done! You've been working up to this one for a good while.

I don't think I stink after a run, but my kit is always sopping wet when I take it off, whatever the outside temperature. However, if I didn't wash it immediately it probably would turn stinky.

I said the same as you ("back to doing shorter distances now") after doing a Half Marathon distance, and somehow I've done four in total now. The distance bug gets you eventually. 🤣

Waiting to see how I feel today and tomorrow. Then I'll decide if there will be another ten miler some day. But now now... maybe I will leave winter in between.

Though at one point I was thinking that a HM is 'only' 5K more 😂. But no, now I keep it to 10K and I'll see if another ten miler happens some day.

It was nearly six months between my first ten miler and me doing a HM. Injury and a hot summer delayed it.

Ahum, in that case, I 'glow' seriously after a run 😂

Brilliant, well done 👏👏👏. Sounds like you had a lovely day for it! Enjoy your week off with the cat and your knitting - sounds like heaven 🐱🧶

Unfortunately it is only a week off from running. Still have to work 😔. But kitty 1 is still curled up against me. Kitty 2 is snoring in her basket in another room.

Thank you! Cakes for everybody! 🎂

So impressed to read this well done! You are my inspiration to go for 10 miles. You sounded very well prepared and it really paid off what an achievement!

Thanks and -blush- I don't know if I can be an inspiration. I did not exactly build up slow, haha.

Well done Evy! I'm so happy to read that you felt fit enough and the weather was good enough for this run after all. You deserve to feel properly pleased with yourself - 10k feels like a long way to me! Enjoy your well deserved rest and I hope the ankles don't complain too much.

Thanks ☺. The ankles feel better today, but my upper legs are soooore. I feel as if I did 1000 burpees! Should have taken a bath with epsom salts yesterday...

Definitely a good idea. When I did 10m I always felt soooooo tired for the rest of the day. Totally worth it though. Hope you can walk tomorrow!

Now that was strange, I did not feel tired at all. I mean, normally I take a lil nap during the day in the weekends. And on Saturday after the run, I felt energy coursing through me! Could not nap, could stay up late, etc. Really weird!

The legs are a lot less sore today!

Thanks! Luckily the slipperiness was only on that little bridge. I did also encounter mud though, chosing between thick mud and watery mud to run in can be a hard choice 😜

Congratulations on achieving ten miles Evy. Hope you enjoy your well deserved rest. Do you have any plans for what comes next?

Thanks! And no, no real pland. I am going to take it 'easy' for a while, going back to 5K runs on weekdays and 10K in the weekend, trying to have 2 to 3 runs a week. Might go for another ten miler in the future, but can't predict when yet.

Wow congratulations 🎊🤩 sorry I'm a bit late as I'm playing forum catch up !It certainly sounds like you had a great run with the sun shining to make it even more special.

Thanks and yes, the ankles were feeling better already the day after. Don't think though I had to do another ten miler yesterday, haha.

Yay 😃👏👍😎 Congratulations and so so so well done!

mid-week run 🙃. So, as runs this weekend count to VRWC, I thought I'd try for 10 miles. Easier

The jelly babies are a winner! First 10 miles 🏃‍♀️

avoid running when it gets too warm. I made a really conscious effort to run slowly and pace...

quicker, even though I wasn't really trying. (By this point I was running a 9.30 m/mile for the run...

it slow.. first 3K in and I started settling in.. felt my pace was nice and comfortable, started...

increasing my long run by a mile a week. Today I was excited about running 10 miles for the first...