So I gave Roseabi’s half marathon plan a go but pulled out after finding the 12k run a real struggle, seeing the distances ramp up, and not really enjoying the non-“just running” parts (which I know I really should be doing). It’s a great programme but I’m not just not ready for it yet.

But I do need a plan/focus/target to work towards.

In the new (February) Runner’s World there is a fantastic little booklet and it talks about “base running”, 5 running days which support a longer weekend run. As I only run 3 times a week, 6 seems quite the leap. But 5 across 7 days might be doable?

For a 10k long run that means a couple of 5k runs and a couple of 2.5k runs. Based on my regular pattern that would be adding the two 2.5k.

Doing that in week one would break the 10% rule...so the first week would need just 4 runs.

Going forward, my current interim goal is to run 16k/10 miles. I figure increasing the long run by 1k every week or every second week would work. This increases the total each week by 2.5k, exactly 10% moving from 10k to 11k and then under 10% each subsequent week.

Broken down into a plan it would start like this (taken in a “sensible” order):

From then on it would depend how well the long run had gone. Well? Push on to the next week. Difficult? Stay on that week. Really hard? Consider dropping back a week.

Subsequent weeks would be:

You will notice no intervals or strength exercises in there. Of course they are important and of course I will be doing them*.

It would mean consecutive running, probably a two day and a three day streak. And the order of the runs and running days could mix about to fit in with work etc. And one of the middle runs could be a parkrun plus a little before or after added on.

How does that look?

Enjoy your next run, whatever it is x 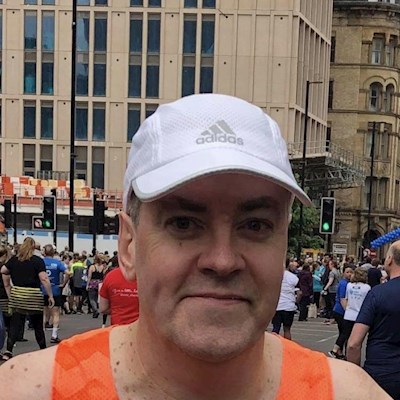 Jay66UK
Graduate10
To view profiles and participate in discussions please or .
20 Replies
•

That looks really well thought through Jay, good stuff! I like the thinking behind how you build the runs up too.

For me I've not worried about the 10% per week rule too much, I tend to do a new distance, consolidate it, then after a few weeks, extend it by a bit more. I'm probably jumping from 15k to 17.5k soon which will technically be slightly more than 10%, but fits in really nicely with a route I've planned. Also, that 17.5k will be without too many insane hills, so I won't be doing it round Lyme Park, for example

Speaking of which... I ran through there this morning, as I have a running route which takes me up from the Macclesfield canal into Lyme. Good grief, felt like it was nearly vertical! I thought of you as always

Lyme Park is a special route! I’m volunteering there for the first time tomorrow.

As for the 10% rule, I believe it’s your whole week of running not just your long run, so a bigger jump like you describe isn’t a problem as long as the difference is not more than 10% of the total distance you ran the previous week.

Enjoy the next one!

Well done on the volunteering, that's brilliant. So... fancy a Lyme Park parkrun as a runner sometime?

Hi Neil. Only just seen this sorry. I’m not sure when I’ll get back to LP for a park run - it’s flipping hard!

I know, it is hard! I did the run up from the Macclesfield canal at Higher Poynton to Lyme, and it's really really steep! The parkrun route isn't quite so bad though... the real reason is of course that I want to read one of your wonderful run reports about it again

Will give it my best shot. Have a great year x 🦋

Looks like you’ve got it sussed Jay!! 16k is a fantastic distance too! ❤️

I like a man with a plan! Good luck with it and a Happy New Year to you and your family. 🎆

This sounds mighty interesting 🤔🤔🤔 I might be tempted by this plan myself...Happy NYE, Jay! x

Well, if you do, let me know how it goes. The risk is the consecutive runs but I figure if the middle of the triple and one of the pair are the shortest run it perhaps won’t be tooooo much?

Enjoy your next run x

I’m laughing though, as I think you’ll be doing more running than my personal version of Abi’s HM plan! 😂❤️

I’m more worried about getting injured by having no rest day between runs for now, so I only run 3 times a week. Due to other health issues over the last couple of weeks, I’ve mainly only been able to walk as my other exercise. And as I started at 15k long runs, I’m only increasing my long run by 1k per week at most, and after studying the details of Abi’s plan I’m cycling the long run back to 10k about every 3-4 weeks. ⭐️

I hope using that adapted version will have me running 18k tomorrow, and up to the HM 21.1k distance before too long. I hope to then remain HM ready by cycling the slow long run around a bit (and by continuing to drop it back to only 10k at least every 4th week). My other 2 runs will usually be a 5k Tempo Parkrun, and a slow easy run of 5 to 10k, which I will also vary around a bit, and which I like to add short 6 x 60m “strides” to the end of as added speedwork. 😊

I guess my point is that I don’t think you need to feel you have to start running more days per week unless you really want to, and walking will probably “do” as cross training if you really hate doing everything else...😊

And Abi’s plan can be used as a variable length plan with a suggested format to be adapted to help get you up to HM distance. 😊❤️

For those wanting to run a HM race in March, the distances may need ramping up faster. But if you’ve longer time available then repeating long run distances won’t be a problem anyway. And cycling back down to a shorter long run every few weeks seems an important feature, which I’m hoping will keep this plan as more of an ongoing one for me. (I never intend to run beyond HM distances.) 😊

So maybe you’ve not really left our HM group at all, Jay, as we’re all following different versions. 😃❤️❤️

That plan looks mighty impressive Jay, if anyone can do it you can. 🙂

Hi Jay, that seems a well thought out plan and it has some built-in flexibility too.👍🏃‍♂️

I reckon it’s achievable and I’m sure you’ll give it your best shot, so good luck with everything.🙂

I must look at her plan. 12k is my furthest run to date but I’m aiming for HM this year x

It’s a really good one, Flick. Very flexible. I’ll definitely use it when I’m ready for HM distance.

Well done Jay - I’m finding myself needing to make a decision abt the HM plan too. Haven’t been training so much due to life stuff.

Well done on finding an alternative - I need to make a call v.soon

It’s a big commitment, isn’t it? One of my key wants/needs is to avoid injury and I could see the pace of the programme was simply too much for me.

I remain pretty unfit (despite being able to run 10k) and I’m still carrying nearly two and a half stone “extra timber”, despite losing that much already over the year.

There is no shame for me in trying something and learning something from that experience and adjusting your plans as a consequence.

The Buddhist inside me thinks about clinging on to things and how this brings on suffering, and knows that holding things more lightly avoids “rope burn” - the extra pain you create for yourself when you try to hold something too tightly.

Make your decision and be happy with it. It is a decision “for now” to continue or not. It is a decision you have total control over to review or revisit as you choose so it should be an easy one to take. There are no really bad consequences of either path, but easing back has the benefit of reducing injury risk (depending what you do instead).

Let me know what you choose when you make a choice and wishing you injury free running this year.

Enjoy your next run x

in week 11 with one week to go before my first HM in Newcastle. It incorporates short runs, long...

My new training plan - something new/old.

So the plan is I'm cutting my running back to 3km short runs but every other day first...

for a 10K but I've looked everywhere and I can't find it I'm not the fastest runner I enjoy long...

I have been for a run about 2 weeks ago and then ran twice this week. My stamina is definitely not...

another 10k plan that you can join 🏅

We will be running a 6 week plan that can either get you to...