First ever 12.5k with planned photo pauses - Bridge to 10K 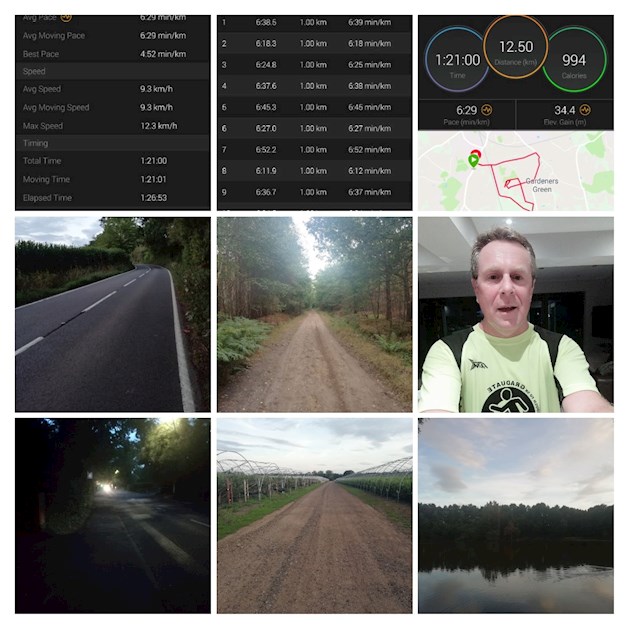 Been thinking about this for a while, had always thought that to count a run, it had to be non stop but I see many better runners than me posting runs and talking about stops for photos, drinks, toilet breaks, whatever, so I thought I would see what it was like to do this. Set out to do 10k at least but planned from the outset to take a photo every 2.5k. I did that and managed 12.5k and more to the point really enjoyed it. I got lost in the woods once, only to emerge into the local PYO fruit farm and got lost in there too! Apart from that, it was great! The running time was 1:21and the elapsed time 1:26, pretty pleased with that too

How fantastic - we’ll done😀 Like you I feel a run had to be non stop and it has been a bit of a revalation that we can stop every now and again. Well done again!

Thanks PaulBrad it really helped to keep me going, and massively added to the fun which is so important, isn't it Fabulous450

BerksroverGraduate10 in reply to Fabulous450

I am definitely a convert to the photo stop AND the running is fun club, throw in a personal best for distance and I am feeling good about running again now

That’s a really good time! 👍 The run/stop/walk/stretch/run routine works really well for me on my long runs. I enjoy the them more this way. It just takes the pressure off. Nice one 👍😃

That’s brilliant Steve! Longer runs should be enjoyable and stopping for a few moments here and there for pics even better. There will also be those runs you won’t stop in and that’s a different kind of enjoyable run! It’s lovely not to worry about time and pace. 🙌🏼😬

Thanks Alka, between you and Fabulous450 I think I am beginning to see the light, as you say there will be days when I will want to run non-stop, but the fun factor was definitely high last night and the Garmin pace alerts are proving a massive help in slowing my pace a little which is what I have been trying to do on the longer runs

Brilliant! For ordinary runs, why not - although I have stopped in a race a time or two as well, after all, I'm never going to be first and my only aim is to finish and get the bling

What a fantastic run! It takes a while for the penny to drop that stopping now and again is not failing! It just means you can run further and really enjoy it, to boot! It has only since I have started running 10k + that I have realised this, but I think that as we become more experienced runners we realise we can, to a certain degree, make up our own rules! Good work! x

Thanks Sadie, it is liberating! Having watched athletics for years, running has become synonymous with speed and competition etc. Takes a little while to 'unlearn' that and realise it can be fun

Well done, and that’s a brilliant time too, Steve! 👍❤️🏃‍♂️

The first time I quickly stopped to take photos I was worried I was doing everything wrong. (I still fumble around getting my phone in and out of my waist belt while still running, which I suspect just makes things slower than if I stopped more than 1 sec to focus the shot!😂) I’ve noticed during Parkrun, though, that I keep determinedly running, while some runners finish ahead of me who stop to walk and get their breathe back, then restart running much faster than me each time. I guess everyone knows what works best for them, and run/walking is a style all of its own.

Great to get this one under your belt before the India trip! Are you going to pick HM training next then? 😊❤️

Hi, I know what you mean about phone fumbling, mine wad in an arm holster lol, and I haven't given up on non stop running either, but nothing wrong with a bit if nix and match. Ad for the HM, well we alk need a target don't wr, so I think a bit if research is in order on that front!

I think I have achieved more on a parkrun by running it all the way round than if I have gone out too fast and have to walk and catch my breath. So I’d rather have a slower time . I was manning the halfway cone today and had my plastic clackers .

Ooo..plastic clackers sound great! I’m going to try to get a tambourine once I’m up to 10K and getting some volunteering done! 😊❤️

That's brilliant! I too, tend to feel I mustn't stop but I think it's a throwback to thinking we'll need to walk and not carry on again. In reality we're well past that stage.

Starting to run again after a stop was what I was most worried about, but it wasn't a problem, I think I was just determined to do it last night so kept the gremlins well at bay.

I think part of the not wanting to stop is a hangup from the C25k and emphasis on 30 minutes non stop, so walking or taking a short break feels like failure. It was only when I joined a running group I learnt its okay to stop and take the pressure off me

Thanks LittleNell83 it does take a bit of getting used to, and ad I planned to do it, I didn't see it as failure, just a different way of doing things 😁

Please tell me you broke into one or two of the polytunnels and gorged on fruit tho.... xx

It was tempting, but I am a good boy 😉

Just to add a cautionary word. I was firmly in the no stopping camp. I ran to 15k without stopping at the furthest. But then looking to go longer and as I started taking the phone so I could take pictures I then started stopping to do exactly that, then sometimes for a stretch or sometimes just to recover the breath or because the gremlins said so. That was great it meant I could go further and further, but soon I felt like I couldn't do 10k without stopping because I had now programmed in stopping when it got a bit hard, it even got to the point I felt I couldn't do 2k without stopping, though in hindisght that was probably coping with fatigue/injury. Just just be careful with the stopping if you want to run races also and care about the times. Saying that my last 10k race in July I had to stop because of the heat a couple of times after 7k and ended up a bit stop start to the finish. I still did it in close to the hour so it wasn't really any slower than normal and it was 29-30c

Thanks, will take that on board, for the next few weeks I am going to be largely treadmill bound so I won't be stopping during those runs. The big difference for me last night, was that I planned to stop but I can imagine that it could become a problem for races /PB's etc. if I always do that

A great run Steve. I also stopped to take a pic today which I haven't really done before as I felt it was cheating somehow. Think it's from c25k when you have the coaches saying whatever you do just keep going...because you're learning and you think you can't run continuously. But now you can...And really far...And pretty fast so nothing wrong with pausing to take in the scenery for a second is there?!

That’s really good to know Berksrover - I’d always assumed it had to be non-stop unless there was an emergency... great pics too by the way. 😁👍

My first ever 10k and it wasnt even planned!

climbs into my runs so I'm guessing this is a good thing to keep up too? In today's run I even went...

back to enjoying running doing a super slow jog and even pace.

Was so pleased when I got back,...

First day of a new plan

coach is not too ‘girly’ which is great, but I thought I’d set it to a male voice, and I only got...

first half marathon ever

great north run. It was a little on the hot side and was a tough race. I wasn't used to running...

we have decided to pause the plan for a week and see where we go from there, we will still go out,...