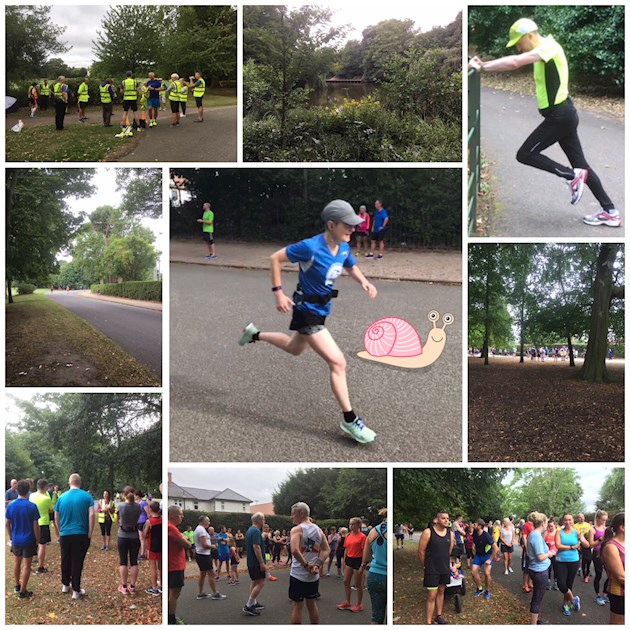 Decided to go to “Runners Need” within our local Snow+Rock store yesterday for gait analysis. It seemed the sensible thing to do. I’d started C25k determined to put as little impact on my fused neck as possible, and was trying to forefoot strike, with the heel just touching down briefly afterwards. But I’d no idea if that was really working, or what type of running shoes I should be wearing...

The lady in the shop was lovely, and turned out to be a rock climber, so we’d that in common. Once I explained I’d only just started running in April, she started by telling me what foot and ankle exercises to do (I wasn’t expecting exercise advice!), then examined and measured my bare feet. Sticking me in a pair of their neutral shoes, she then left me in control of the treadmill to walk for a bit, then to turn it up myself so I was running slowly while she filmed from behind.

Watching the film with her I was in for a bit of a surprise, as my feet were going all over the place!! She said she didn’t come across many forefoot strikers, but that I seemed to be slightly turning out one knee, and managing to land on the outside of both forefeet, then rolling along the outside of both feet before touching with my heels! She then proceeded to film me fast walking instead, which she declared perfect, and recommended I do plenty of mindful power walking alongside my running to try to improve my running gait - aiming to have both feet facing exactly forward and to land in the middle of my forefoot.

I was very impressed with the service, even if I wasn’t with my gait! 🙄 The lady said neutral shoes should be fine, but no shoe was going to fix my issues - and it wasn’t surprising running on uneven surfaces was causing my knees to twist awkwardly, as I was currently putting a lot of strain on them. The only reasonably priced neutral shoes they had weren’t stocked in my size, so no hard sell either. (I’ve since ordered FIVE pairs of neutral Brooks & Asics from online sales, including a pair from the Runners Need website, but have promised my husband most will go back once I’ve decided what size / style are most comfortable!!! 😏 )

So onto today’s Birkenhead Parkrun. Pleasantly overcast, lots of cheerful volunteers as usual, a few less runners than normal, probably due to holiday season, and a super speedy husband who ended up doing his first sub-22min time!!! 😳

As for me, I was so glad I’d invited Oldfloss along to join me again. I needed her calm voice of reason to keep me going! After yesterday’s gait analysis I was left completely bamboozled over what to do with my feet, and thought I might fall over at the start line! 😂😂 We carefully picked our way along the first half k, with me looking down at everyone else’s feet, and trying to workout what they were doing! Some feet were really drastically flying all over the place, so I decided not to copy those...😟

A speedy couple with a stroller came flying past, by which time I’d tried about 5 different gait styles and was half tempted to climb aboard for a lift...(the elderly gentleman speeding past on his mobility scooter on our 3rd lap of the park had an even more inviting looking basket on the front!😂) By the final lap, I seemed to be adopting a sort of “don’t really land on your forefoot at all” approach, which seemed to work for the flat and uphill, followed by forefoot striking for the downhill. I was just relieved I’d still not tripped myself up.😆😆

Slightly disappointed that no one was close enough in front to chase them in for a final sprint, but YAAAY...loud footsteps coming up fast from behind provided a new target! 👍 I think he was a bit surprised when we then shot off too. He didn’t catch us, and I think Oldfloss had now escaped from my phone case and slipped in over the finishing line first! 😃😃😃🏃‍♀️🐌❤️

So I’m supposed to run 7k on Monday. The Runners World calculator tells me I need to slow down to much slower than my race pace, but I’ve no idea what I’m going to decide to do with my feet yet! 😂🤣😂👣❤️ 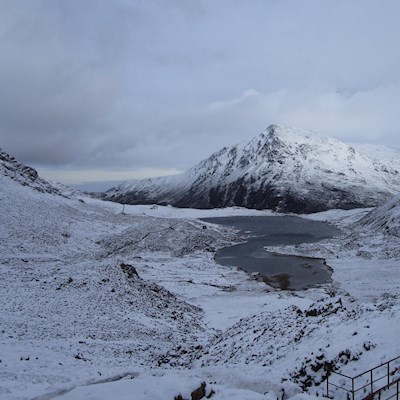 mountaindreamer
Graduate10
To view profiles and participate in discussions please or .
Read more about...
19 Replies
•

Great post. Interesting reading about your journey to get your gait right. It's odd that they only had you running slowly on the treadmill though as your foot strike can change quite a lot as you speed up.

I watched someone at the gym the other day(i'm now fascinated watching how other people run) who was forefoot striking and doing the bicycle movement but very slowly, they may have been practicing but it did look freaky. It did make me wonder whether they were running effectively though as I have read you are meant to lift the toes up to pre flex the achilles to save over extension and loss in power. They talk about it at the end of this video I found yesterday and I posted on empens post youtu.be/wQx-0ZByhWA

Just re-watched to get the term dorsiflexion of the ankle.. cool stuff

Thanks - I’ll check that out. The lady in the shop was stressing to me that I need to do plenty of Achilles stretches generally, as fore foot striking shortens the tendon.

I’m mainly trying to do it to reduce impact up my spine. I watch some people appearing to just land mid foot rather than heel striking first, but I find that difficult to do without slamming my whole foot on the floor - which results in worse impact than heel striking. I seemed to start doing it naturally for a bit today, but can’t really workout how in order to replicate it yet! I oddly find fore foot striking much easier downhill (when impact up the spine is worst).

I got exercises with my gait analysis too. It’s good when you get someone experienced and who loved running. And you may do all sorts of things with your feet but you certainly look the business. .ove the photos x

Thanks Flick! I think my feet are more controlled when running faster to finish - it’s the normal running speed bits I struggle more with! 😂

That video pinkaardvark shared above is really good, though. I can clearly see at least one big thing I’m doing wrong normally (and yes, pink, it’s the lifting your toes up before striking with the ball of your foot - my feet normally waggle out semi pointed, which probably doesn’t help me land very centrally!)

Monday’s 7k should be a good test for me, as Runners World recommended training paces mean I need to try to slow down to 7 to 8min/km. I normally do about 5.30 to 6min/km, so am expecting it to feel weird, but it will give me time to think about my feet more.

Great pics! All the info about foot striking is interesting. Your tale of the foot watching parkrun is entertaining too! I’m sure you will get it all figured out.

mountaindreamerGraduate10 in reply to Lavender1962

Thanks! I’ve told Juju I’m going to dance this week’s 7k instead! 😂❤️

Five pairs eh? Surely you could keep 2... one for when the others are wet? 😉

I'm sure you'll be able to find a more manageable gait in time. I find it helps to concentrate on feeling my feet as they land when mine starts to flail.

Either way you're making fantastic progress, don't let anything take that away 👍💪😁

Thanks Jojo. ❤️ I still find it surprising that the idea of running 7k on Monday isn’t terrifying me, whatever my feet decide to do! 😆

I’m not committing to saying how many pairs of those running shoes will be kept yet...(though 2 are just repeats of one style in 2 sizes to try out)...my Mum taught me to always hunt out a good bargain! 😃❤️

If you need more options Start Fitness have a shoe sale on!! Big names... little prices! 😁😉

Noooo....don’t let me find any more! My husband will kill me! He’s there doing a sub 22 min Parkrun in the shoes he bought years ago! 😆

I may just have to take a quick peek though...😂😂

It sounds like your gait analysis has created more problems than it’s solved, but I like the idea of all those shoes arriving. Just for info my Brooks are size 6.5 whereas my normal shoes are 5.5 - 6.

I did wonder about Brooks sizes. The lady in the shop insisted I was a 5.5 on my bigger foot, but my current Adidas ones are a 6. If they all come up too small then they may all be going back...

I was told you need a finger width in front of your longest toe. I ended up with wide too. Brooks return policy Is great. You can run down the street and still return them, not just wear them walking in the house.

The 3 Brooks pairs are coming from Runners Need and Sportpursuit web sales, so I guess the returns policy is up to them. If the Runners Need one’s are too small they’re being delivered to store, so I’ll not leave with them! The Sportpursuit ones are one style in 5.5 and 6, so I’ll post both back if too small.

I’ve just received my 2 ASICS gel pairs, and they seem long enough at 5.5. I’m lying down wearing one pair right now! Why is it the dearer pair feel more comfy...🙄😂

Yes, i went for the more expensive choice too. It’s good that you can try some of the shoes in the shop because they will lace them all up properly and see you running in them. If you look at the brooks website, I think it says that if you have problems with a shop operating their 30 day guarantee to contact them direct, Peggy57 got a lovely new pair. Have fun 👟👟👟👟👟🏃‍♀️

How did I miss this??? Superb...absolutely...and look at you..flying feet...Do you know how folk long for one of those photos??? Took me over two years before I got mine !!!

You look amazing..and I only slipped over the line first because you had carried me..😙

You look so fit and full of energy..you are going to love 7K...

Huge well done..and thank you for taking you with me..it was absolutely fantastic😊xxx

Glad you liked the photo. The trick to getting action shots seems to be to leave my husband to do short videos on his iPhone, then I can go through frame by frame later to see which shot looks best! 😂😂

Your snail character is the star in one of my children’s picture books. She never had a name other than Miss Snail, but in our house she is now fondly known as Oldfloss 😊❤️

Gait analysis: not an exact science?

expensive pair after the analysis. Can anyone tell me of their experience of gait analysis and what...

I'm off for a gait analysis on Friday... do I need to take my battered old Nikes to wear on the...

11:30 today I have my gait analysis booked in... Not looking forward to running on a treadmill in a...

I reviewed my gait, and all is good. Shoes, absolute no no, tut tut ‼️ So new shoes tried, and...