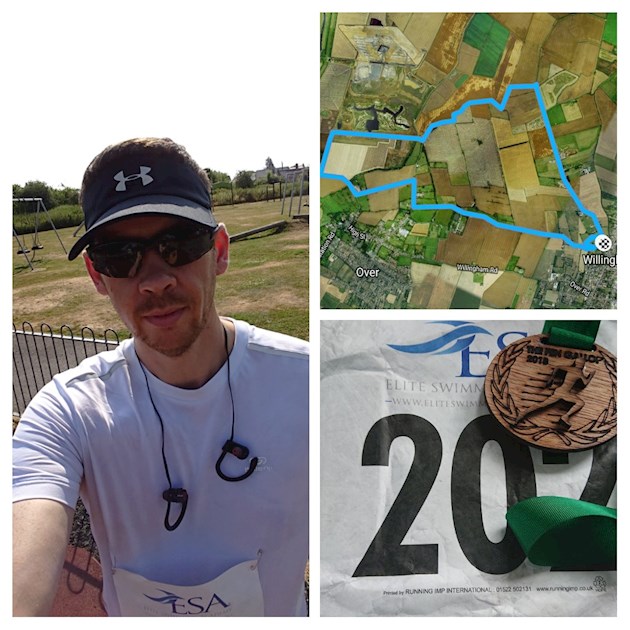 Managed my fourth 10k event in Willingham a small fenland town near Cambridge.

I wasn't looking forward to this because of the heat and the start time being 10:20 so largely at max temps. It was the sort of hot that you felt yourself burning within minutes of standing still. But lots of other people managed it so it just shows that it's all point of view/preparation/experience.

The race is described as a trail event as it does have some through woods sections and field edges but most of it I'd say was drove road and quarry Roads, as it skirts a. Quarry that is being converted to a rspb site over time. Did I say it was hot?

The first 5k were OK including what they had described in the briefing as the rollercoaster of doom(1km of quarry Road with deep lorry ruts making it very up and down) but after that I decided the heat was taking the enjoyment out of it and there was little shade to be had. So I just had 3 or 4 30sec walk breaks to help control things.

I finished an 1.01:56 but had forgotten to stop the watch as usual so I think the chip time will be a little lower. A time considering the heat and unpleasantness of it I can live with. The course was incredibly flat ignoring the rollercoaster lol so I will go back when it's cooler and run it myself as its very local.

I didn't see Madge50 so hope you had a good time and didnt find the heat as hard.

Im not sure whether to avoid such heat for races or accept it as a future challenge... 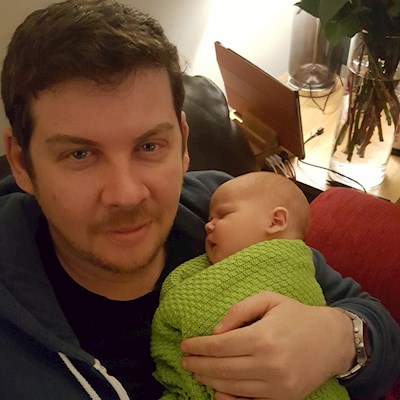 pinkaardvark
Graduate10
To view profiles and participate in discussions please or .
36 Replies
•

Great run mate in the conditions

Fab run Pinkaardvark! Great run,time and super bling!👏👏👏👏🏃‍♂️🏃‍♂️I’m such a dork though I thought it was a cycle race you were taking part in. Don’t know where that came from🤔

Don't do much cycling thankfully as the gear looks ludicrous hehe.

Trust me! Apologies must be the heat and of course the excitement of the BTC !we missed you this morning.😀😀

You are just a machine.👍

That’s a compliment now 🤔.If it is good enough a description for one of England’s footballer’s wives, by her husband, on National BBC television, having delivered there third daughter, then what of us males got to complain about.

Hope you are good and your training going well.💥🏃‍♂️💥

Thanks Bob. Considering this week a break week ie reduced mileage as no long run so will repeat next week I think.

Great run and excellent time. I felt close to collapse after mowing the lawn today so much respect for finishing a race in this heat 👍

Fab run. How people are managing to run in this what is behind me. Well done x

The chap who won it, came in in 36mins. So clearly it's doable 😳

Hey, hey hey! Well that was toasty wasn’t it! I did look out for you, but there are a lot of ‘tall, handsome’ fellas about 😉, at these things, sporting a variety of hats and visors.....

OH got under the hour, hopefully, 59.00 on his watch and like you forgot to stop it. I got 1hr 15 on my watch, but again, started early (I was at the back) and forgot to stop it until after i’d collected the medal - they’re great aren’t they, hand made, different - so hopefully around 1:13, which I’d be really happy with. I was quite ok, up to 4K - 5k or so, then had some walk breaks - did a 10k last Sunday that was a killer, across fields, most of it in direct sun, I had to walk a fair bit, this was better - I also made the mistake last week of not carrying jelly babies.....🤦‍♀️, today, I had jelly babies and dextrose tabs (just in case) , and my fluid bottles had rehydration fluid in, as well as taking advantage of all the water stations.....(more for a dousing than anything else!)

Well done, that was tough in the heat!

Chrisj31 in reply to Madge50

Madge50Graduate10 in reply to Chrisj31

It’s interesting that you’ve often said running motivation Is fragile for you, as I would consider you to be one of the most serious and dedicated people on the forum. I wonder if you, like me, have begun to find that the motivation has increased and runs are becoming the norm and something missed if you’re unable to run for some reason. Anyway, brilliant run.

Thankyou flick. It's really all about motivation for me given not too long ago I never ran nor went to the gym. I still don't feel like a runner and at these events I feel a bit sheepish amongst all the serious looking folks. I also have a history of throwing myself into things and then getting bored after 6 months hehe but have been running for 9 here's hoping. I do however find it easier to approach runs and worry less about completing them or getting a good time and run by run im proving to myself that maybe I can do it. Heres hoping if I ever run a marathon I will stop feeling like a fraud but I doubt it somehow lol

I know what you mean. Ive been running for nine months too. I think I would have given up by now if I was going to. But I dread being ill or injured: I no longer get the it would be easier to stay in and relax feeling when I’m due to run, but I’m scared to death that it would creep back in if I were to become grounded for any reason.

As for your marathon aspirations, there is no doubt in my mind that you will do one. You, like me, thrive on enthusiasm.

This really sung to me. Likewise I fear getting ill or having to miss runs. I also thrive on enthusiasm, although have never thought of it that way and love your description, spot on! You are very wise dear Flick 🙌😘

that's very kind - but dont listen to me too much or you will end up with a drawer full of lycra and a bank balance to match!!!

Well done! I enjoy reading your posts and hope I'll be doing 10k one day if I persevere with JuJu's plan. I'm a web footed, hill avoiding fenlander living in the Cotswolds with hills. Am finding that it helps me to do all the longer runs on the flat (not easy). Maybe I should think about a 10k in Cambs when the time comes.

I live in the Cotswolds with hills too and it’s a blessing in disguise. We will endure when flat landers are giving up, it’s a case of what doesn’t kill you makes you stronger 😂 whereabouts are you, if you don’t mind me asking.

I'm near Cirencester/Stroud & live 600ft above sea level! There are flat stretches near me but mostly undulating so there is no option but to confront the hilly demons! I've been doing longer runs down in the valley just to make sure I actually finish them. I do think your surroundings can have an effect on you in your early years as I have a completely different cadence to my (Yorkshire) hubby when cycling & even when riding & the horse is doing most of the work I find hills a drag. Or perhaps I'm just lazy...?! 😁

Ah, you may be right. When I last ran, a lifetime ago, it was in my teens when we lived in Herefordshire, so hills there - though I only lived there for a year or so. I ran and rode in the hills, cycled too. So now, living in the highest town in the Cotswolds, Chipping Norton, I see the hills as familiar I guess. I hated them to begin with, but there was no choice so I had to get on with it. Nearly killed me in the first few weeks of c25k, there being no flat ground anywhere, but now I honestly find it easier to keep running than to walk up them. They have certainly given me endurance as I can run for nearly two hours without stopping or walking, albeit slowly.

You've done so well - hope I can match your endurance! I agree with running up the hills, I just go really slowly, almost a walking speed!

I go up slowly too. I don’t know about endurance, I wish I was faster!

Well done pink; excellent time and nice bling too! It’s beyond me how anyone can run 10k in 36mins, let alone in this heat. Bonkersness! Just achieving it is a major plus so well done you !🏅👍👏🏻🏃🏻‍♂️🏅

I live in Ely

didn't know there was a local event.

pinkaardvarkGraduate10 in reply to Chrisj31

There's lots including the ely ultra/marathon/hm and littleport 10k to name a few.

Madge50Graduate10 in reply to Chrisj31

7 mid September. I had been gardening, on my knees a lot for long periods of time. My knees were...

next to a fairly busy road.

The next 1K was on a road that had been closed so we had a bit more...

forwarded in my mind to the next time I’ll be here - a couple of weeks’ time for my HM distance...

muttering to myself that I don't ever have to do another race if I don't want to ,ever ever! 😬My...