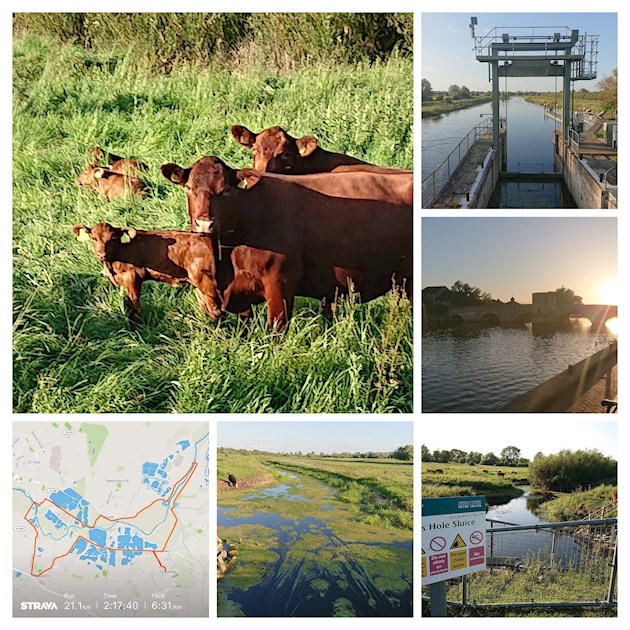 Had decided to do a longer run tonight as it has been a while since I went more than 10/11k and I need to start building up for the HM i have in October, so had planned to go out and do 12 but really desired to do 15 which is the longest run I did back at the start of April. As per usual time started to evaporate and my will to go out started to dissipate with it, storm Hector had barely touched cambridge and the sun had returned in full force by 6pm.

I dallied and I dithered until gone 7 getting grumpier and getting snappy at my good lady pink. But on went the fujirados, and the squishy water bottle was filled and a sports gel was deposited in my runners fanny pack alongside phone and emergency tenner, ipod, hankies and racing safety pins :).

I had vowed to flick the other day to do some noodling around on my next run so had looked briefly online at byways and bridleways along the river ouse that I could follow.

The thing about byways, although you may have right of way there is no guarantee their is a path, no guarantee it is used by others and not overgrown, and no guarantee that it is even navigable, above the flood table or even just free of cattle blocking the way. So yes I experienced all of the afore mentioned, I followed a fen drove for 3k before I ran into a cow field which was a muddy morass, then once escaped I ran into the cows who were quite intimidating as they had young calves so were being quite protective. Ju-ju would not have been please I suspect.

But those obstacles passed I made my way to the next town and found a bridge over the Ouse and turned round heading for the first of two old ferry boat inn's (the chain ferry's both gone long ago). This is where I discovered that although I was running on a marked route (the ouse valley way) it seems I was the only one to occasion this way in some time, so the grass was knee high and the path was just a suggestion and worse it was also most full of nettles, so the next 6km involved running through nettles trying to find footing in deep grass. I took delight in the beauty of the less trodden path though, the fast flash of electric blue dragon flies disturbed in my wake, the startled green flash of two woodpeckers I disturbed and the country sounds of shotgun and lowing cattle. It almost made up for the legs now full of stings.

So through deep grass and weed, across water meadow and river bank, through clouds of midge and dappled sunlight I ran until I reached the edge of St Ives. Here I decided to run to the centre and cross the ouse once more at the old city bridge, rebuilt after Cromwells New Model Army smashed it so long ago. The chap went to school here and lived here and at Ely nearby so you would have thought he'd have had more respect. A proto tory I reckon.

It seemed strange running past bars full of din and people picnicking at the embankment but once over the bridge and along the ancient aquaduct I was making my way back out of town and towards the village of Fenstanton, famed as the manor once owned by Capability Brown but never landscaped by him due to him having his hand full of the gentries estates to tend his own, Still lovely mind but just a blur as I made my way back to lakelands of Fen Drayton and the paths through the meres to my home.

An unexpected and unplanned HM, not fast due to the terrain and lack of planning but so pleased to have conquered it and glad of the warm bath that awaited me. Not that I deserved it after the foul mood I left in.

So noodling I did go Flick, I think it may have even been a super noodle(groan).

That sounds lovely - apart from the nettles 😃

I love meandering, and seeing where my legs take me. You lose track of time though and then it’s a long way home 🙂👍🏃‍♂️

So, thats the HM distance sorted! 🙂

Well done Mike, I think that’s a very respectable time considering. I’d be happy with that on the roads....now go get your well deserved badge 🤗

Now that's some serious noodling! FlickM3 will be so proud of you. Think of it as a great trail run, and now you know you can run a HM, in a time I'd be proud to call my own especially given the challenges of the terrain. I imagine the mood improved as the run progressed as well and I'm sure your good lady pink was pleased for the peace and quiet for a few hours and the happier hubby on his return 😉😁

Thanks. I think the noodling is what made it possible. Having to adjust pace to deal with the terrain and the stoppages to check the map on phone etc all help to control the pace. I struggle to find a long run gear at time and end up running at 5k pace so the new terrain and sights both controlled and fuelled my spirit during the run.

OMiGods!!! what a run and what a description: one of the best bits of descriptive writing I've seen (and I'm a writer, so I should know!) I now have half marathon envy

Be careful of cows, young Mike, especially if they have babies: people have been killed or badly injured by them. I used to be very blasé about navigating fields of cows, but there are many warnings now. Though I suspect you are fast enough to outrun them.

Well ... that was incredibly interesting and informative, and a great set of photos too

Hehe thanks flick. At one point a young bullock was blocking the dyke completely within hands reach of me and I had to decide whether to go round the front or the back end 🤔. I had a brief period of indecision and then I let out a big snort. Did the trick hehe 😀

For future reference, I think bovines kick forwards as opposed to equines which kick backwards (I worked this out because I worked with horses and you had to keep close, even at the front end where they could "cow kick"), so the back end would probably have been your best bet

This is some serious making it up as you shuffle along with the rest of us. LOL.

Just epic, all of it.

Hope you are good and strong.

A joy to read your posts and your advice as always.

This for me personally is mind blowing.At least dreaming is free.

Take good care of you.

We used to live in Ely and my father, being a great walker and having time on his hands after retiring, actually walked the local byeways and footpaths for the Council. Map in hand he would note where they’d been ploughed up by a local farmer, no longer visible, ended in the middle of nowhere, impassable etc. Don't know whether they did anything about it, but it kept him busy. Don’t think he got as far as Cambridge though!

Lovely report on a lovely run. Pity I wasn’t a runner when I lived there - it’s certainly flat!

Yes this river leads up through the fens and out past Ely, so these paths and trails will take you that way. It will be an adventure for another day. Maybe could form a marathon route there and back. I'm nearer there in a few weeks for the Willingham fen gallop race 😎

An accidental half marathon! Amazing! And brand new cows too. A good day

Thanks sqkr. Some of them looked very similar. I suspect they are plotting against me hehe

Supernoodle indeed! That is so epic. You are progressing so fast, it's a sight to behold 😀

Thankyou, too generous. There are some remarkable runners on here like MikeJones68 Langleyloper and sqkr above who put such hard work in. I'd be a cheat against them but I'm happy with my efforts 😊

2hrs + later and you are still running even though you didn’t feel like going out. That’s awesome . That’s the power of running. That’s what we all love. And you just popped a impromptu half marathon into a Friday evening✋.

Go you and your awesomeness.

Fantastic run and write up. What a great way to start your HM career. Things can only get easier!

Thanks LL, seeing all your amazing efforts and grafting on the asics plan encouraged me to push on through. Will have to work on getting the speed in like you with some medium range runs.

Well done - a great way to start your HMs! Looks like an interesting enjoyable run. 🙂 👏🏼👏🏼

Crikey, not sure I have another one in me lol..

Hehe well at least one more in October! 🙂

Well done on the unexpected HM! You and Flick make a good team! Sounds like a lovely run apart from the nettles.

Waterworld part two.. this one has seals

So due to all that I had to run east towards cambridge and what a run it turned out to be. It...

front and didn't once feel like I wanted to give up - I ran faster than I have ever run on my life...

my normal route in the park so ran around the river and over the bridges it was so beautiful and...

ended up running over Chelsea Bridge, (so pretty and magical all lit up) and along the river...