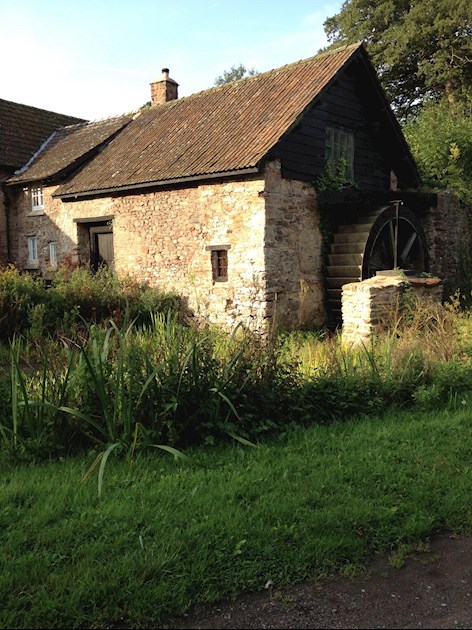 It has been a mixed bag of weather down in Somerset this week so I was delighted to see the sunshine when I opened the curtains this morning. ☀️ I set off with the dog not really sure which route to take but then decided to take the steep lane out of the village, walking!! As soon as the lane levelled out a bit we started running and went off into the woods, along an uneven trail, to the next hamlet. Squiggs has discovered a new exciting creature - squirrels! The wiggling tail is simply irresistible and meant a lot of pulling, sometimes in the wrong direction 😉 After reaching the next hamlet we ran down the lane and then bridleways with tall hedges. I decided to explore a track that I had never been down before and once again a lovely surprise.....a beautiful old water mill (see photo). After crossing the main road we jogged along in the warm sunshine through two more hamlets and eventually back to Mum's village. 7.6k in just under an hour, a very enjoyable run 😊

Someone's got the running tourism bug! Sounds like a perfect run, new places, hamlets, squirrels and perfect weather. We can always drive my sister's springer mad just by saying "look, squirrels!" at which point she runs to the nearest tree, puts her paws up it and looks hopefully into the branches. My sister's 2 border collies hunt them as a team, and her now deceased terrier used to actually catch them now and then. Dog paradise!

Ha, ha - that made me smile imagining Team Collie. The JR must have been speedy!

..what a find! Well done on another lovely run!☺

skysue16Graduate10 in reply to Sandraj39

I love the sound of all those different types of paths, it was worth braving the hilly path out of the village

Ah lovely! Great joy to be had from a run in lovely surroundings with your pal. Ah! Sigh 🙂

In fact I never feel like eating after a run so no breakfast (sometimes like a banana though). Nice lunch out later with family 🍴

I am not sure I could be described as 'intrepid', more curious 😊

Are you on a tour for your holidays?

No, visiting family but in different locations! Just thought it would be a good opportunity to do some exploring.

Beautiful..on all levels... lovely photograph...a great run too.... enjoy the rest of your hols!

Thanks oldfloss, having a relaxing time and just heard from hubby tonight - he is safe after a very hard climb to 5000m in -25c windchill!

Looks lovely Sue, glad the weather was kind to you.😊x

is time for a little holiday 😀 visiting family down in Exmoor. So we set off early for the three...

pace, Squiggs out in front loving every minute and me too! The next bridle way took us down back...

marshes and pebbly beach! I took the lane out of the village, down the footpaths, around some...

humid start to the day. I set off from the hotel along the cycle path around the bay. The path was...

fog, sunshine and very heavy down pours ......doggie and me definitely needed a RUN!! I decided to...