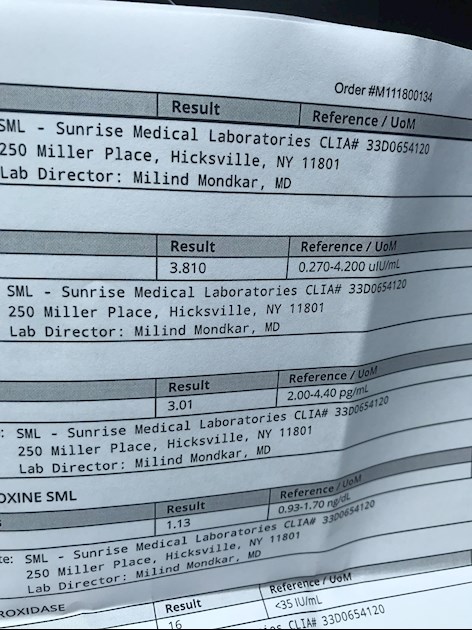 I have had hypo symptoms for a long time Often feeling cold and puffy face weight gain fatigue brain fogHave been on 90mg Armour for 4 yrs and Cytomel for 6 months. Felt really hot! recently got my levels tested , I know I kinda been terrible about have consistent blood work but I realized I needed to change my meds because I was feeling so exhausted and fat... Anyhow my levels are shown below in pics

My endo says my levels are “normal” but put me on 25mcg Levothyroxine with plans to redo my blood work in 2 months. What do you guys think?

Please can you also post the ranges. Did you have anti-bodies tested ? - to rule out Hashimotos ...

Why did you stop Armour? Did you feel better on it than now? Your results suggest undermedication. TSH is usually best between 0.2 and 1, with free T3 around 3.7-.8 and Free T4 1.5 with the ranges you give. I suspect the bit we can't see properly at the bottom is negative TPO antibodies, but you need TG antibodies tested as well. Perhaps you could edit the post and type the results with ranges instead of the bad photo

And 25 mcg levo is probably going to make you feel worse, rather than better. A starting dose should be at least 50 mcg. Make sure you get retested in six weeks from starting the 25 mcg. You could possibly find your TSH has gone up!

Thank you all for your replies!

I agree I would like to start on higher dose. Still cold and puffy faced. Apologize for bad photo!

I did have negative TPO thankfully.

Can post values on another post . I didn’t feel good on Armour , my TSH on Armour was 0.007. Felt exhausted and hot and muscles ached.

Didn’ lose any weight either.

Hi, I'm currently off work as I keep feeling faint, some tachycardia (which I know doesn't add up,...

My TSH levels are 2.33 and my Anti tpo levels are 769. I have a painful lump in my right armpit and

The doctor says my 'levels are normal' and disregards it. I've just had a blood test done (by...

TSH high - everything else normal

refused at least a trial of treatment following blood test results which showed a TSH of 4.7. I...

T4 too high with normal TSH

feelings and unable to sleep.

She’s had a thyroid blood test recently which show her T4 is over...

Please could someone review this for me...

Hashimotos, in range. Should I take 25mcg Levoxyl?

Time to refresh thinking on the terminology and management o...