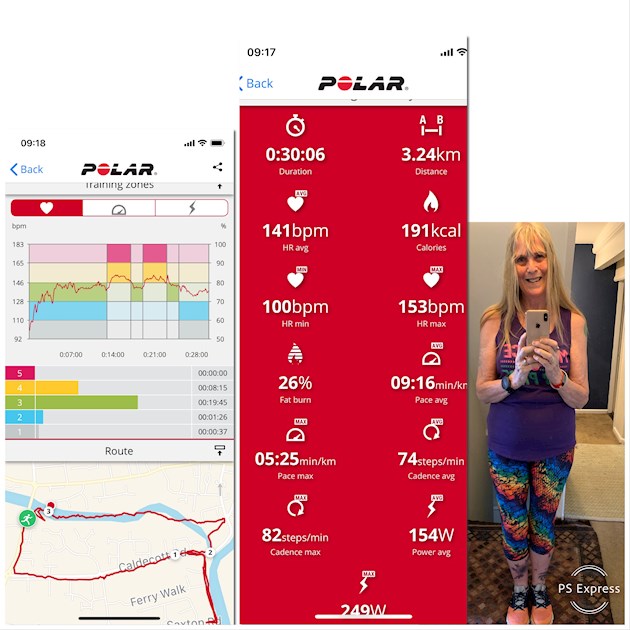 That was TOUGH! The fast bits were only 4 minutes each, but I found myself wishing they would end, and my legs were aching. I stayed pretty much in the zones today, except the cool down when my HR stayed stubbornly up in zone 3. The heat didn’t help. A faster run today, but at this rate I’m never going to run further than 5k!

But I can’t complain. I saw red kites, heard a buzzard calling, ran along two different rivers and embraced nature (no, not bare arsed naked!). And a man on a bike asked me why I was running slowly. I explained about the heart rate zone training and he said: oh, Fitbit then ...

Back home now, red in the face and sweaty, though I’m still happier running in the heat than the cold.

Edit: just checked my VO2 Max and it’s gone up to 36. I’m 72 years old so that isn’t bad at all! It puts me back in the elite category. And shows the training is helping too.

Congratulations Flick, you are in the elete category, excellent, training helps a lot, by the way I ran my first parkrun this morning, very pleased with my time, 34.16, second in age category 73, I was hoping for a sub 40 minute 5K, in fact I got a sub 35 minute 5K. 😊

I’ve been in the elite category most of the time, but never that high.

Well done for your park run time! My fastest was 33.24 but only on the treadmill. I don’t think I’ve managed faster than 38 outside. My one and only park run, I was a lot slower.

I thought treadmills were dreadful, hence the name dreadmill but since I got my gait analysis I enjoyed being on one and won't call that name again, I think if I got on a treadmill I MIGHT be able to run a 5K in 30 minutes or slightly less, not sure. 😊

I hate my little treadmill, but I’m very grateful to it in winter, when it’s too icy to run outside.

Four minutes sounds a long time for fast bits! My interval training sessions included 30 s fast bits and they were long enough. I think I did try upping it to 45s at one point ... but 4 minutes sounds torture! Good luck

FlickM3Half Marathon in reply to linda9389

It was hard, but I enjoyed it in retrospect. It was my second intervals session since I started the plan but last time seemed easier

I found the intervals hard too, not initially as I went from zone 2 to zone 3 but in zone 4 it is tough! It works though. I would guess that as you have upped your max heart rate your intervals are working you in a higher zone than last time. I love seeing the time become less in these zones lol but I can never get my heartrate down from zone 4 to zone 2 without walking first.

I did my long run on Friday and I struggled to stay in zone 2.... most of my run was zone 3 so easier. I think I'm still focusing on speed rather than accepting I need to pace well for my marathon. I am feeling fitter, I just need to not worry about how slow we are going! I get higher index scores if I stay in my zones.... I just feel at times I could run in zone 4, but maybe not for a long duration so I'm sure they know best!

Do you think we run in zone 3 on race day? X

Sounds like you’re doing really well and getting a lot from the training. I certainly feel as if I am. I’m just about to add a post from today’s training, 80 mins in zones 1&2- my watch kept auto pausing! I was wondering the same about the race itself. I’m guessing it will be zones 1&2 to begin, then steadily in zone 3 and a mad zone 4/5 dash at the end- though more likely a mad crawl in my case! X

Lovely writing again Flick. I'm a bit relieved - same age - same 36 VO2 on the Garmin 235 (briefly 37 for a couple of weeks) and I presumed that was disappointingly low. Nice to be bracketed in with you as an 'Elite". Never been an elite before.....

FlickM3Half Marathon in reply to Duddles

36 is really high for our age. I was in elite when it was 31 😊 it’s higher for men than women at any age though. Look up the tables on google, it’s fascinating

I was up to 37 for a few weeks, then did a long distance (32.5 miles - 7 and a half hours) race walk in June, obviously at a lower speed than running, and went down to 36. It was much harder than a 5k run obviously, but the Garmin thought I was putting in less effort than normal, so back down to 36.

However, the number 73 comes my way tomorrow on St Swithin's Day. So we should be grateful to be even thinking about VO2 numbers. (But determined to get them higher....)

FlickM3Half Marathon in reply to Duddles

Yes, it does seem to be related to exertion. and don't even think that way. no reason to be grateful - up to a point, health is down to how you live your life. Plenty of people older than us still running. that Indian man who runs marathons regularly didn't start running till he was in his mid 80s

I got, and I’m someone who loves the heat normally.

Although I’m getting the endorphins after a run, I’m not getting that wonderful high during a run...

longer) as I’m almost certainly going to have to nurse it round, especially the last 5k or so. VO2...

On the IC for the first time ever