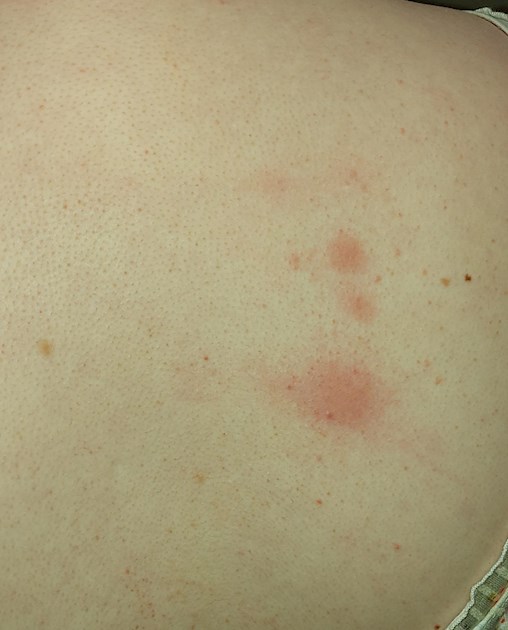 Hi! I had my first set of bloods done this week and everything came back clear. My symptoms are starting to really control my life now and movement is becoming much tougher due to joint pain and mostly weakness in my muscles

I have broken out in scaly circle shaped rashes all over my back aswell which is new. I have attached a photo below

I wondered what next steps I can take with a negative ANA? I know something is wrong and my symptoms are extremely consistent with lupus.

Has anyone gone through this before and achieved a diagnosis? I'm so frustrated at not having an answer so I'm looking for some positive signs I'm not wasting my time.

nim98
To view profiles and participate in discussions please or .
Read more about...
12 Replies
•

Can you post a photo of the rash? Did your doctor see it?

What is making movement hard? The muscles? Weakness? Joints?

These illnesses are hard to pin down, particularly in early phases. Rashes can be a big clue. Someone needs to see that rash on your back.

nim98 in reply to KayHimm2 years ago

I've just edited the post to add a photo of the rash.

It's mostly muscle pain and aches at the minute making all my limbs feel heavy and some joint pain in my knees, hips and hands!

Hoping to get to a doctors tomorrow to show the rash in person which will hopefully lead to something more!

You are definitely not wasting time getting your rash evaluated. There are many people here who may have had a similar rash and will pop in.

One good thing about the rash being on your back is that they can biopsy it. With the face they don’t usually do it.

Hi nim have you been refered to a dermatologist for the rash ?

nim98 in reply to Pmeh2 years ago

No dermatologist but I've been referred to a rheumatologist now so fingers crossed they can help!!

Pmeh in reply to nim982 years ago

nim98 in reply to Pmeh2 years ago

I'll look into it! Thank you for your help 😊

I have the same rashes and joint pain. I was originally diagnosed with psoriasis and PsA 10 years ago. Recently I have what me and my dermatologist thought was resistant scalp psoriasis. She decided to do a biopsy thinking it might be eczema but it came back as Lupus. Have the dermatologist do a skin biopsy because my lab test were also negative. I am now waiting to see eye doctor for drug clearance and following up with my rheumatologist. Best of luck. My dermatologist said you can have lupus with negative labs.

Hatty4 in reply to Swampthing21 year ago

I’m waiting to get a scalp biopsy at the moment. How much hair had to be shaved off to do it, and did it show? My dermatologist has said that the procedure may end up causing patches of hair loss that may not grow back due to having scarring hair loss.

Swampthing2 in reply to Hatty41 year ago

I have a full head of hair with very little balding. My dermatologist was treating for scalp psoriasis but it would clear up after 2 years. She took the biopsy from the crown and it was a shave biopsy not a punch biopsy. It was small, about the size of a pencil eraser. She cauterized the area to stop the bleeding and I don’t feel I have lost hair from the area.

I have had a rash like yours which in my case turned out to be Sjögren’s.

My ANA is positive now but I don’t carry Ro or La antibodies. I am antibody positive for systemic sclerosis now though. Both these diseases can cause rashes and all the symptoms you describe. 30% of people with Sjögren’s are seronegative.

You may need skin or other biopsies to get a diagnosis if your bloods are all normal. My advice is to stop focusing only on Lupus because many autoimmune diseases cause similar rashes and the other symptoms you describe including Sjögren’s, Vasculitis and RA, PsA, Myositis etc.

I agree with @282523 that it is best not to focus on one illness. This sort of diagnosis is hard enough for rheumatologists. There are many things that are taken into account and people’s symptoms can change later so that diagnosis becomes clearer.

I don’t think it is an issue of steps to take with a negative ANA. A rheumatologist can see if there are lupus signs and watch for development. From what I can see, the majority of rheumatologists will diagnose lupus with negative ANA if kidney biopsy is positive.

There are many other conditions that could be brewing. Good you have photos of your rash. Autoimmune diseases can have characteristic skin symptoms. Many of our symptoms are vague, and that makes it hard for us and the doctors.

Hope that is helpful. This is a tough time - like being in limbo.

shown up with lupus anticoagulant and smooth muscle antibodies even though I was ana negative, he...

Doctor? If ANA Is positive and antibodies negative, does that mean I don’t have lupus? Symptoms......

Hi my ana was positive and recently had I checked privately through medichecks. It's came back...
•4 years ago
33 Replies

that it's near on impossible 2 have lupus if u have a negative ANA so I've pulled up a couple of...