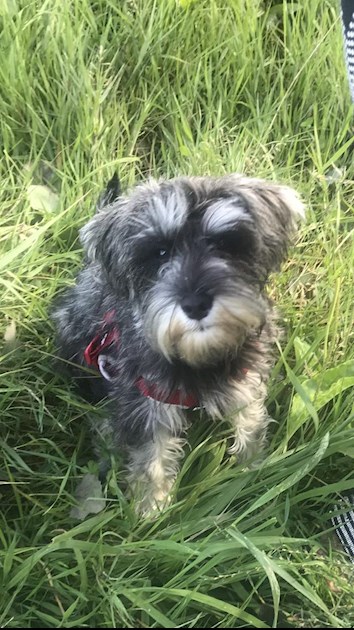 Morning everybody- well little Mira this week managed to get stuck under the patio resulting in my son having to take one of the boards up - I managed to squeeze her through as she’s so tiny, she’s a little minx but so cute with it 😊

Have a good week everybody xx

svfarmer in reply to MEGS53

Yes I am feeling bit better thanks xx

Oh bless her. She looks such a little character xx

Oh she definitely is 😂

What a minx mira was this Bank Hol. What a relief svfarmer you managed to rescue her. She looks like 'butter wouldn't melt' doesn't she?. Hope you all have a quieter rest of the week. Keep well and safeXx and a pat for mira.

Hi Horsewhisper, I hope you are keeping okay? I haven’t seen you on the forum for a while and wondered how you are doing. Any interesting wildlife sightings lately? Take care. 🤗😘

H Spotty, it’s good to hear from you - been a bit busy with the whole back to school thing, sorting out kit, clothes etc and trying to make the most of doing stuff with the kids as I will miss them having been with them everyday for 5 months! No new sightings on the wildlife front but the fungi round here has been prolific! We came back from a walk round next door’s farm and came across the most enormous field mushrooms! One was about 10 inches in diameter and I held it like it was an umbrella! We picked a few and when we got home, I chopped and fried them in olive oil and herbs and we had them on toast for lunch! Delicious! So just ticking along at the moment really, feeling a bit nervous about the whole return to school as at my Rheumy telephone appointment, he said that I need to continue shielding “well into next year”. Although I half expected him to say it and I I suspect it’s the same for a large number of people on here, but a bit of a blow to hear it officially. Kids can go back to school, fortunately I don’t have to isolate from them, but they have to shower and change as soon as they get in. Coupled with not being able to drive due to neurological investigations, I feel a bit of a prisoner in my own home. At least I can travel about on my horse, bike and on foot, but we are miles from anywhere! My goodness what a long reply! Oh well, I’ll make the most of what I’ve got and enjoy it as much as I can, I do have a lot to be thankful for and must remember that. I’ll take a pic of any giant mushies and post them here for you to see. Thanks for asking, it has been a bit tough recently. 🍄👍🤗😘

So pleased to hear you are okay and still able to get out on your horse, bike and on foot. Tough hearing you have to remain sheltering for so much longer, and a worry with children returning to school. That is a whopper of a field mushroom you found! Yes, you’ll need to photograph it if you find another that size.

I’m still fighting for the badgers whose sett was disturbed during recent felling and has since been abandoned. It transpires that 20 metres should have been left as a buffer between felled area and the sett and this buffer could be felled by hand during the permitted period starting 1st July. The fact I have a photo of the sett within 2 metres of the felled area dated 11th June shows felling took place within the buffer before the permitted period! Wildlife Crimes officer is dragging his heels. Money and big business talks every time. So sad. But I’m not giving up.

Anyway, I hope all goes well when the children return to school. Keep safe and well. 🤗😘x

Oh Spotty that’s awful about the badger sett, so plain wrong to disturb their home - and to fell too close to the buffer area and before the permitted time period. What is the point of setting these parameters? Really glad you are speaking up for Brock and his family, sounds like they need a voice! Are they going to build houses on the felled area? Hope it doesn’t impact on you and your wildlife too much. I managed to see a couple of deer who leapt out of a copse in front of us today and a lovely buzzard swooping away. Just lovely. Anyway, nearly there with the school admin, the kids are looking forward to seeing their friends which is good. You keep safe and well too! 🦌 🦅🤗😘

Yes, I’m trying my best for Brock and all his family and have my local councillor on board too.👍🏻 Why have rules if they aren’t enforced? 🤷‍♀️ Crazy, but as I say I think big money talks.

The woodland is grown as a cash crop but they still need permission from Scottish Forestry to fell and are supposed to follow the rules and conditions laid down in their licence. They have never felled during the Spring/summer before and I think they were taking advantage of the lockdown thinking nobody would see what they were up to and realise they weren’t following the conditions of the licence. Disgusting! I could really do without the stress of it all, but somebody has to speak up for the wildlife.

Lovely you saw 2 deer. 😍 We saw 2 roe deer frolicking in a field not far from the felled area a few weeks ago. We also heard a buzzard overhead but didn’t actually see him. The deer disturbed 2 hares which raced off into the nearby long grass - so funny. Isn’t nature wonderful? 🥰 I just hope big business doesn’t destroy it all.🙏🏻

Good to hear you are ready for the kids returning to school and that they are eager to meet up with their pals. Oh what it is to be young! 😉😁

I've been in jail since March too HW 🤗 gilded prison with only hubby for company so can understand that you'll miss your children.. they're great companions!! Mine r grown now but do send me videos of what they're doing!!

Mushrooms on toast sounds fab..picked from the field n into the pan..can't get fresher than that!! 😋

I've had a sparrowhawk in the garden on two occasions recently..first time it had caught s sparrow (fair enough) but the second time it took a pidgeon!! They're were feathers everywhere n obvious signs of a struggle...a few broken slabs had been displaced on our little broken slab border!! 🦅

Pigeons and doves are our resident sparrowhawk’s favourite food. One wee tip which you might already know, if you find a dead pigeon the sparrow hawk has killed, don’t bury it. If you do the sparrow hawk will kill another bird, if you don’t he will return for a couple of days feeding off the same bird (unless a fox or something takes it way of course!) We leanred that the hard way.🤨

Glad to hear you have things to do whilst in prison Kat. At least you aren’t in solitary confinement and have hubby and your wee doggie for company. 👍🏻👍🏻 Take care. 🤗😘

That's handy to know spotty 🤗 thank u!! It did leave the pidgeon carcass in the garden n came back to feed on it later that day..then hubby put it over the fence into the field next door so that our dog couldn't get at it!! It was right outside the bathroom window which is high up on the wall n I did manage to get a really good view to take some pics!! Mind u I had to stand on a bucket of fat balls in order to get the pic!! Living dangerously..that's me!! Action girl!! 😹👍

Hope you're both keeping ok 🌈😽😽xx

Your balance must be better than mine Kat. 😉 Standing on a bucket would have resulted in some action shots, mainly of the bathroom ceiling, if it had been me!😂😂 You’ll need to post your pictures for us to see. Good to know you are still an action girl despite the confinement. 👏🏻👏🏻 There’s no stopping you!😹

We are both fine thanks Kat. Hubby still waiting for his heart ablation and starting to get unpleasant side effects from the high dose Apixaban he’s on whilst waiting for it. Mind you there has been a spike of covid19 cases in Glasgow so it might be a blessing he isn’t going yet.

That must have been scary for both of you until your son rescued her. A wee minx indeed. Haha. I hope she doesn’t do that again. Glad to hear you are feeling a bit better Farmer. 🤗😘

Beautiful , always puts a smile on my face 🙌🏻👍x

Mira the Minx!! 🐶💜 Good name!! Reminds me of Minnie the Minx in the Beano?? Or the Dandy?? One of those comics back in the day!! 🤭

Mira is just soooo adorable! Never seen such a cute dog. Even if she is a minx it must be very hard to get cross with her. Xx

Hi KK, such kind words, thank you for your understanding and yes - there seem to be quite a few of us on here living in cages without bars! That’s how it feels to me - we could go out, but we can’t! Great that your kids send you videos of what they’re up to - we bought my mum one of those Alexa screens so we can see each other when we call and it has really perked her up as she can see her grandkids and chat away to us as if we are in the same room. She lost a lot of weight during lockdown through not eating properly, so we have organised meals on wheels for her and that seems to have helped a lot. She’s tough as old boots but the pandemic has got to her, understandably.

Sorry to hear about the pigeon - the Sparrowhawk sounds a right hooligan, but they are known to be pretty efficient predators - as well as garden vandals in your case!

Yeah you’re right KK - it’s nice that there are a few of us who are doing this stretch together, it’s nice to have the company! Hope you are doing ok? 🐦 🤗😘

this is a picture of Mira after I had cut the grass on my sit on mower - we have a huge garden but...

Good morning everybody hope all had a good weekend- Mira has been to the groomers and had a proper...

all had a good weekend - this picture of Mira is her sat on my lap where she is happiest , she’s...

picture of Mira is her looking very grown up - she’s 1 on 10th April - her anxiety is getting...

Good morning everybody hope all are as well as can be - here is a picture of Mira looking very...

Lupus in the brain

For all of you who are struggling ❤️❤️❤️