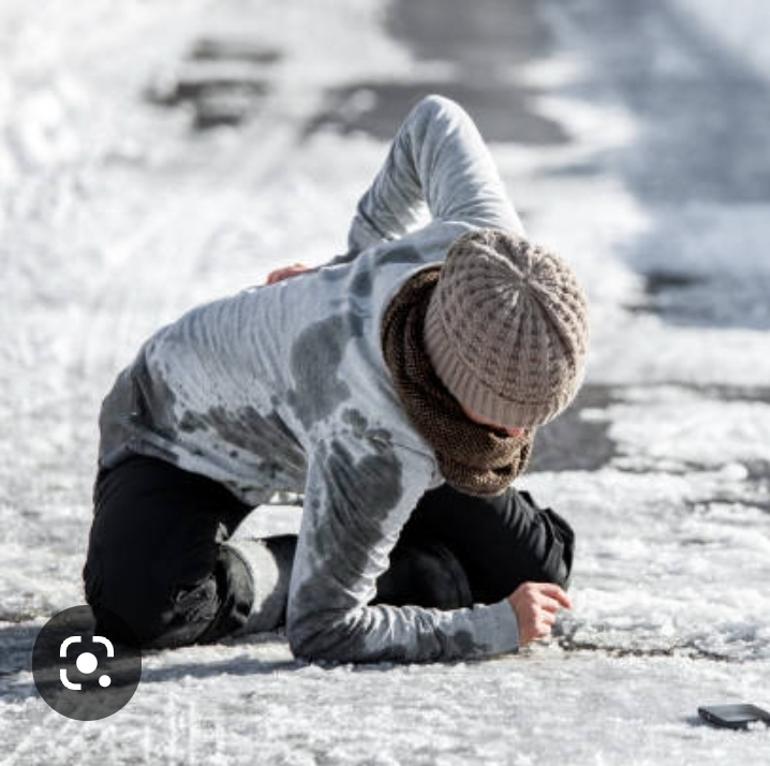 Image courtesy of Google, I was far less elegant!!Having sensibly not run all week because of the conditions I decided I could go today and tomorrow. I had to go early because of things I needed to do, so up and out by 07.00. Lit up and layered up I set off. About 0.5 km in I knew they was a puddle where the lane always floods, so I was already walking when I slipped on black ice.

It wasn't graceful, somehow I managed to control it enough to land sideways, so the impact went hip, elbow and hand/wrist . I was flat out, sprawled across the lane😬

Initial assessment seemed OK, I jogged off and spent about 0.5 km doing mental assessment of potential injuries to my body, then a few minutes wondering if I had damaged my leggings! At 3km I was thinking my elbow was making itself known, but nothing too concerning.

Once home all appears to be intact, including the leggings 🤣

Jell6
Graduate
To view profiles and participate in discussions please or .
16 Replies
•

So glad you’re ok. Great job keeping going. It can really shake you up. Glad you and the clothing are still intact.

I did a super slow run Thursday evening due to the ice. Was a lot better on today’s run but I’m hopping onto the roads for any particularly dicey sections - and sticking to the back streets for that purpose.

Hope you get a bit of a thaw too. It’s hopefully going to warm up this week.

Well done Jell6 glad you didn’t hurt yourself! I was out early this morning (not running) but even so I had to tread very carefully! Lots of little baby steps 😁🥶.

Jell6Graduate in reply to Frenc12 days ago

Thank you, I do like colder runs, but maybe not this cold!

Glad you're okay! I'm afraid ice is a no no for me...I'm waiting until it thaws...could be a while!!

I honestly thought the roads were clear, but you know what thought did!

Glad you’re ok. I had a fall before Christmas that is still having an effect now. Funnily enough the first thing I was concerned about (after stopping my run watch so my stats weren’t in the toilet!) was whether my leggings were ok or not. They were!

For me, ice is a “don’t go out there” rather than “be careful out there”. Six weeks after falling (not on ice) it still hurts to put the handbrake on and I couldn’t drive at all for over a month. I’m not risking that again! Luckily I’ve got local trails that freeze solid or become muddy. That means they’re safe to run on, if a bit challenging and an absolute pain for shoe cleaning!

Jell6Graduate in reply to MissUnderstanding12 days ago

You stopped your watch 🤣. Its so easy to lose traction isn't it. I'm sorry you're still feeling the effects so many weeks later, and honestly I would also choose no run over an icy run, my assessment was clearly wrong. My leggings were my favourite fleece leggings so my concern about them was real!!.

I hope you're injury settles soon.x

Sorry to hear you had a fall Jell6 , and I very much hope you'll be fine. Keep an eye on how things go, and don't hesitate to get yourself checked out if necessary.

I'm with MissUnderstanding re risk - while I had a lovely run on fresh snow today, I refuse to run when it's icy. It took me three months after my end of June faceplant to start to run normally again (if my idiosyncratic running can ever be called normal.) Six months later restarting yoga revealed that my right leg still isn't fully healed, though thankfully the yoga is helping.

Jell6Graduate in reply to Cmoi12 days ago

Glad you are on the mend, it's so easily done isn't it? I will be extra cautious, but tbh I thought I had safely assessed the risk...

My most recent faceplant in February last year was actually reasonably controlled. I landed to one side, almost rolling into it and only grazed above my left eyebrow.

I was just past a school and a passing teacher stopped his car and frogmarched me to the reception where they superficially checked me for concussion and applied a sticking plaster.

I continued my run, more concerned that I was going to miss my work video call!

I sent the staff of the school a big tub of Celebrations as a thank you.

Flipping heck, reading these replies makes me realise how many of us fall over!How kind of the teacher to look after you, and that you sent them some chocolates 😍

I had a fall on Christmas Eve when it was wet and getting dark but not icy. Since then I have only managed one outdoor run mainly through nervousness but also because of icy pavements so to ensure that I am still running I’ve been going by to the gym.

I don’t love it and I miss my outdoor runs but I am still very worried about falling again. It really shook me and has stayed with me.

Getting back to the point - I’m pleased that you didn’t sustain any injuries but I really would urge caution because this feeling of fear after a fall is not one I’d wish on you.

I'm sorry to hear this, but I can understand the nervousness, it's easy to lose confidence. I had made the decision to not run in unsafe conditions and didn't run all week then out of all the clear roads and lanes I managed to find that small area of black ice. I got back on the horse this morning, so it didn't become "a thing" and it was later, the sun was just coming up (see photo) I really hope that you are able to get outside runs again soon, middle of the day runs if possible, everything is clearer then generally .

Sun rising over the golf course

ugh I’ve been there! It made me so much more nervous running with icy conditions. With our up and down winters the last few years my outside running is non-existent but at least I’m still moving albeit in the treadmill. I’m glad you’re ok and the leggings survived the fall as well!

Hello 👋! I doubt I would ever do winter running outside in the conditions you have!. Glad you are still getting your runs in on the treadmill though 😘

out there and not care about how I looked in my leggings and T-shirt, shuffling along, I was just...

Check out these bad girls...

The song that makes you happy 😊 🏃🏾

One run to graduate! Celebration?