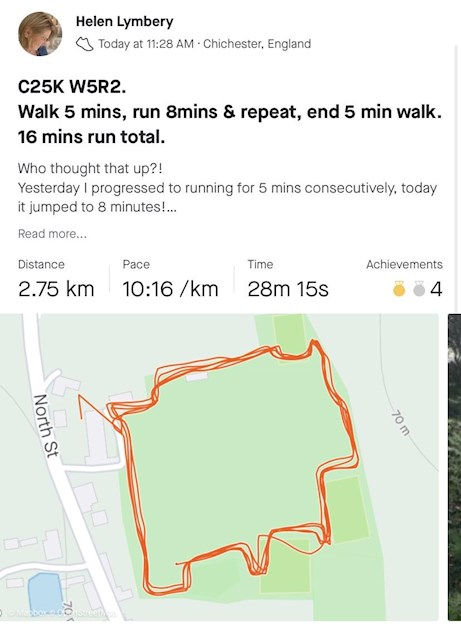 I started W5R1 yesterday & was shocked to see I was upping my game to 5 consecutive minutes of running & 3 x over!

Mind you it was actually doable & it reminded me I would not have managed that a few weeks ago.

So today, off I go to do W5R2 expecting the same amount of walking & running & oh my hat, I couldn’t believe it! It wanted me to run for 8 consecutive minutes twice over. Mind you, again I did it! Who would have thought that a few weeks ago!

Goodness me, I jumped to 5 min runs, then straight to 8 min runs in a day! I dread to think what W5R3 will be! I think I can guess! 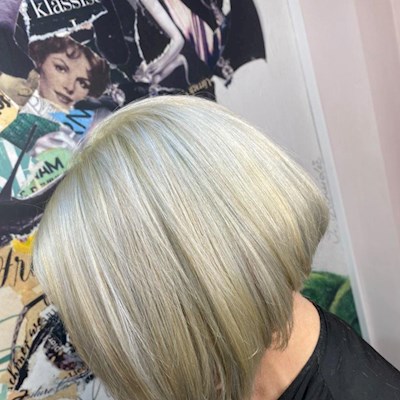 hells_bells2207
To view profiles and participate in discussions please or .
18 Replies
•

I notice you said you ran yesterday AND today ! Did you not have a rest day ??

hells_bells2207 in reply to Instructor57

You are right, I did run on two consecutive days, this is the very first time it’s happened. To get my runs in, I needed to do this. I did lots of stretches! Unlikely to happen again.

As a new runner it is important to have at least one rest day between runs until you have been running regularly for around 9 to 12 months .You are better to miss a run rather than running on consecutive days to fit a run in.

Overuse injuries can happen out of the blue during your run and can literally stop you in your tracks putting you out for days, weeks or even longer.

It is is not worth the risk .

hells_bells2207 in reply to Instructor57

Ah thank you! I understand it now, so I will not be doing that again. I’m pleased you explained that new runners shouldn’t, because it doesn’t help when I see all these posts where people have been out running days on the trot!

However they are probably advanced runners!

I had thought I’d reply ‘sorry teacher’ & make a joke of it, but I now see the seriousness of this.

I hadn’t realised, so seriously thank you very much.

But at the same time ‘sorry teacher’

Haha , no worries ! But I have to point these things out , hopefully in a friendly manner 😁

AND i understand about the posts with people running everyday !

I personally don't think those posts on this forum are helpful as i feel it weakens the point we try to make to newer members here who might not realise some of the posts are from people who have been running a number of years .

A rest day is in the program guide as 'Non negotiable' as so many have ended up on the injury couch and of course that is the last thing we want !

Anyway, well done with your progress and enjoy the rest of the program 😁👍

I got injured right at the end of C25K even though I didn't run on consecutive days. That was through ignoring a little niggle and pushing too hard on my final run. Then a sideways motion when avoiding a muddy puddle triggered an ankle sprain, which I ignored and kept running on it. That earned me a painful month on the Injury Couch and two physio visits.

That was all a year and a half ago. I didn't start running on consecutive days until I'd been able to run 15km in one go, about seven months after graduation, and having run almost every other day for most of that. I never did more than four days in a row until this month. I'm currently doing the RED January (Run Every Day) challenge. Instead of rest days I'm doing very short runs of just over 10 minutes.

But for someone just about to do their 15th run (as you are), your body needs time to recover and regroup after every run.

And don't worry about running for 20 minutes. You've prepared for it. It might help to think of it as two 10 minute runs or four 5 minute runs back to back.

Well done! It’s half the fun having a look at what we’ve achieved on Strava 😊🤩. Week 5 run 3 is very doable, one of the runs you’ll always remember.

hells_bells2207 in reply to Frenc

Thank you Kate.I was going to follow you on Strava, but obviously only know your Christian name.

You are not too far from me; I’m near Petersfield in Hampshire about 20 mins drive to Winchester! Have a good week.

Oooh yes Petersfield is very nearby. We have some nice countryside around don’t we, which makes it fun to explore. I bet there’s some smashing runs near you! 😊😊😊

hells_bells2207 in reply to Frenc

Yes some lovely runs all around Rogate & Petersfield, obviously we have the South Downs & Queen Elizabeth Country Park. Some routes are really really muddy though, so I have been running around the village green lately 😉.

To give you a better idea of what you've done recently and this will also help for the next week so, here's another way of looking at your recent runs:

Yes, it's that TOTAL that counts and that builds your fitness - NOT the length of individual segment (e.g. 5 mins, 8 mins etc). The TOTAL amount of time on your feet is what counts.

In total so far, you have 157 minutes (just over 2.5 hours) of running in your legs over the last nearly 5 weeks, from the 14 runs you've done so far. Your fitness has steadily accumulated with every run you've done.

For what lies ahead, remember this:

- your body is always ready for the next run, i.e. that's how a progressive program like C25K works.

- every run you've done prepares you for the next one.

So whatever increase from a total of 16 minutes W5R3 is, switch your brain off and let your body do what it's been prepared to do.

Ah ok, thank you. I will think of the total in future, which I haven’t been doing much.

No, virtually no-one does, so you're in excellent company. But it gives you the bigger picture, helps put into perspective what you've done so far and ... should help with your mindset ahead of ... you-know-what.

No one warned you this running malarkey is darn addictive 🤣

Fantastic. Well done on those 8 minutes 👏 👍 👌 🙌 They were the turning point for me when I "believed" I could do it.

You are ready, go really steady and believe in yourself. Oh! Has anyone mentioned - Dont skip those rest days 👍

Hi thats what i love about the program and well done you and keep laughing at the mind games of it. Mine tonight was week 7 run 1. I don’t even look now hahaha

I’ve made some sort of breakthrough!

work, my running has been ok at the very best. So this morning I set of to do a 50 minute run which...

one which was fine. I just would like to have seen some details of my run, oh well it’s technology...

honestly didn’t think it would work for me as I hadn’t run since leaving school over 40 years ago...

full distance within 30 minutes. I am so happy! Over six weeks ago I was running every other day...