Several years ago I had a bone scan when I had back pain, because of my previous cancer history. Everything was fine, except for some loss of density in my right hip (so that's osteopenia rather than osteoporosis). I was told I needed to begin weight bearing exercise (I was a real couch potato at the time).

I took up Pilates first of all, then 3 years ago when my back was stronger, started c25k.

Had another scan last week to see how things were after my ankle break, and, drumroll, it has improved! You could have knocked me down with a feather, I was hoping to have halted the bone loss, but I'm really delighted that, even after a year on the IC, it's better than it was, and no longer a concern.

So if anyone is looking for a reason to start c25k, here's another one! 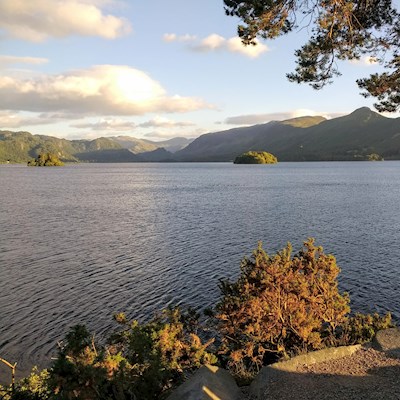 grumpyoldgirl
Graduate
To view profiles and participate in discussions please or .
54 Replies
•

Isn't it amazing, Jill! Nice to hear from you too, hope things are well with you 🤞

Running is THE best way to maintain bone density and strength, as mentioned in this post about Running and Aging healthunlocked.com/couchto5...

That’s fantastic news that I find very encouraging as I had a bone scan a couple of years ago (for a bunion op which I haven’t had.. yet) which found mild osteopenia. I’ve done lots of exercise in the past couple of years and you give me hope that my bone health may have improved as a result. Thank you! 😊

There you go, that's the exact reason I posted, because we are whistling in the dark with a lot of this, so I wanted to let people know it's having an effect☺️Hope you get your op soon, it's no fun having to wait 🤞

Hmm.. thanks grumpyoldgirl.. but I’m not actually on the waiting list because the surgeon said he wouldn’t have the op if he was me. I need a very complicated op on all my toes and there is a long recovery time and, of course, as my other foot is prosthetic it could mean I will be on the couch for a long time.. he said six months plus and up to two years.. but now almost two years since the consultation my toes have deteriorated.. I’m seeing a podiatrist on Monday to see if I can get any suggestions.. I may end up asking for the op but I’m very undecided - as you say, whistling in the dark..🤷🏻‍♀️

Ah that's so tough, what a decision. Hope the podiatrist can make things clearer for you💕

Fantastic. Running has more benefits than just saving the dent in our couches! So pleased for you.

You are indestructible Gog!! 👍

grumpyoldgirlGraduate in reply to Beachcomber66

I just wish I'd started years sooner, but it just goes to show it's never too late to make a change😊

Yes; I tell myself off for having “wish I had started earlier “ thoughts. I started when I really needed to and had too many other things to do earlier in life. Enjoying my Indian Summer.

Wow that’s wonderful, I had a scan over 20 years ago and had same in left hip I wonder if mines improved too

Well I expect it has, Sola! It's so good to know ☺️

That’s great to know I had a scan and had the old osteopenia in my hip and shoulder so fantastic to know all this running lark will help!! Whoopee

It's definitely worth it☺️ it's good for us, and it makes us feel good too, love it!

You have certainly cheered everyone up this morning with this news!

Thank you for sharing your news as I was also Osteopenic on the last scan, having improved from Osteoporosis. I have taken meds and exercised so not sure which was the most helpful, but now I've been running for a year in September, would be interested to know if there's further improvement. It's amazing what the body will do if you treat it as it was intended.Such good news for you Grumpyoldgirl , and no better incentive to keep running, have a good day and best wishes ☺️

Go us, Raisemeup! 🙌 I admit I took up running out of fear as much as anything, I didn't expect to find myself loving it 😁💕

I was scanned a few years ago and have osteoporosis but only just. I avoided running for years as I had a knee injury in my 20s and was told I was prone to arthritis plus doctor said ‘don’t run ‘.I started C25K in March as I read quite a few things suggesting it wasn’t harmful and things seem to have improved. The pain has decreased and I’m sure my overall health has improved.

Having seen my mother crumble away and suffer from osteoporosis, arthritis and other things I’ll do whatever I can to avoid it.

Wow, your user name says it all really! I'm like you, I just need to be extra careful, and do my stretches and strengthening. Sometimes I have to do them before I get up to get things moving. I definitely feel so much better when I can run. So sorry about your mum, that must have been hard to witness. So many health professionals still think running is bad for arthritis etc. I'm glad that's beginning to change!

I deliberately haven’t asked my doctor about it because I don’t want to be told to stop ;)What I can’t understand is how I can run for 5 km and feel absolutely fine but going up and down stairs is such hard work!

That's such good news grumpyoldgirl. So pleased for you. Running so good isn't it? 😊

I blooming love it, Cressida! 😊

That’s great news! I was diagnosed with osteopenia last month, following a recent cancer diagnosis. I completed the C25K programme last year, and run 5K twice a week now. I have another bone density scan in two years, so fingers crossed I will get similar news to you!

That's really interesting. I'm currently nursing a fracture at the bottom of my fibula and it's really encouraging to hear that going back to running would be good - though I'm kind of terrified as well.

grumpyoldgirlGraduate in reply to Rowers

I was surprised and really pleased that when I broke my ankle, none of the professionals tried to discourage me from running again. The physio kept tweaking my exercises to give me the best chance to return. It's actually the ligament damage that has taken the most recovery time, the bones are just fine! 😁

Your post is so helpful to all of us who have been warned. I do Pilates and took up C25K, as well, for these benefits you describe. I just wish Dexa scans were routine in NHS and we could see the improvement! Well done to you!

grumpyoldgirlGraduate in reply to Buna

Thanks Buna, Pilates is such a brilliant companion to running, especially for a more mature lady like myself😁I agree with you about the scans, it would surely be cost effective in the long run. A friend of mine only recently discovered osteoporosis when she broke her wrist.

Good point about the Dexa scans. I wonder if it’s worth asking the GP for a follow up as mine was done a few years ago? Do they only do them if you’re in pain?Having seen how debilitating osteoporosis can be it’s not something I want.

When I had my first scan I was advised to get another after 5 years. It's been a bit longer than that, and when I broke my ankle last year the doctor at a&e advised me to get another one, so I asked my GP. I'm not sure it would have happened without my particular set of circumstances, and definitely only because I asked for it. In your shoes, I would definitely ask for it.

yes, you would have to crawl in to convince a GP..they ask you lots of questions and if you dont pass, you dont get a scan! Its more difficult than you think it will be…and even if you had one in the past, it doesnt count if you dont qualify based on answers. Now you are going to ask me what the questions are: I cant recall but do I recall thinking that you cant really fib on them!

haha. You will have to do more than that to qualify! Be careful he doesnt suggest physio for old age because of your shuffling and limp! 😂😂

I’d be delighted for some physio, last time I needed it I was advised to go private because of the waiting list. Money well spent!

FYI, this is from a 67-year old bat, who has reinvented herself due to C25K…botox next!

Reinvention, yes. Botox? Not so sure. Purely for myself I’d rather look lived in than well preserved (just like my house 😂)

Pleased for you. I’ve got my bone density scan in two weeks. I’ve been running for a year so will be really hacked off if there’s been no improvement!!

Great news GOG! I had a scan a couple of years ago when I broke my wrist and like you some loss of density was identified. I haven’t had another one since but am hopeful that if I did, my shuffling might have stopped it getting any worse!

I would hope it's the same for you too, Ogr!

I agree. All my readings bar one were better the 2nd time round, following a year of running 👍

Really pleased for you about your results. I am hoping when I get my bone density scan next year I will have improved. I am severe osteoporosis-3.5 hip and -4 lumbar. I had been doing running and a couple of 10 km but felt my hip and back hurting. Now on walking notsure if that will build bone density . Desperate to try running again but scared . Take vitamins adcal and not taking injections refused. So hopefully will improve. Mines will never get to osteopenia but am really pleased for you x🤗

grumpyoldgirlGraduate in reply to Doris8

Oh sorry to hear about your osteoporosis, I'm sure the walking will help. I can understand that you'd be worried about running again. Have you heard of Japanese slow jogging? That might suit you. My Pilates instructor has told me that that Pilates is also a weight bearing exercise because you are using your body's own weight to create resistance, so that might help you too.

Hi yes have heard of Japanese slow jogging and tried it. Maybe I was doing it wrong but I felt I was bouncing up and down too much and video doesn’t, but I suppose if your doing brisk walking your doing the same. Thank u 🙏

grumpyoldgirlGraduate in reply to Doris8

Yes you definitely shouldn't be bouncing! 😁

site for warm-up, or that site for cooldown, and another one for the main work-outs. All depicted...

😁), more than anything I wanted to hold on to that. I laughed at myself a lot during the C25K...

Fun with Fartleks and a 2nd 5K

explore the concept and to run another 5K.