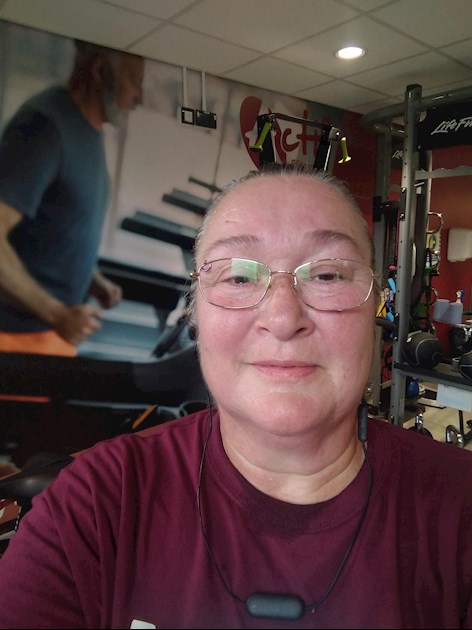 Well, I never thought I'd be writing this, but I did the dreaded 20 minute week 5 run 3 run this morning. Not pretty and VERY slow, but I did it 🏃‍♀️💪🏃‍♀️ 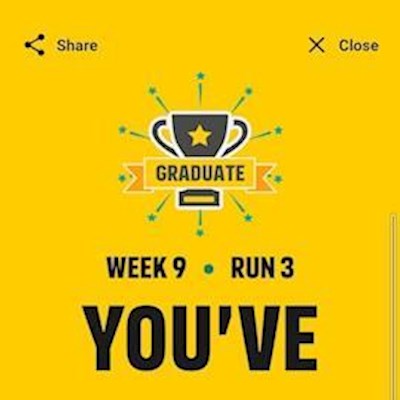 Over60sRunner
Graduate
To view profiles and participate in discussions please or .
46 Replies
•

Well done and you have proved that referring to it as "DREADED" is totally unnecessary.

Stay nice and slow for the next run........it catches out more people than any other run in the programme.

That is a lovely photo of you Over60'sRunner, congratulations on completing run 3 of week 5, that is a milestone run with C25K, onwards and upwards to week 6 run 1 but be careful about that run as it catches out some people with the interval walks and runs after the non stop 20 minutes of W5R3 which you have just ran 🏃🏾

Thank you. Forewarned is forearmed 😀👍😀

I see a proud happy woman in the photo , who has achieved so much in such a short time. Enjoy week 6,run 1, I did that run this morning.. Just do what it says on the tin and you will be fine.

Hopefully dreaded no longer? You have just proven you can do something amazing! Keep it that slow and you'll have no problem graduating

Yay well done you. The skies the limit!! Good luck for next week 😊

That's it. You've over half way through. Get through week 6 (which still has some surprises for you) and it's plain sailing to the end.

Fantastic! I’m in awe of you! I pretty much failed week 1: Run 1 this morning… this post has given me the motivation to start again x

You got out and gave it a go, so you didn't fail. If you struggled, it's probably because you went too fast. I think most of us did the same, thinking we should be 'running', when actually you should be aiming for a slow jog, so that you end each running phase feeling like you could keep going just a little longer. I was almost running on the spot at times during my c25k, there is no such thing as too slow, as long as you keep your legs moving! Also, don't worry if you can't complete a run first go, just repeat until you can - it took me (and some others) months to complete. The most important thing is to just keep going until you get there!

Katy, if I can do it pretty much anyone can. I'm 62 in just over a fortnight, I'm obese (still over three stones over my healthy weight, despite having lost 12lbs already), I've got high blood pressure and I've recently been diagnosed with diabetes.

If anyone had told me ten weeks ago that I would be running for twenty seconds, much less twenty minutes, without stopping I'd have laughed at them. Repeat runs, or even whole weeks, if you need to - run at a snail's pace if you have to (I do!) just don't give up 👍💪👍

Well done, youngster! If you can do W5R3 you can do anything C25K throws at you. Enjoy the journey, nice and slowly.

Over60sRunnerGraduate in reply to Seaside22

Thank you. I woke up this morning thinking for the first time that I might just be able to complete this! It going to be slow and ugly, but thirty minutes actually looks achievable

Well done Over 60! You're on a journey of discovery to finding out what your body can still do. Treat it well, stay positive and you will be pleasantly surprised. Slow really is the key, go as slow as it takes to keep going and Graduation, better health and wellbeing will be yours - best wishes ☺️

Absolutely incredible!! Well done you - going to keep at it?

Still got 3 weeks to go until I complete and graduate, so yes. Beyond that, I'd like to work on my speed so I can actually achieve 5k in 30 minutes, as I'm still way off that just now!

A note of caution - many people never achieve 5k in 30 mins. I'm not saying you won't, but don't feel despondent if you can't. I consolidated at 30 mins for quite a few weeks, and I'm now concentrating on trying to do some slightly hillier routes, and to run for longer. I'm hoping that by doing that, my 5k time will get faster, but I'm not sure whether 30 mins will ever be achievable (38 mins on the flat is my fastest so far, and that felt hard work!). Whatever your goal after c25k (speed, distance, time running), my thought is that it's good to make the goal small and achievable, that way you have the motivation of achieving something on regular intervals... then you set the next one!

At the moment, I am just focussing on actually running for 30 minutes, no matter what the speed is! I strongly suspect I'll never be a 30 minute 5k runner, but if I can do 5k, even if it takes an hour, I'll be chuffed to bits.

Eleven weeks ago I couldn't run for a bus, so any improvement is a big achievement for me. My plan going forward is to start raising the speed and incline by small increments on the treadmill. I live in a very hilly part of Wales and I'm not sure if I will ever get out onto the roads, but I don't mind if I always run on the treadmill TBH as long as keep running (well, jogging anyway!) 🙂🏃‍♀️😀

I know the feeling, I never thought I could run for more than a minute at a time so I'm so chuffed with myself whenever I get back from a run regardless of how slow it is! It's a shame that running outside is so difficult as I find it more motivating to be outside (plus you have less inclination to stop as it's still a long walk home!), but I understand the hills, especially as a new runner, so a treadmill is a great way of getting a run in. I look forward to your graduation post in a month or so

I completed all C25k on my treadmill and I’m like you I don’t think I’ll ever do 5K BUT I can run for 30 minutes which I never thought would be possible. I’m trying to consolidate at the minute and the plan was that I would then try running outside. I’m not sure I will though - it’s definitely not a pretty sight when I’m finished the run 🥵🥵🥵🤣

Well done. W6R2 caught me out after that. Had to repeat. If you can do this you can do 25 when it comes up and then 28 is only another 3 minutes, etc. That's what I told myself. It's all in your head.

Thank you. Yes, I am just starting to realise it's as much about the psychology as the physicality. I really didn't think I'd do 20 minutes until I gave myself a "Gibbs slap" and said do it if you can and don't worry if you can't! And, guess what, I did it!!

I just kept telling myself, "If Laura says I can do it - then I guess I CAN do it"!

Love every minute of every achievement! I’m 53 and did C25k earlier this year and feel completely hooked now. Well done, you. You’ve joined the red-faced, sweaty club 😂

Thank you. I am 62 in a fortnight, obese, with Type 2 diabetes and high blood pressure. Who would believe that I could do this, but I am 💪 Onwards and upwards - hopefully downwards for the BP and weight though!!

It’ll be interesting to hear how this impacts your BP and diabetes, which it’s even more likely to help than weight. 👏🏼👏🏼

There's been a definite impact on both my pulse rate and my BP over the past 8 weeks since I've been home monitoring.

I've already dropped 2mmol of my HbA1c (which measures your long-term blood sugars) in 4 weeks and am back for another blood test in October. If I remember, I'll let you know if it's dropped more. I am pretty sure it will, not just because I am losing weight, but also because exercise does have a direct correlation to lower HbA1c levels.

Thank you and well done to you too. I never thought I would get this far as I REALLY struggled with weeks one and two, but it's not so bad now...although it's still not plain sailing I actually feel I might finish at a snail's pace

Well done over60srunner. Great feeling that 20 minute run isn't it. I'm just 2 runs in front of you. Take the advise and keep it slow. Worked for me and didn't find w6 as bad as I thought it might be with the warnings. I too am a dreadmill runner as it works for me. Not sure I'd stick to it if I had to go out in all weathers but figure so long as we keep moving it doesnt matter where we do it. Great picture. 👏

Thank you. I feel the same as you - as long as I'm running, does it really matter where?

I also find having to book a slot and getting reminders from the gym that I'm booked in the day before is great for motivation. Not sure I'd be the same if I was running from home, and the really hot weather would definitely have put the mockers on me as I have a problem regulating my temperature - and especially the hotter end of the spectrum. At least the gym was a little bit cooler and I bought a clip on fan which also helped keep me comfortable. Hopefully the 30+ temperatures are now behind us for 2021 now - I'm useless at anything above 22 or so

I did it! Week 9 run 3 completed early this morning when it was still cool!! Different route. I...

Gobsmacked but I did it

finished week 3 I thought week 4 looked absolutely impossible but wahoo I did it. I've run for 16...

goddesses are out running. I never believed for one minute I would be able to run for 60 seconds...

This morning I ran for 21 mins and 30 seconds on my short little legs.