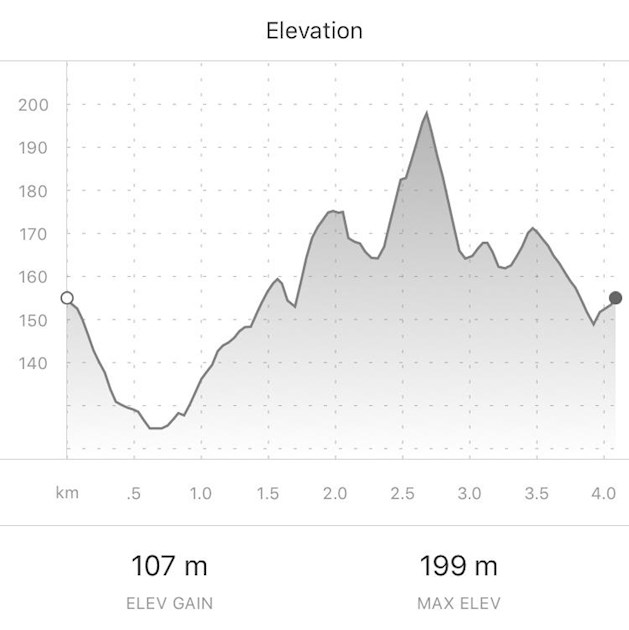 Wow I feel great! I decided that today I was going to tackle my nemesis hill and while I was at it, another longer but similarly horrible hill at the same time. Why? I have no idea!!

So after walking my children down most of the way to school, Jo told me to start running and off I went to cries of BYEEEEE MUMMYYYYYYY 😍

I knew the first part of the route was uphill but relatively gently and I’ve done it a few times so it doesn’t cause me much anguish but then I got to the first slightly steeper incline that I’d forgotten about, leading to a very steep and long hill. My thighs were killing so although I knew my legs weren’t dropping off (!), I turned downhill a few times just for ten seconds or so to keep running but give them a break. I was determined to break the hill and also definitely NOT to walk! (That’s the 199m point in the photo.)

Once I got that hill out of the way it was along to what I have always thought of as my absolutely nemesis - the short 20% hill near my house that is horrible to drive up, let alone run. And do you know what - it wasn’t so bad 😃 After the length of the other one it was (whisper it) almost a breeze and you can barely see the blip on my graph below (I think it's the 3.5km hill).

First time I’ve got back from a run though with a pounding hot head and feeling ever so slightly ill. Fine now after 15 mins and water thankfully.

Hills don’t scare me any more!

Wow! I really hate hills but have started including them in my runs. Will never like them! Well done!!

southlundonGraduate in reply to Ang33333

Well done Ang! I wish I had the option to leave them out but I don't really where I live

Good for you 💪😃👍🏃‍♀️ It took me ages to tackle hills. I had two, which I named, Hill of Death and Slope of Doom. Know thine enemy 😃

Oh I should definitely name mine! 😆

After my wonderful Parkrun experience on Saturday in a fit of overexuberance I decided to run a...

Running Up That Hill - No Problem

Ventured out for a Stamina run last night having had a few days off, and to run a route that I used...

Week 8 run 2 - no stopping me up those hills

like my right foot is running slightly curved for most of the run and I try to run more centrally...

and now am not sure I will be able to run anymore this week. I knew better than to let myself feel...

especially as we are away at the coast for the Easter break and i excused myself this morning to...

Week 6 Completed and a crisis of confidence 😬

Some people feel the rain.....