Stepping Stone interval podcast: I re-loaded the... - Couch to 5K

I re-loaded the C25k+ podcasts back onto my iPod at the weekend and did the one which is the interval running (Stepping Stone?) mainly because it's a short podcast at under 30 mins and I was short of time but felt compelled to shoehorn some running into my weekend!

I've done these podcasts before a few years ago when I first graduated but do any of you use them regularly as part of your training (I think there is one called Speed and another called Stamina)? I found on this one the slow bits were too slow for me (surprisingly!) and had to take tiny little baby steps to stay in time to the music or I felt like I was trying to "hang" in the air to keep time!!! The fast bits were OK but I couldn't have kept that speed up for much longer than the minute bursts. I guess that's the whole point of it though, to push yourself (and I need that discipline).

Can anyone recommend any other similar podcasts of about the 30-40 mins length that will give a bit of variation to shorter runs and push me further? 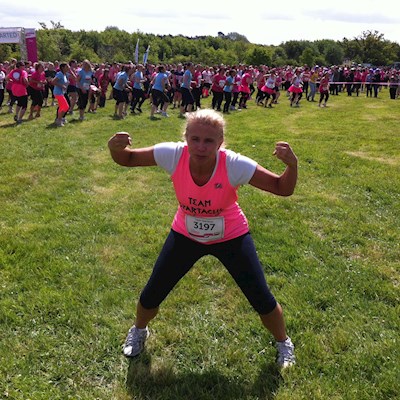 Nobbywatts
Graduate
To view profiles and participate in discussions please or .
12 Replies
•

I use them a lot! The one you describe as leaving you hanging is good for the legs. Keeps em guessing 🙂 Good for leg building. Running is not all about speed.

This is the Speed podcast i believe. Short so great when you need a quick run.

I do Speed and Stepping Stones quite regularly now as I need to increase my pace. I dont like Stamina, i find it very hard at the moment but I will master it eventually!

That would be Speed, it's 16 mins of intervals plus 5 mins warm up/cool down. Stepping Stones and Stamina are similar-ish in time, 20 mins main running with some warm up/cool down at start and finish. They are largely a matter of taste, most people seem to prefer Stamina. There are a couple of other interval runs on the Audiofuel website, but not free....if you find anything interesting do let me know!

As others have said, the one you are referring to is Speed (interval training). I use this one (like you) when I'm pushed for time but want to get a run in.

If you are finding it too easy, have you thought about going back to one of the early weeks C25K episodes that were run/walk, and instead doing them as a fartlek-type run ... with jogging for the walking periods and faster running for the 'runs'?

I have also just discovered Zombies! Run! I haven't quite got to grips with it yet, but it has a feature called Chase which allows you to basically set up an interval session. The app prompts you to speed up to outrun imminent zombies. You can (it would seem) specify the % you want to increase your speed for the Chase intervals. There's a paid-for version, but also a free one.

NobbywattsGraduate in reply to 50NotOut

That's a very good idea, about using the earlier podcasts for intervals - why didn't I think of that?! I'll check,out the Zombies thing as well - is it like a kind of story?

The premise is that zombies have taken over, and you are one of the 'runners' who leave the base on missions to collect stuff like medical supplies and other equipment.

The story builds up over each one, and the stuff you collect as you run can later be used to pay for upgrades to the base, strengthen defence etc. Its not a game as such, although it has game elements.

There are also some stand alone runs of 5k, 10k etc that build up back-story (i think), and they've recently added a training programme element to it.

I'm only just starting, but I think it will add just that extra bit of interest and motivation I need. (I graduated 2 yrs ago and am still running, but it's getting a bit boring.)

NobbywattsGraduate in reply to 50NotOut

I know what you mean, I've been downloading podcasts of Desert Island Discs just to have something different to listen to. The annoying thing is that the podcasts only have shortened pieces of music (something to do with licenses) so you're just getting into the track and it fades out! Still, the talking bits are interesting (if you like the person being interviewed!) and it does make the time go quickly!

I prefer music (rather than talking) because I like something that drowns out the sound of my huffing and puffing and thudding feet! lol

A couple of times, my music has failed and it was awful to realise how I sound to innocent passers-by!

I'm currently using Speed for an interval session once every couple of weeks, and a modified version of Stepping Stone (duplicated 5 mins of the 150bpm section, total about 35 mins) for at least one of my weekly runs as it gets me up to 5K distance. I love 'em! Done Stamina once, intending to dust it off and try it again soon though as I know I can now do 35 minutes running and still feel quite strong at the end if I haven't gone off too fast. It's taken a little while, but I now feel pretty comfortable running at 150bpm pace - I can manage gentle uphills no problem, maintain well on the flat, and even recover somewhat going downhill at that cadence.

I've toyed with the idea of making my own custom tracks to run to, but to be honest all the faffing around would take too much time. Maybe at some point I'll actually go through some of my music collection and check BPMs to set up a proper running playlist, but for the moment I'm happy to go with Laura!

That's what 50NotOut suggests above - seems like a good idea and also, it's over 3 years since I did those early podcasts, it will be interesting to listen to them again!

Thanks, all, for your suggestions! 🙂

minute) for running. I’ve heard others say that slow steady runs are what builds our running legs...

I ran to the stepping stone podcast today for the first time and was puzzled by the cadence Laura...

twice, speed once and stamina once per week.

However, I tried the stepping stone podcast a couple...

Confused by the Stepping Stones podcast.

week, I've moved onto the Stepping Stone podcast today for the first time.

Has anyone used the speed podcast ? I have been using the first one for several months but am...