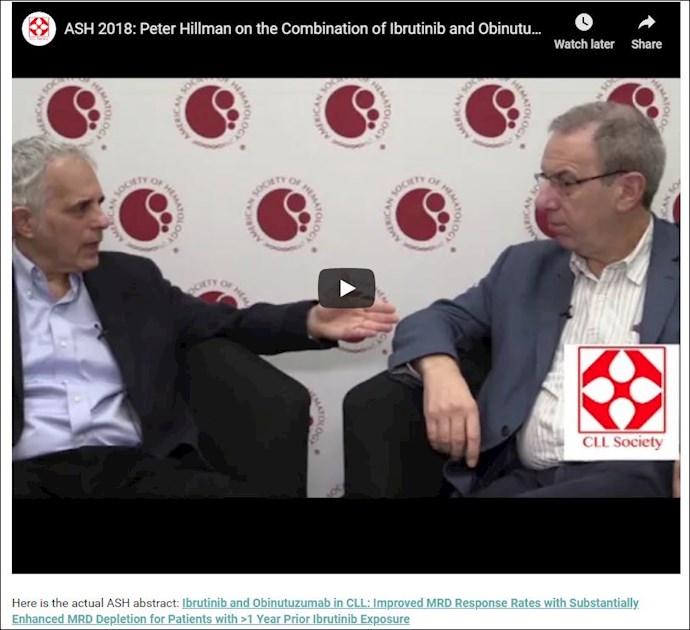 Today we start with an important abstract from the United Kingdom that may have significant immediate and future treatment implications.

Professor Peter Hillmen .... has chaired the chronic lymphocytic leukaemia (CLL) trials sub-group of the National Cancer Research Institute (NCRI) in the UK since 2002.

He has lead the UK, and perhaps the world, in developing fast moving, clinically relevant and responsive trial design. In fact four years ago at ASH 2014, we discussed his innovations in trial design (Trials Acceleration Program or TAP) in this interview. The IcICLLe Extension study is an example of this quick, responsive clinical trial process.

In this case, Professor Hillmen and his team tweaked a trial of patients taking ibrutinib (Imbruvica) by adding in the anti-CD20 monoclonal antibody obinutuzumab (Gazyva) to deepen the remissions and the results were both positive and surprising.

Adding obinutuzumab to ibrutinib deepened the depth of remission in relapsed/refractory CLL patients.

It matters when the monoclonal antibody is added for chronic lymphocytic leukemia patients.

Patients receiving obinutuzumab after >1 year prior ibrutinib on its own achieved a higher response rate compared to those who started the two drugs together. The complete response rate or complete responsewith incomplete blood count recovery rate (where some of the blood test have not returned to normal) were 50% versus 30%.

A higher proportion of patients receiving obinutuzumab after >1 year prior ibrutinib on its own achieved bone marrow U-MRD4 (where less than 1/10,000 cells is a CLL cells) namely 50% versus. 6%. In other words, ½ those patients cleared their bone marrow of detectable CLL with the sequenced combination compared to only 6% who started the two medications at the same time.

There were also no infusion reactions in those who were on ibrutinib for a year before adding obinutuzumab. This may be due to ibrutinib’s effect on the T cells dampening the immune response to a foreign antigen (protein).

It is important to remember that response rates are less critical to patients than survival data, and that adding a different older anti-CD20 antibody, rituximab to ibrutinib has yet to show a survival advantage.

The addition of obinutuzumab may tell a different story and it certainly seems that the sequencing matters. That is something new and exciting with potential broad therapeutic implications.

In my interview from the last day of ASH 2018, Dr. Hillmen speculates on those specific issues.

Here is the interview:

This was fascinating. I’m preparing to be included in a trial using Gazvya soon and wonder if this data will be used?

Even so, if this plays out, both of these drugs are currently approved for CLL and doctors can sequence them this way.

Name-1 in reply to Justasheet1

Jm954Administrator in reply to Name-1

Ibrutinib first then, after several months (a year), the obintuzumab.

Thanks for posting this. Would you explain it to me, as I am having trouble understanding what this is saying. Is it saying that it is better to sequence obinatuzimab first, and then do the ibrutinib? The >has me confused. I imagine it is the other way around because it goes on to say that less side effects with o following i. Which sequence has the best MRD results? Thanks for your help.

Jm954Administrator in reply to Bar68

Ibrutinib first then, after several months (a year), the obintuzumab.

MsLockYourPostsVolunteer in reply to Bar68

Barbara - I assume the arrow is used in a similar way to what it represents in math. Open end, bigger number is what I told my students. In this case Ibrutinib, being given longer would be equivalent to the bigger number.

Giving Ibrutinib first for a year and then adding obinituzimab caused more MRD- responses (deeper responses) and less infusion reactions from the obinituzimab.

Despite many trials with Rituxan and Obin/Gazyva given first or simultaneous with new targeted therapies like Ibrutinib and Venetoclax. This result clearly says there is a strong benefit to giving Ibrutinib/Imbruvica for 1 year or more and THEN giving Obin/Gazyva to reach MRD neg.

I feel certain it will take several other trials to confirm this result. As Dr. Furman often says "We need more data!"

Then someone will try stopping the Ibrutinib & Obin/Gazyva to see if there is good PFS progression free survival for a few years after stopping treatment, and good Overall Survival.

And eventually some trial will start with Ibru/Imbru then add Obin/Gazyva and later add Venetoclax/Venclexta to see if the triplet sequence is on the path to a cure or at least a 10+ year remission for many patients.

Intriguing. So if people currently on Ibrutinib for one year or more add Obinutuzumab, they could significantly enhance their chances of getting to MRD-?

That is what happened to 50% of the people on the trial - but remember there were only 10 patients on that arm and 50 patients on the entire trial, so a bigger population and more diversity will be needed to predict how repeatable this is world wide.

See the tables and graphs in the paper: ash.confex.com/ash/2018/web...

I would love to know what Dr Furman’s impression of this would be? You know anyone that has his 👂? 😂

You ask we deliver:

It is always most important to look at progression free survival. The data from the PCYC-1102 data (7-year data presented at ASH 2018) suggests that almost all of these patients will likely get to CR with just ibrutinib. The question has to be whether there are any additional toxicities and whether anything was gained from the obinutuzumab. One possibility might be being able to discontinue ibrutinib, but those are data that won’t be available for sometime.

Subject:- Justasheet1 replied Len, I would love to know what Dr Furman’s impression of this would be? -

Wow, thanks Len for doing that. It was completely unexpected.

Getting his opinion on this makes me excited about the future. Cycling on and off the meds could end becoming refractory to them. It seems we’re always waiting for more data.

Sounds like Dr Byrds prediction of baking a cake of cure is coming to fruition !! youtube.com/watch?v=eF0XsRg...

Do you mention cake? I’m starving. Dr Byrd is awesome.

This is important data though PFS and overall survival are much more important. The debate will rage as to whether just stay on Ibrutinib for years as the remissions deepen and the vast majority of patients who can tolerate front-line do great, or add a second drug and be able to stop. I suspect that is the future, but only more research will tell.

ASH 2018: Dr. Chadi Nabhan on the Cost of Ibrutinib vs. Chemo vs Chemoimmunotherapy in CLL and on way too much chemo being used.

2017 on the total cost of care for CLL patients who took ibrutinib versus chemotherapy or...

Has anyone been on the combination therapy of Venetoclax, Ibrutinib and Obinutuzumab?

the combination of Venetoclax, Ibrutinib and Obinutuzumab (Gazyva). My CLL is completely resistant...

with patients who received obinutuzumab plus chlorambucil: 88% vs. 64%. Overall response rates also...

multicenter open label trial of the combination of IPH2201 and ibrutinib in patients with relapsed...

Defend your space with a loud T-shirt - "#stillatrisk PLEASE...