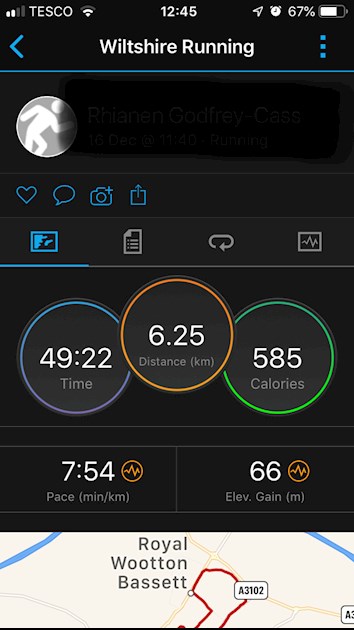 First run in the new shoes today. Much more comfortable!!

I was meant to be following ju-ju’s plan but with one thing or another I’m only managing to run once a week at the moment so have had to put that on the back-burner. But I thought I’d venture a little further on my run today. I’ve gone to 7.5km once but I decided I’d run from home today so kept it a bit shorter (I’ll explain why below).

I also had a really lovely realisation. So I haven’t run from home since I started park running, mainly because I live at the bottom of a fairly decent hill and park run was the first time I’d ever managed 5K without walking and then feeling rubbish about myself. So I’ve just run the park run route, even when I’ve run alone, since early October. And before that I’d hardly run at all since summer. Anyway, today I thought about going to the Park Run route and stopped myself, today I ran from home. Which long-windedly gets me to my rather pleasant realisation; I am now capable of running 5K, from home, absolutely fine. In fact I did 6.25K!! 💪💪💪💪 The last KM felt hard, but it will because it’s longer than I’ve ever regularly gone before.

I also managed to keep under the 8min/km which I was super chuffed with as that’s my ‘base’ pase for want of a better description.

Today was a good run 😊

Well done DR - it's lovely being able to run from home!

Thank you, yes makes it a bit easier and saves paying to park too!

Nice! Running might be sporadic for you at the moment, but you're getting out and getting great runs in when you can. You're doing great! Today's run sounded wonderful; congrats on achieving your base pace - learning to slow down is definitely a learned skill and you're nailing it.

Yay! Well done mate!!! That's super news - a lot less faffing about needed when running from home :). You're on your way up and if you can cope with that hill then the Lydiard incline will feel like a doddle

Take a look at Strava or MapMyRun for some routes in RWB: the WB Hounds tend to post their runs on those platforms and it'll give you some options.

Thanks 😊😊 it was rather a snail like shuffle up the hill but I made it 💪 I will have a look at the routes, thank you, be good to do something different than the same old loop!

A shuffle is fine! You'll be amazed at how that'll improve your running - same as hill-training for horses :'D

ofcourse there is no shade on my route. At thecoast today, so back in my beloved polders between...

My first 6K and no gremlins

normal route which I’ve done for 5k runs, which takes me to the park but this morning it’s 6k so...

back injury and didn't run for 2 weeks. After a couple of shorter recovery runs I did a fairly...

Quilt To 6k With The Help of A Rocket 🚀

to go out today as once I was out there I felt energised and had a really enjoyable 6k run, I felt...